Growth in American audiobook revenue by genre was led in 2021 by romance, self-help, and science-fiction, per the Audio Publishers Association. 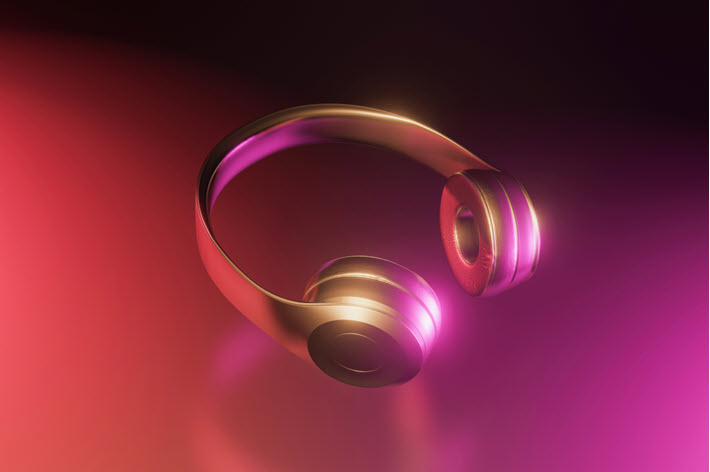 Another golden-headphones report, today’s data (June 7) from the Audio Publishers Association announces a 10th year of double-digit growth for audiobooks in the United States’ audio-avid market.

The source of today’s news is a sales survey produced for the association by the San Francisco-based InterQ Research. It shows a 25-percent rise in American audiobook revenue in 2021, to a total US$1.6 billion.

The Audio Publishers Association, as Publishing Perspectives readers know, is the nonprofit trade association established in 1986 and let by executive director Michele Cobb. In addition to providing its services to its industry membership and research on the market like today’s information, the organization is also behind the annual Audie Awards.

Cobb tells Publishing Perspectives, “We’re pleased to have a decade of double-digit growth as audiobook market expansion continues to exceed expectations. Our members impress consumers with the breadth and creativity of productions and they reward us with more listening.” 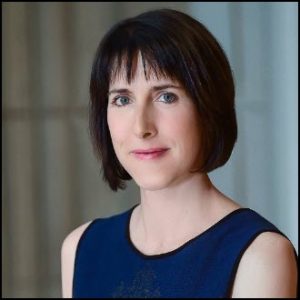 In explanatory commentary for the news media today, the association writes, “Nearly 74,000 audiobooks [titles] were published in 2021, a 6-percent increase over 2020.”

“Science-fiction and fantasy narrowly edged out mysteries, thrillers, and suspense as the most popular genre by percentage of sales, with romance and [general] fiction following close behind, and increases in children’s books and young-adult revenue. The romance genre experienced the most growth with a 75-percent increase in revenues, followed by self-help at 34 percent and science-fiction at 32 percent.”

As in the past, the association has also run a consumer survey with Edison Research, some of the results of which are:

The consumer study is a national survey of Americans 18 and older who have ever listened to a complete audiobook. Edison Research completed 1502 online interviews in January and February. The data was weighted to the audiobook market, as measured by The Infinite Dial, “a nationally representative survey of the American media landscape” conducted by Edison Research and Triton Digital.

Edison Research also does a “Share of Ear” report, tracking daily listening habits of American consumers aged 13 and older. From that survey, Audio Publishers Association is reporting that:

The Share of Ear data is based on a Q1 2022 report comprising more than 4,000 interviews with Americans 13 and older. Respondents were asked to keep a comprehensive diary of all listening over one sample day. Diaries were administered either online or offline, and in English and Spanish. 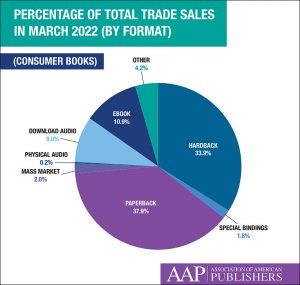 As journalists will do, we always like to offer a mild reminder that while enthusiasm for audio products in general and downloaded and/or streaming audiobooks in the United States has certainly grown, it’s interesting to note that the Association of American Publishers‘ (AAP) monthly StatShot reports show the share of downloaded audio running—for example, since January—between 6.9 and 9.8 percent.

As an example, in the AAP’s graphic to the right, you see downloaded audio at 9.0 percent for March.

This is not to throw cold water on the performance of audio and audiobooks in the American marketplace. During the still-ongoing pandemic, many people clearly have expanded their consumption of audiobooks. In fact, this reporter may be one of those people now listening to substantially more audiobook content than before.

But when stacked up against other formats, downloaded audio—the product that has made audiobooks a sort of “reborn” success over the days of cassette tapes and CDs—has continued to hold a share of less than 10 percent of the American market, despite the decade of impressive growth captured by the Audio Publishers Association’s annually helpful research projects.

It’s good to keep in mind, then, that for the understandable excitement around audio, there’s still, as Elsevier’s Michiel Kolman likes to say on other subjects, “room for improvement.”

More from Publishing Perspectives on industry statistics is here. More from us on the Audio Publishers Association is here, and more on audiobooks is here.