Formulating Readmagine in Madrid, the Fundación Germán Sánchez Ruipérez’s Luis González is impressed with what ‘outsiders’ may offer. 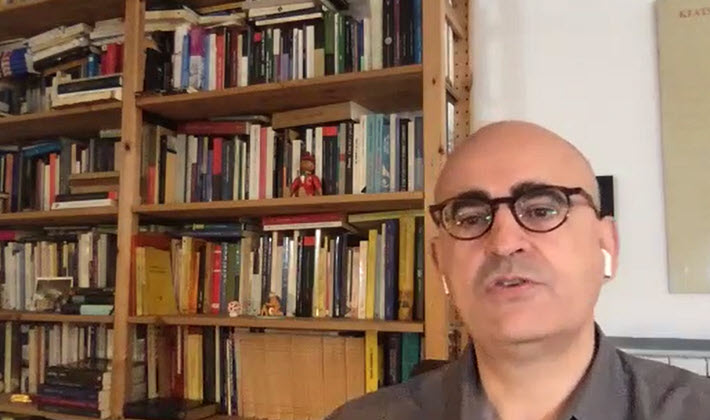 Luis González: ‘New Skills Have To Be More Inclusive’

One of the most interesting elements of how Madrid’s Readmagine publishing program has presented itself to the industry this year has been its “relative weight of topics to be discussed this year” graphic. And in a year when the show’s founding director says the general thrust has to do with the United Nations’ Sustainable Development Goals (SDG), “both in reading and in the work the publishing industry is doing,” sustaining a conference’s own momentum has been an issue to consider, too.

Since its first edition in 2005, the Readmagine series of conference events—organized by the Fundación Germán Sánchez Ruipérez (FGSR) in the Spanish capital’s extraordinary Casa del Lector complex—has focused on “the process of transformation of reading and books.” In the service of that goal, the program hosts “encounters among publishing and digital, urbanism, sociology, fashion, marketing, video gaming, and other fields of action.”

But a hallmark of this approach in the hands of Readmagine’s founder Luis González, director general of the Germán Sánchez Ruipérez Foundation, is grounding.

In lesser hands, talk of innovation and new directions in book publishing frequently veers toward wishful thinking and facile assumptions. One way González this year has countered those tendencies is with a graphical analysis of “the relative weight of topics to be discussed this year.”

As it happens, that table (below) shows us that social impact is the by far the strongest driver, at 60 percent of the relative weight. This, in itself, carries an important message to many in book publishing, in part because the consumer-driven dynamic of the industry remains a challenging fact of life for many professionals in the business. New business models come in next for relative weight, at 35 percent.

“Behavior trends,” closely related to social impact, of course, takes another 25 percent. And then other elements follow with “digital transformation” down to just 20 percent this year—a realistic and helpful assessment that the transformation largely has happened, and that getting on with the broader work of publishing is the way to go.

Sustainability and Publishing Events in Transition

In terms of event sustainability—not the criterion that many publishing program producers might happily have chosen—this month’s May-June collision of international publishing events has been epic, making the drawing power of González’s Readmagine at the foundation in Madrid all the more impressive.

Some events this year quite logically have been moved on the calendar to avoid restrictions relative to the still-ongoing COVID-19 pandemic. For example, the Jerusalem International Book Forum is a biennial gathering specialized to world publishing’s leadership, which originally was scheduled for last year. The impact of the coronavirus on that Israeli program rightly was to move the forum’s second in-person edition from May 2021 into this year.

There also have been welcome new events added to the publishing calendar, even as they landed atop the already packed springtime roster of events.

Ahmed Al Ameri‘s Sharjah Booksellers Conference at mid-month, was one such new event, with its debut set on the Jerusalem event’s dates. And the new and important World Expression Forum (WEXFO) in Norway has just had its inaugural outing this month, as well, dovetailing in Lillehammer with the start of Readmagine in Madrid.

González: ‘An Industry Problem of Narrative’ 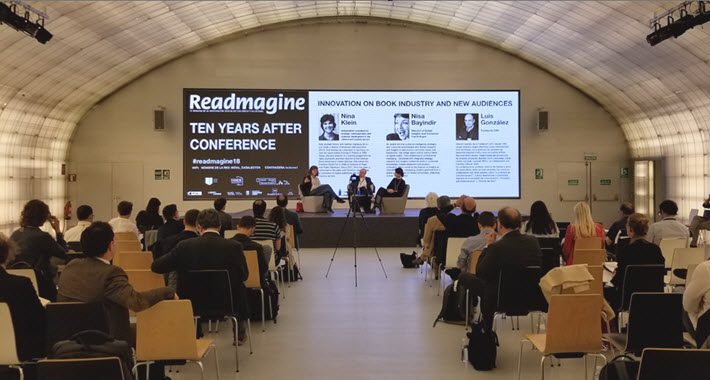 At Madrid’s Readmagine focus on ’10 Years After,’ in its 2018 iteration in Madrid. Image: Publishing Perspectives, Porter Anderson

In conversation with Publishing Perspectives ahead of this year’s iteration of Readmagine, González describes a strategy that has stressed the geographical realities of the contagion’s progress in the past two years.

“The industry really hasn’t been able to explain the positive impact that publishing has for the whole society—in integration, education, economic growth, the quality of the jobs that they offer, even its positive impact on health, precisely as we were talking about the pandemic.”Luis González, Fundación Germán Sánchez Ruipérez

“I think this year is the first ‘normal’ year,” he says, since the original coronavirus outbreaks “because last year we did a European meeting. We thought that people from Latin America or America in general wouldn’t come. So it was shorter than the rest of the years.

“In 2020, we had an online edition” as the impact of the pathogen and its variants landed with full force on so many world publishing markets. “And we had that in November, in 2021,” he says, “because I thought that during those months in Spain or Europe, the situation would be better than in June. And it was really it was very interesting as a European meeting. We were more focused on European policy-making for the industry and for reading promotion.

“This year is different,” he says, with a wider purview possible and yet a European focus in attendance likely, as travel from the Americas has at times this spring remained challenging and from parts of Asia all but impossible.

And this is where a discussion with González—with the high view that his foundation seat provides—becomes so interesting. In Spain, as in other parts of Europe, he says, “We have an industry problem of narrative.

“The industry really hasn’t been able to explain to society the positive impact that publishing has for the whole society—in terms of integration, education, economic growth, the quality of the jobs that they offer, even its positive impact on health, precisely as we were talking about the pandemic.

“This became important because in Spain and in other European countries, finally some general journalists, members of society, understood how good reading was for them. This impulse, trying to explain to the industry that we need to renew the narrative about the contribution that books and the publishing industry are making to society—that’s the general framework of this year.”

To that end, Readmagine has opened this week with a day set in Spanish, and then two days in English, and with elements related to the United Nations’ Sustainable Development Goals.

During the week, sessions have included a presentation led by González on libraries and the UN’s SDGs, and on Wednesday (June 1), María José Gálvez—Spain’s general director for books and the promotion of reading at the Ministry of Culture and Sports—spoke in Madrid about the coming Guest of Honor Spain programming at Frankfurter Buchmesse (October 19 to 22).

Elsevier‘s Michiel Kolman—well known to Publishing Perspectives readers for his work with the International Publishers Association (IPA) as a past president focused now on issues including diversity, equity, and inclusivity, which ties into his work as co-chair of the Amsterdam-based Workplace Pride—led a sustainability-minded round table, “The Green Publishing Strategy,” with Paxti Beascoa, commercial director with PRH Spain, and Grupo Planeta’s supply chain director Juan Mera.

Arantza Larrauri of Libranda has moderated a talk on digital marketing tools with Jellybooks founder Andrew Rhomberg and the ubiquitous Nathan Hull of Norway’s Beat Tech.

González: ‘Being Generous: The Smartest Way To Be Selfish’

If anything, some of the themes that González  and the foundation have opened this year may well warrant further development for the 2023 Readmagine (June 7 to 9), not least because—as in many industries—González is perceiving the value in opening even as specialized an industry as book publishing to the benefits of those from “outside.”

“During these days” of this year’s conference, he says, “we’re talking about collaborations with libraries, about teenagers’ communities, and green publishing, about digital tools to avoid extra environmental or financial costs, and about the ‘rescaling’ and ‘upscaling’ of newcomers into the industry.” He uses the example of the Madrid economy which has benefited from highly skilled and capable immigrants from Latin America, people “coming for economic reasons, political reasons. It’s pretty clear now to economists,” he says now, “that they’ve fueled the economy of Madrid.”

Likewise in publishing, he says, “New skills have to be more inclusive.” And, as many Publishing Perspectives readers know, many publishing professionals may initially think that their own industry and interests are so specialized that opening doors to talent from outside the industry might not be the best course.

González says, “I tell my daughter that it’s a good thing to be generous because it’s the smartest way to be selfish. If we want to live in a good society, to be comfortable, to be safe, okay then, let’s be generous” and take a serious look at what “outsiders” may be able to offer to publishing as it jockeys for consumers’ attention among so many competing entertainments.

“Okay, let’s be generous,” Luis González says, “because then, you know, integration”—as in the case of the wider society, as studied by economists in Madrid—”the publishing industry is going to be very profitable.”

Here’s a video produced from the 2021 edition of Readmagine, with its purposeful European focus in place.