The ‘Book of the Year’ series of 14 content-related British Book Awards includes work from many familiar publishers. 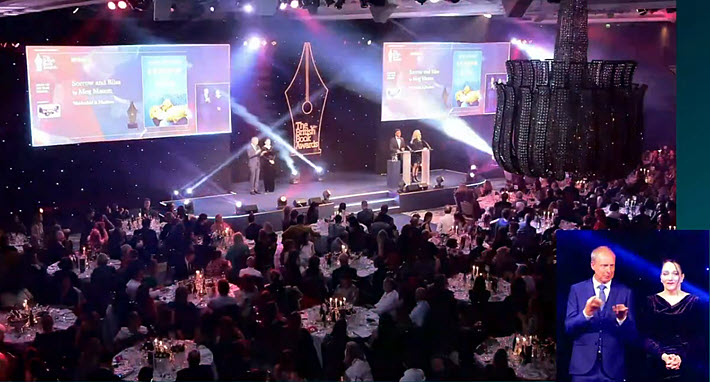 Philip Jones: ‘The Breadth and Power of Publishing’

In its annual awards ceremony Monday evening (May 23), the British Book Awards named Marcus Rashford with Carl Anka the winners of the overall Book of the Year category for the children’s book You are a Champion.

In addition, Marian Keyes was named Author of the Year, and Dapo Adeola was named Illustrator of the Year, as the show—also known as the Nibbies—returned to its pre-COVID-19 venue, London’s JW Marriott Grosvenor House. There, the program has the space and production framework to stage itself with the laser-light glitz and noise its fans enjoy.

The United Kingdom is the international book business’ leader in book and publishing awards—both in number of awards programs and in enthusiasm for them. This program, owned and ably produced each year by The Bookseller, this year has 31 categories, 14 of them content-related and 17 of them industry honors.

You’re able to see this, thanks to a good-quality digital stream of the proceedings, which we’ve embedded for you below.

As Publishing Perspectives readers know, the British Book Awards in 2017 were bought by The Bookseller, then under Nigel Roby’s leadership, from the estate of Publishing News’ founder, Fred Newman. Their reappearance that year ended a 13-year hiatus and the Nibbies have been a station of the cross on the British awards pilgrimage each year since.

In his role as chair of the British Book Awards judges, Bookseller editor Philip Jones is quoted, saying, “From the advocacy of Marcus Rashford and Dapo Adeolo, to the artistry of Caleb Azumah Nelson, Jade LB and Meg Mason, to the storytelling of Billy Connolly, Marian Keyes, Ian Rankin, and Cressida Cowell, to the history as told by Paul McCartney, Clare Chambers, Phil Earle, and Sathnam Sanghera, this year’s British Book Awards winners show the remarkable breadth and power of publishing today at a moment when the book—and those who make them—delivered.”

We have updated this story (June 5) with that the program’s list of trade industry winners, following the more public-facing “Book of the Year” prizes.

Less discussed than the “Book of the Year” content awards above are the annual trade awards presented by the Nibbies. Indeed, these may be of the most interest to our trade readership here at Publishing Perspectives.

Full lists of winners in both ranks, trade and “book of the year,” are here.

This is Publishing Perspectives’ 96th awards report published in the 98 days since our 2022 operations began on January 3.