As Many as 350 Exhibitors Expected

As the international springtime book-fair and trade-show (and travel) blitz heads for its conclusion, you’ll see organizers now beginning to stake their claim to various dates on the latter parts of the year’s calendar.

Spain’s Feria Internacional del Libro, “Liber 22,” is today (May 27) reaffirming its October 5 to 7 dates in Barcelona for the 40th edition of the show—with an emphasis on the export potential of Spanish literature.

That puts it less than two weeks ahead of Frankfurter Buchmesse, which this year will welcome Guest of Honor Spain.

The promotional language about the show reads, in part, “The event will promote business opportunities, business meetings, and knowledge of the book sector to boost the publishing market and boost sales, especially abroad.

“Organized by Fira de Barcelona, ​​Liber returns in person to the Gran Vía fairgrounds to show the wide range of publishers and service companies for the book sector, as well as public institutions and entities, various collective participations of guilds and publishers’ associations autonomous communities, and brands from a dozen countries interested in buying and selling publishing rights.

“The organization anticipates the participation of more than 7,000 professionals.”

One of the draws this year–in addition to its new illustration competition we highlighted earlier–is reported to be a “New Publishers area to encourage, with an agile and economical format, the presence of small publishers that have been in the market for less than three years.”

What’s expected to be an aggressively programmed group of guest programs, organizers say, will feature a “Buyers Program,” promoted with Spain’s economic and commercial offices and ICEX Spain Exports and Investments. That program is expected to invite more than 600 buyers, booksellers, distributors, and librarians from 70 nations to participate.

At the same time, the “Priority Interest Prescriptors Program,” offered in partnership with Acción Cultural Española and its program for the Internationalization of Spanish Culture (PICE), is to reach out to some 70 professionals from more than 20 countries, including librarians, literary agents, university professors, publishers, and heads of public bodies–stakeholders, in other words, who make acquisition decisions with the ability to prescribe or decide on the purchase of Spanish books.

At the same time, Liber will launch a specific program for invited national buyers to promote business meetings with exhibitors.

While the event is being held fully in the physical setting, Liber will once again have digital views of its activities for those who can’t be there in person. In the case of this show, organizers say, the digital availability will remain in place after the fair, which is particularly important in this case: the Liber is reported to generate “almost a third of the sales abroad made by the Spanish book publishing industry” in a given year.

A professional program is anticipated for the October show, with “conferences and activities of a professional and cultural nature with experts and personalities from the book world to exchange information, ideas, and experiences on the most current issues in the sector with the aim of helping the entire value chain of the book to face technological, economic and consumer changes. 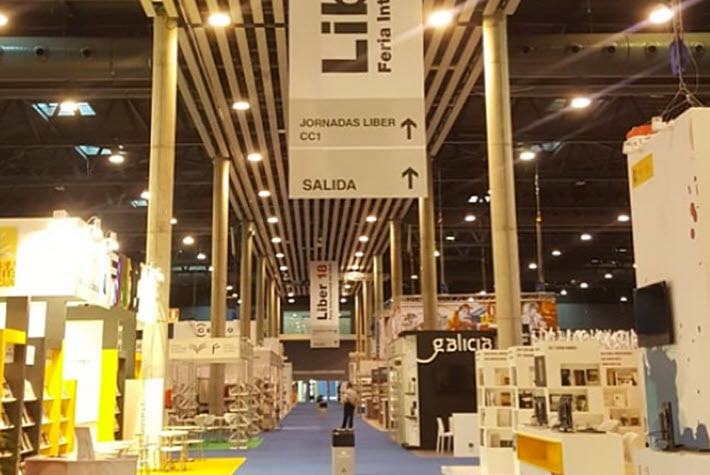 Another anniversary stomp, the 60th doing of the Bologna Children’s Book Fair has chosen March 6 to 9 for its dates in 2023.

In this case, that show will precede London Book Fair, which is set for April 18 to 20, with a new director, presumably, as Andy Ventris, you’ll recall, is stepping away.

This is Publishing Perspectives’ 99th awards-related report published in the 101 days since our 2022 operations began on January 3.