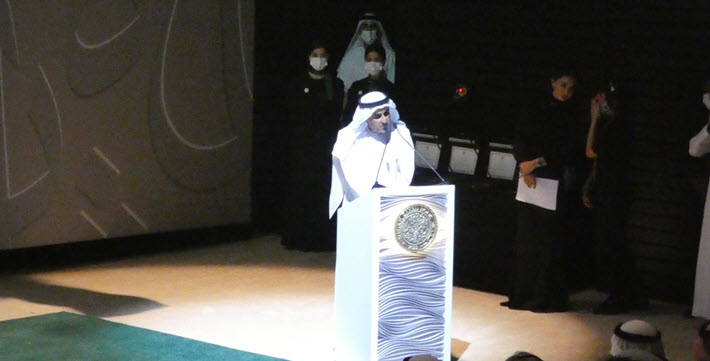 Writers from across the Arab world were celebrated for their “intellectual power” at the Sheikh Zayed Book Award’s 2022 ceremony in Abu Dhabi. 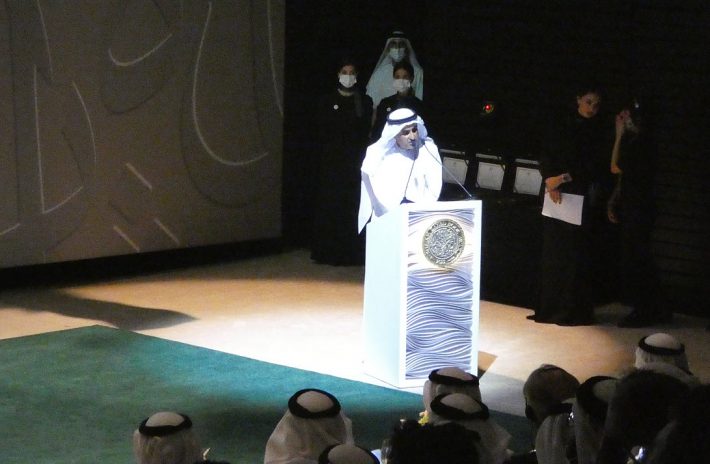 As Publishing Perspectives readers know, the Sheikh Zayed Book Award (SZBA) completed its 16th roster of laureates on Thursday (May 16) with the announcement that Abdullah Al-Ghathami is the winner this year of the program’s Cultural Personality of the Year honor.

And on Tuesday (May 24), the program held its customary ceremony to honor the winners, in the theater space at Louvre Abu Dhabi on Saadiyat Island.

The event is particularly impressive to see because the Sheikh Zayed Book Award—housed under the Abu Dhabi Arabic Language Centre (part of the emirate’s Department of Culture and Tourism) under the direction of Dr. Ali Bin Tamim is unafraid of some worthy pageantry.

This took on a dramatic resonance Tuesday because all stage personnel were rigorously masked in white to match each kandura and ghutra. We’ll embed the recording of the streamed event for you below, so you can look in on the ceremony if you like.

Held under the patronage of Sheikh Mohamed bin Zayed Al Nahyan, president of the United Arab Emirates, and Sheikh Saif bin Zayed Al Nahyan, deputy prime minister and minister of the interior, the program was joined by the Sheikha Bodour Al Qasimi of Sharjah, who is so familiar to our readers as president of the International Publishers Association in Geneva (IPA), the founding publisher of the Kalimat Group, the founding patron of the Emirates Publishers Association, and the driving force behind the newly announced Emirates Reprographic Rights Management Association.

As each of this year’s eight winners was called forward to receive her or his award, there was a quiet conversation onstage for a couple of minutes, representative of the “intellectual power” of these works that Bin Tamim referred to in his opening comments. 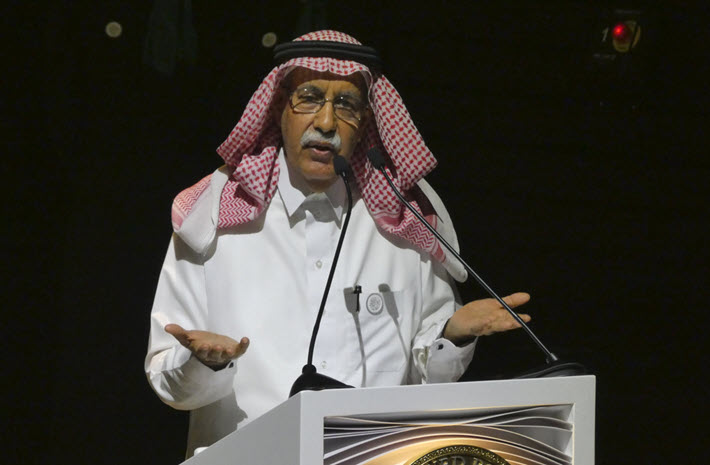 Abdullah Al-Ghathami speaks briefly on his receipt of the Cultural Personality of the Year honor at the 2022 Sheikh Zayed Book Awards program in Abu Dhabi, May 24. Image: Publishing Perspectives, Porter Anderson

The winner of the Cultural Personality of the Year: Abdullah Al-Ghathami honor receives 1 million UAE Dirhams (US$272,286) from a total 7-million-dirham purse (US$1.9 million)—the largesse of one of the world’s richest prize programs. All winners in the competition receive gold medals.

Abdullah Al-Ghathami, first teasing the audience about how lengthy his comments might be—in what seemed to be a Louvre Abu Dhabi theater without air conditioning—winked and pointed out that the real essence and ingenuity of the Sheikh Zayed Book Awards is their multiculturalism, which lies, of course, at the heart of the program’s efforts to bring forward the best in the highly diverse Arabic world of literature for the wider world publishing industry.

This is Publishing Perspectives’ 97th awards report published in the 99 days since our 2022 operations began on January 3.