Said to be stepping away from London Book Fair’s producer RX, Andy Ventris saw only one iteration of the fair under his management. 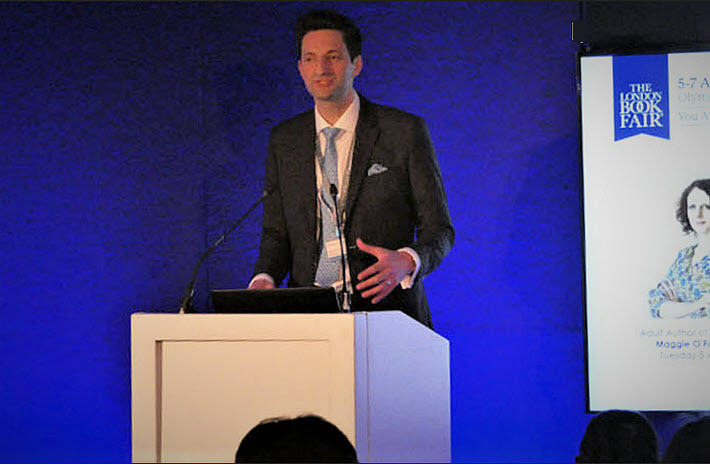 In an announcement catching many world publishing professionals by surprise today (May 18), The Bookseller in London has broken the news that Andy Ventris will leave the role of London Book Fair director.

His departure, expected in the summer, sees Ventris departing RX, the show’s producing company, less than two years after he had moved into the role, according to Mark Chandler’s report at The Bookseller.

Ventris had been in the luxury travel sector of marketing and events with Reed Exhibitions (RX)—and prior to that in sport and music events. In fact, in spring 2020, as the initial coronavirus COVID-19 outbreaks were hitting the United Kingdom, he was working on quickly canceling a show in Singapore as the initial assaults of the pathogen were landing hard in the Asian markets, and in London.

The 2022 edition of London Book Fair would turn out to be Ventris’ only iteration.

While little information is known about his departure at this point—The Bookseller report says he’s leaving RX, formerly Reed Exhibitions, to “take on a new challenge”—it also is unclear that there’s any connection between his coming departure and the instances of COVID-19 infections reported during and after the fair.

Lauren Brown wrote The Bookseller’s April 13 account of the multiple reports from book-business personnel of known cases during and following the fair and the company’s defense of its protocols, which included requiring confirmation of vaccination but the wearing of masks. London Book Fair, held April 5 to 7, coincided with the Boris Johnson’s abandonment of many virus spread-mitigation efforts, and masks were not voluntarily worn on the exhibition floor of the show.

Chandler at The Bookseller—the source also used by the Borsenblatt in Germany for its story—carries a statement from Ventris, in which he says, in part, “It was an incredibly proud achievement to see the halls of Olympia buzzing with people from across the publishing world, gathering again to do business, network and connect face to face, after such a long time apart.”

In our interview with Ventris ahead of the book-fair and trade-show season—which has featured notable collisions on the pandemic-era calendar. largely unavoidable—we pointed out that many publishing players had had no chance to meet the affable Ventris on whose shoulders the book fair’s complex conceptualization and planning rested.

Ventris made some good moves. For one thing, he cut the load of seminar programs by about half, coming in at more than 100 events, down from more than 200. That larger load (as at many trade shows and book fairs) had ended up primarily competing with each other and overwhelming some of the fair goers who would like to have seen more.

Ventris also utilized the Pillar Room at Olympia London—which is undergoing some redesign and refurbishment. The resulting “Main Stage” space in the Pillar Room was especially welcome because it’s an actual room with good soundproofing, solid doors, and book-fair personnel posted to close those doors and keep them closed between arrivals and departures. The Main Stage thus functioned as the quiet symposium space that such LBF venues as the Translation Centre and the English PEN stage will never be, exposed as they are to the crashing din of Olympia’s huge, barrel-ceilinged halls.

Throughout his own appearances in the directorial role of general host and welcoming personality, Ventris never seemed to overstep, coming across as a friendly, respectful coordinator who made no pretense of being an expert in the book publishing industry’s complexities.

Chandler at The Bookseller also has a quote from RX UK CGO (“chief growth officer”) Kerry Prince, who says, in part, “the wonderful response to this year’s show is not only testament to Andy and his team but also to the heritage and strength of the LBF brand. Our focus is now to continue to build on this year’s success for 2023 and beyond.”

As the London Book Fair site now confirms, the 2023 dates for the trade show are April 18 to 20, a merciful distance of some three weeks from the March 21 to 24 dates held now by Bologna Children’s Book Fair—offering the space between those major springtime trade shows that was impossible to have as pandemic-era schedules were upended.