Having been staged only once in its evolved form, Jerusalem’s International Book Forum is back in full production. 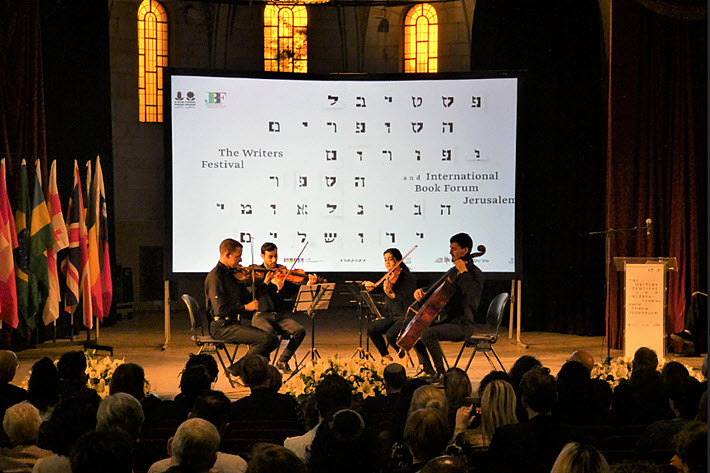 Onstage at the opening of the 2022 Jerusalem International Book Forum, the Finalé Quartet, before author Julian Barnes is confirmed winner of the Jerusalem Prize. Image: Publishing Perspectives, Porter Anderson

Three years after its inauguration in 2019, the  Jerusalem International Book Forum has convened this evening (May 15) at the city’s iconic 1933 International YMCA, its tower catching the slanting sunlight at the end of the day.

As speakers, members of this year’s Zev Birger Editorial Fellowship Program and alumni, and attendees of the aligned International Writers Festival gathered to see the ceremony, even the happiness of a crowd reunited for an in-person evocation of the conference paused to listen to the Finalé Quartet in a sunset rendition of Yosef Hadar’s Erev Shel Shoshanim (An Evening of Roses).

The evening, deftly hosted by Itamar Sharon, was held in three parts: The opening, built around the Jerusalem Prize, followed by a reception, and then an onstage conversation with the 2018 Nobel Prize in Literature laureate Olga Tokarczuk.

In the hands of the forum’s director Yoel Makov—along with production coordinator Sharon Katz, artistic director Hadar Makov-Hasson, and Ariel Municipal Company CEO Uri Menachem—it was clearly understood that this event has resonance beyond these few days in May. The forum, as Publishing Perspectives readers know, is devised as a biennial symposium for world publishing professionals, a format that has evolved from the original Jerusalem Book Fair. As such, the forum was the victim of one of many timing ironies of the still-ongoing pandemic.

Having held its first iteration in 2019 in its new framework—industry-facing rather than public-facing—it was effectively only a one-time program when the coronavirus COVID-19 struck, sending it to digital in 2021 before its return this year for what’s only its second outing in its new approach. 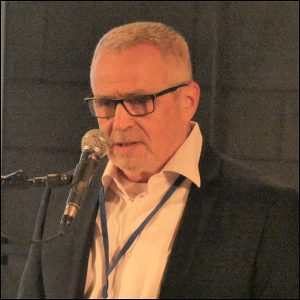 Introduced by Itamar Sharon, the first to speak tonight was Benjamin (Bini) Trivaks, chair of the Israeli Book Publishers Association, a man clearly in touch with the potentially precarious position in which the international publishing industry stands, with democracy, at a time when the freedom of expression, of publishing, is threatened.

He pointed out that in many nations, books have been set free of value added taxation (VAT). Publishing Perspectives readers know that this trend was accelerated near the end of last year, when ECOFIN, the European Union’s Economic Financial and Affairs Council, gave the EU member-states new flexibility to drop VAT levels on literature to 5 percent or even lower.

In Israel, Trivaks said, books are taxed at 17 percent based on a VAT law from 1976. That’s a rate now being applied to imported digital products, including books, according to local news reports.

“This has a direct effect,” Trivaks said, “on the ability of publishers to pay suitable compensation to authors, illustrators, and other professionals in the publishing business.”

In what Trivaks called “The Land of the People of the Book,” he thanked Jerusalem Mayor Moshe Lion for his support of publishing and the Jerusalem International Book Forum, and handed off to the affable Stefan von Holtzbrinck, CEO of Germany’s Holtzbrinck Publishing Group, which has sponsored the Zev Birger Editorial Fellowship program since its inception, to date supporting almost 600 fellows from some 40 nations.

Holtzbrinck: ‘Publishing Is About Solidarity’ 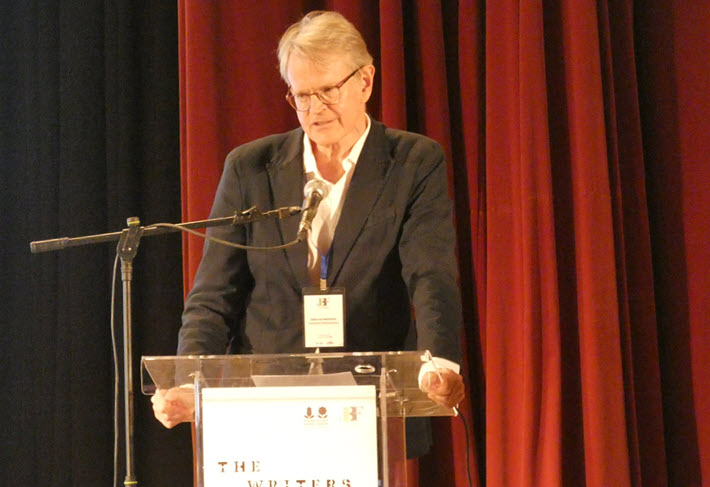 Von Holtzbrinck, pointing to this year’s cohort of Birger Fellows in the center of the YMCA’s theater, referred to them as publishing’s “youngest and brightest,” one of whom “will take my job in the next three or five or 10 years.”

He also teased with Mayor Lion about this year’s event being “a bargain,” suggesting that the delay by one year of the biennial Jerusalem International Book Forum means that the city has saved 50 percent on the cost of production and can now “spend 25 percent more on the next two” iterations.

But in a much darker vein, von Holtzbrinck pointed out that having originally visited the region in 1983 during the Lebanon war, today “I feel safer in Israel than in the center of Europe. And it’s also noticed that many people in Europe now understand much better what it means if you’re surrounded by enemies that deny your existence.

“We know in Germany,” he said to a hushed audience, “that a rocket with a deadly warhead can reach Berlin from Kaliningrad in two-and-a-half minutes.”

Looking at the geopolitical shifts in progress, he said that a state needs to be able “to stand up and defend your values and your system. And actually, publishing is about solidarity. It’s about solidarity with Israel, and that’s why we’re here for so many years, even when the times were tough and the situation was very complex and intellectually challenging. It’s about the struggle for peace.” 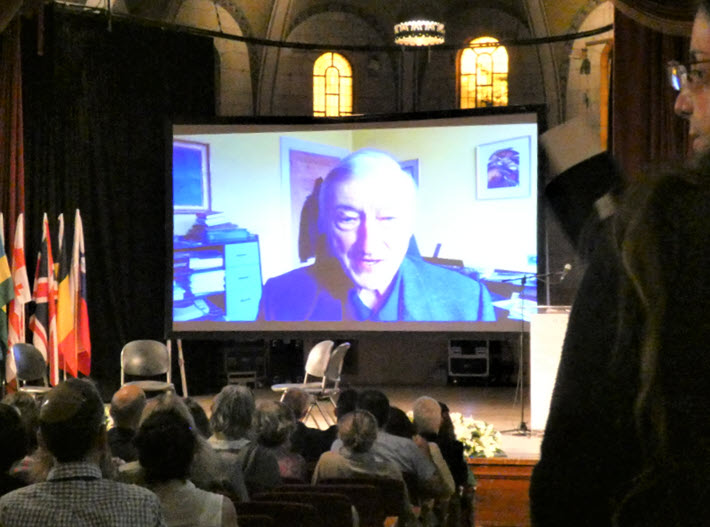 As it came time for the formal naming of the British author Julian Barnes as winner of what is, in fact, the 2021 iteration of the Jerusalem Prize—Joyce Carol Oates having won in 2019—Barnes had to speak in a recorded video message, unable to travel to Israel because of medical difficulties.

The award’s proclamation was accepted on Barnes’ behalf by Jonathan Shor, director of the British Council in Israel, and actor Udi Razzin gave a fine, understated reading of the acceptance speech that Barnes had written.

Barnes, in his text, worried aloud about “the regrettable tendency in Britain and other countries, especially in the United States, to wish to protect young readers and students from being shocked, hurt or even merely embarrassed by imaginative literature.”

The rising alarm about efforts from the political right to censor literature with attempts at book bannings, of course, is crossing borders, as are other signatures of authoritarian dynamics in many parts of the world.

“There must be trigger warnings given to the reader, in defiance of the phrase gives itself away,” Barnes said in his message read by Razzin.

“If I were a book editor,” and instructed now that by corporate policy, “that trigger warnings should be put onto every book, I should put exactly the same message on every book from Shakespeare and Cervantes and Dostoyevsky to Svetlana Alexievich and Ismail Kadare. ‘Warning: This book contains truth.'”

Tokarczuk: ‘We Are All Soldiers Now’ 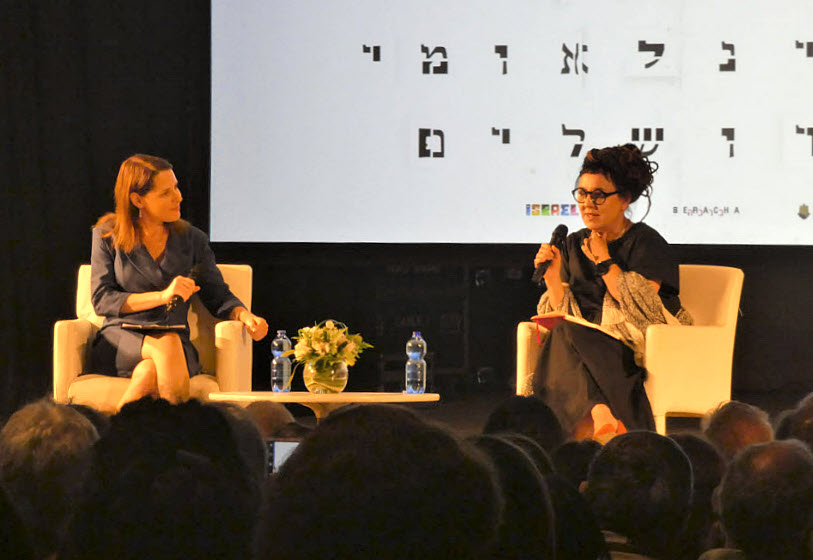 Relaxed and thoughtful, the Nobel laureate Olga Tokarczuk spoke for an hour after tonight’s reception, to a packed theater at the Jerusalem International YMCA, standing room only.

She is, as you’ll recall, up for another International Booker Prize, with the 2022 winner to be named on May 25. Her nomination this time is for The Books of Jacob (Fitzcarraldo Editions) in its translation by Jennifer Croft, with whom Tokarczuk was awarded the 2018 Booker International Prize for the English edition of Flights.

Holding her audience rapt for an hour, Tokarczuk used her impressive command of English to touch on personal elements of her life and to allude to much of her way of working, at times feeling all but chased by the demands of the characters in her work. She spoke of the complex position of her native Poland in her life and in The Books of Jacob, and of the influence on her work of her background in clinical psychology.

She was at her most arresting when she spoke about looking, as von Holtzbrinck had done, at the peculiar moment in history in which we all find ourselves, observing the “chronic” nature of warfare.

“Perhaps I’m naïve,” she said, “but I didn’t expect that such a thing” as the unprovoked assault on Ukraine by Putin’s Russia “could happen after the Second World War. In my naïve, childish way, I expected that war, if it would come, would be a different war, something which is going on in the Internet, hackers acting.

“But now we can see” in Russia’s relentless atrocities “that people are still killed in a very cruel way. And sometimes I also have the feeling that all of us are watching what’s going on, in Mariupol, as a reality show. There’s no way to react, feeling so defenseless, so powerless. There’s something immoral in it, it’s so present with the media and social media, and so far at the same time.”

Because the nightmare in Ukraine is so vastly displayed to the rest of the world, she said, responsibility also lies with the watching world.

“The writers,” Olga Tokarczuk said, “we are all soldiers now.” 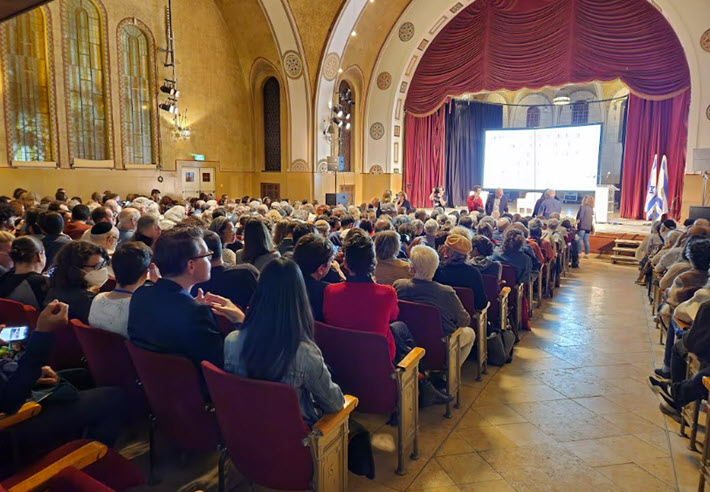 This is Publishing Perspectives’ 91st awards report published in the 95 days since our 2022 operations began on January 3.

More from Publishing Perspectives on the Jerusalem International Book Forum is here, more from us on international publishing conferences and events is here, and more on the Zev Birger Editorial Fellowship is here.