‘The biggest set of challenges our industry has faced in a generation’: Michael Pietsch and Maria A. Pallante lead the AAP’s annual meeting. 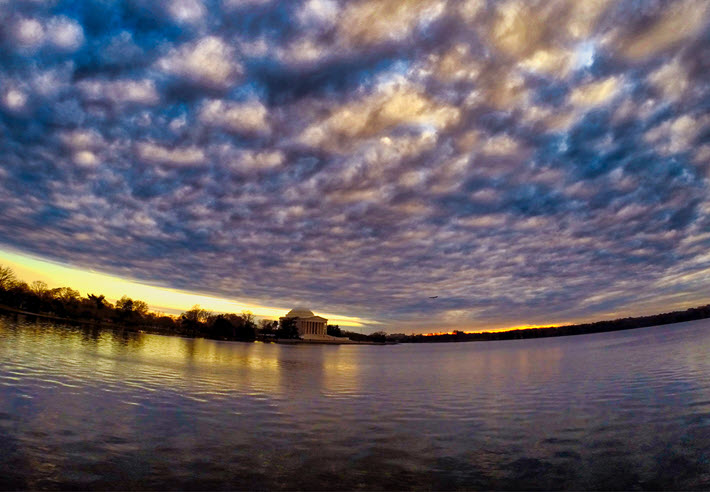 A view of the Jefferson Memorial from March 12 in Washington DC, where the Association of American Publishers is based. Image – Getty iStockphoto: Blightylad Infocus

Today’s (May 9) digital annual meeting of the Association of American Publishers (AAP) “would hardly be a meeting of publishers,” said AAP president and CEO Maria A. Pallante, “if we didn’t address the First Amendment.

“As we all know, across the country, thousands of books are being questioned with a scrutiny that’s newly chilling,” she said, “from novels to math books. This is not to say that parents and communities don’t have a say in public education, as the law is clear that they do. But that roll has constitutional limits. It does not extend to capricious actions that cross the line and amount to censorship. In fact, the line is important.”

Indeed it is. And the association shines most brightly when it operates with such outspoken clarity in public policy and political channels to protect and promote the place of the book industry and its freedom to publish.

“And so last month, in Missouri,” Pallante said, “we were proud to join with the booksellers, Authors Guild, and Comic Book Legal Defense Fund to file a brief in support of the NAACP—a case involving the removal of books from school libraries, including award-winning books addressing race and sexuality, such as The Bluest Eye by Toni Morrison.

“In our filing, we highlighted the constitutional rights of minors to receive intellectual information as well as the deep flaws in the school district’s assertion that the banned books were obscene and therefore removable.”

It will be necessary for publishing people to speak even more plainly and more often about suppression—that’s what this is—if it’s going to weather the kind of threat that PEN America in its “Banned in the USA” report has quantified as 1,586 decisions to ban books between  July 1, 2021 and March 31 of this year. 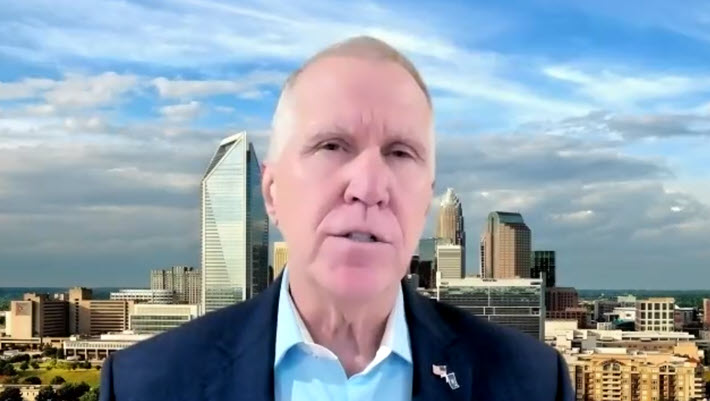 Citing Justice O’Connor’s assertion that the framers of the United States’ Constitution “intended copyright itself to be the engine of free expression,” Pallante flagged the association’s work in challenging big tech and dominant platforms. She pointed out that the AAP has been “assisting lawmakers with the American Innovation and Choice Online Act, legislation that—rather remarkably—could soon make it to a floor vote,” she said. “If enacted, it would begin to rein in actions such as self-preferencing, tying, and using non-public data to manipulate online sales, including for books.”

“Big Tech has long been involved in anti-copyright campaigns, sometimes directly but often through affiliation with mouthpiece organizations.”Maria A. Pallante, Association of American Publishers

She went on to talk about misinformation—which, of course, when deliberately deployed is disinformation—telling the meeting’s 1,200 online viewers, “Big Tech has long been involved in anti-copyright campaigns, sometimes directly but often through affiliation with mouthpiece organizations. Often, they seek to appropriate and monetize creative works for their own businesses, but may argue that such appropriation is innovation, that authors and publishers are greedy, or that the public interest is at stake.”

A part of the meeting honored Sen. Thom Tillis (R-North Carolina) with the AAP’s 2022 for being “a steadfast supporter of the copyright framework that is foundational to an informed and inspired society.”

Tillis appeared in the lineup to accept the award, saying, in part, “I’m proud to be an adamant champion for strong, reliable, and predictable intellectual property rights, especially when it comes to copyright and the publishing industry.”

Tillis also worked in a message no doubt gratifying to this big digital room of publishers: “Without copyright, I would never been able to enjoy the hundreds of books that I’ve read–and the two that I have in process right now.” 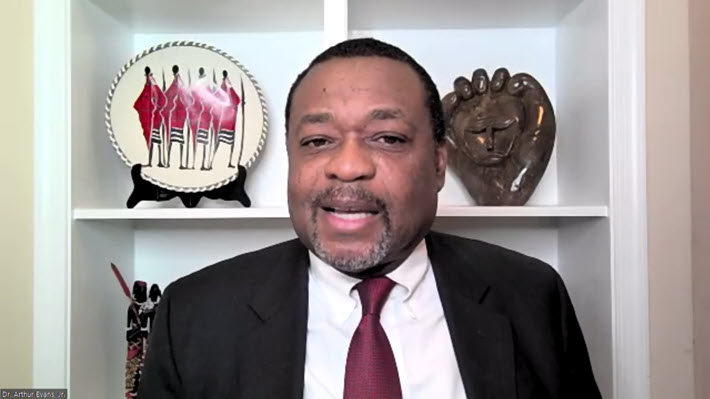 Annual meetings of this kind are hard to stage. There are many levels of organizational requirements that end up sitting rather uneasily next to those big issue-driven contextual frameworks that Pallante is adept at handling.

Here, for example, was the Guatemalan publisher Raúl Figueroa Sarti as part of the digital program, thanking the AAP for bestowing on his press, F&G Editores, its International Freedom to Publish Award, as we’d reported in November. The award is among the AAP’s most visible efforts in the international arena and appreciated as such annually.

But in terms of comparative gravitas, the parts of this sum might well have been divided into two meetings, maybe even three.

The roles of free expression and copyright vulnerabilities and unbalanced marketplace forces can be found on an urgent axis of immediate, virulent threats to democracy and to the ways in which they both pressure publishing and need its good energies. Association housekeeping notes and author visits about personal development and sisterly enthusiasm for an upcoming children’s book might right higher in the water if offered the grace of a different place and time.

On the important but non-urgent organizational front, Julia Reidhead, president of WW Norton and AAP vice-chair, duly announced five people elected to serve in at-large board seats for AAP through May 2025. That list comprises:

Speaking of the Psychological Association—which is a member organization of the Association of American Publishers—its CEO, Arthur C. Evans Jr., was on hand to talk about publishing’s potential to help narrow disparities in social justice and other arenas of inequality. This, of course, lies closer to the realm of mission-and-crisis concerns.

Pietsch: ‘There Are Fires Raging in Our Industry’ 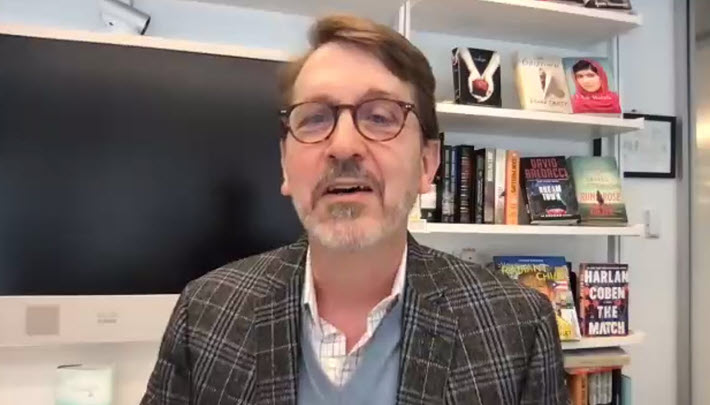 And Michael Pietsche, Hachette Book Group CEO and the current board president for the AAP, brought a disarmingly soft touch to his own ability to sort through the afternoon’s offerings and present a serious look at the kind of engagement needed.

“In the AAP, we have a common home and a knowledgeable advocate that speaks for all of us, for all sectors of publishing in regulatory meetings, in legislative bodies, and as necessary, in court.”Michael Pietsch, Hachette Book Group

“There are fires raging in our industry, and in the world at large,” he said. “We’re confronting many serious issues, what I would say is the biggest set of simultaneous challenges our industry has faced in a generation.”

He listed them: “Not just a global virus but also sensational and outrageous book bans, an unprovoked war in Ukraine, unprecedented supply chain disruptions, a persistent shortfall in diversity in our offices and publishing programs, climate challenges, and unrelenting efforts to weaken the copyright framework that has protected and promoted publishing since the earliest days of the nation.

“We all have to manage these issues in our individual businesses,” Pietsch said. “But in the AAP, we have a common home and a knowledgeable advocate that speaks for all of us, for all sectors of publishing in regulatory meetings, in legislative bodies, and as necessary, in court.”

Pietsch called the Association of American Publishers, “a place that helps us fight these fires, together,” generously commending Pallante’s leadership.  They were joined on the meeting’s busy agenda by guest speaker Anne Applebaum, the author and intellectual you may know best for her essays and analysis at The Atlantic.

You can read our sidebar on her comments here.

More from Publishing Perspectives on the Association of American Publishers is here. More from us on the freedom of expression and freedom to publish is here, more on copyright and its issues is here, more on book bannings is here, and more on the United States market is here.