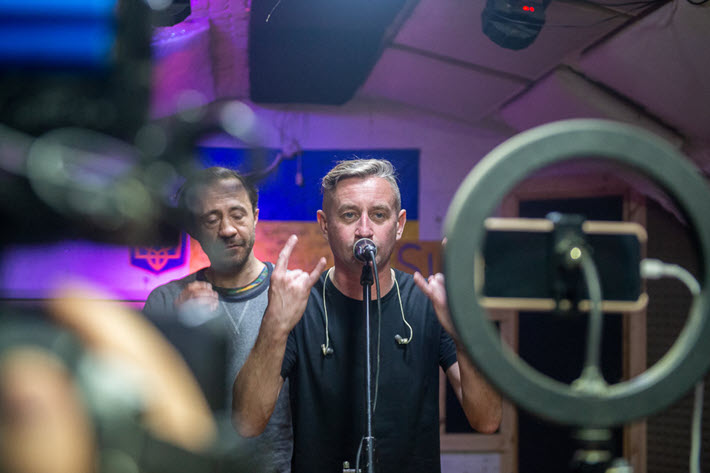 Translator and writer Serhiy Zhadan at the bomb-shelter release on April 16 in Kharkiv of Vivat Publishing’s Ukrainian edition of ‘Go the F*ck to Sleep.’ Image: Vivat Publishing, Serhiy Bobok

Vivat Made ’10 Percent of Planned Profits’ in March

Our readers will remember our March 1 interview with Julia Orlova, the CEO of Vivat Publishing in Kharkiv. Even then, that Ukrainian city, close to the Belarusian border, had quickly become one of the most punishingly targeted by Vladimir Putin’s forces. That hasn’t changed.

As Tim Carman reports today (April 18) for the Washington Post, a missile on Saturday once again demonstrated the Russians’ interest in hitting civilian targets, as it took out “a restaurant operating as a relief kitchen with support from World Central Kitchen, the organization founded by chef and humanitarian José Andrés.” Four staffers were hospitalized in that attack.

Today, The New York Times‘ Thomas Gibbons-Neff and Natalia Yermak write, “An artillery strike killed at least one person and wounded another in a residential area in southeastern Kharkiv.’ This, after Gibbons-Neff reported on Sunday that rockets had lit apartment buildings and a market on fire, with police reporting at least five people killed, 13 injured.

These assaults make it all the more remarkable that Vivat has not only released a newly translated title, but has held a launch event for it—in a bomb shelter on Saturday (April 16) at 5 p.m. Kyiv time (GMT-3). The publishing house would like to have staged the event later in the evening, but curfews required the early evening timing.

Serhiy Zhadan is a translator, novelist, and essayist who won the Jan Michalski Prize for Literature in 2010 for his novel Voroshilovgrad. Zhadan is an activist in Ukrainian nationalism, a part of the Red Thistle literary group, and co-founder of a foundation created to provide humanitarian to Ukrainians in the Donbas. He has at least a dozen books of poetry out, and has translated poetry from German, English, Belarusian, and Russian. 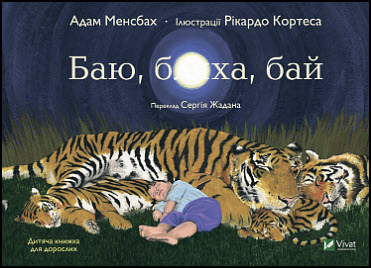 It’s the American writer Adam Mansbach’s 2011 Go the F*ck to Sleep (Akashic Books) that Zhadan has translated for Vivat’s release. The book, with illustrations by Ricardo Cortés and Owen Brozman, is the first of Mansbach’s trilogy of “bedtime books for parents who live in the real world.” It’s a part of an informal subgenre of such comedic, irreverent literature that signals a satiric take on family issues with F-bomb titles, such as the contemporaneous Sh*t My Dad Says books by Justin Halpern from HarperCollins.

Publishing Perspectives has been able today to ask Orlova’s Vivat Publishing team about the arrival of the new translation into Ukrainian, by way of catching up on how the press is handling the deepening crisis of Putin’s unprovoked aggression against Ukraine.

When we ask how the company is functioning under the circumstances, the chief communications officer, Galina Padalko, says, “Most of the workers left Kharkiv, but a few people have remained in the city under shelling. One of our colleagues lived in the metro for a month and continued to make books there until her house was bombed and she evacuated.

“It’s sad to talk about it, but some of our colleagues will have nowhere to return to in Kharkiv. They no longer have a home.

“Staying in Kharkiv is not safe, but those who made such a decision have grave reasons. Because of the constant shelling of the city, we have five to 10 dead and dozens wounded every day” in Kharkiv, the Ukraine’s second-largest. “The Russians are shelling the city’s outskirts with artillery, and all other areas with long-range missiles or air bombs. We’ve even learned to distinguish between these types of weapons by their sounds.

“You never know where you’re going to run to at any given moment.”

At Least 50 Books Laid Out and Ready 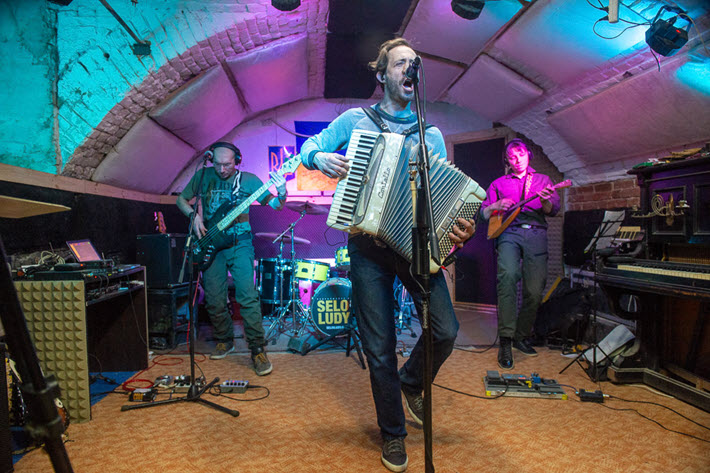 Music from the band Selo i Liudy at the bomb-shelter release in Kharkiv of Vivat Publishing’s Ukrainian edition of ‘Go the F*ck to Sleep.’ Image: Vivat Publishing, Serhiy Bobok

“The book was translated by Serhiy Zhadan in Kharkiv, typeset by my colleagues in western Ukraine, and finally, the book and song were presented in the Kharkiv bomb shelter.” 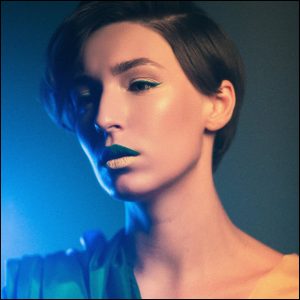 The song she refers to is based on the book’s text and was performed by Zhadan with the ensemble Selo i Liudy at the book launch.

Vivat’s choice of Go the F*ck to Sleep, Padalko says, is “a game of normality. We want our children to fall asleep again, not to be agitated because we have constant sirens, shelling, and airstrikes. We do want this normality.

“This presentation was an act of sarcasm and self-irony, but we need to continue life and develop culture because we’ll soon win and restore our country. And how can it manage without culture?”

Vivat is still working on getting Баю, бляха, бай printed, Padalko says, and thus hasn’t opened presales yet. “On the book’s page, you can click the ‘report availability’ button,” she says. “Also, there’s information on how to support our children’s writer, who’s at war. The account is to support him.”

Those who would like to buy copies of the new book for refugees—”little Ukrainians in other countries, who are now forced to leave their home because of the war,” as she describes them—can contact her at g.padalko@vivat.factor.ua.

‘Under Fire in Kharkiv’ 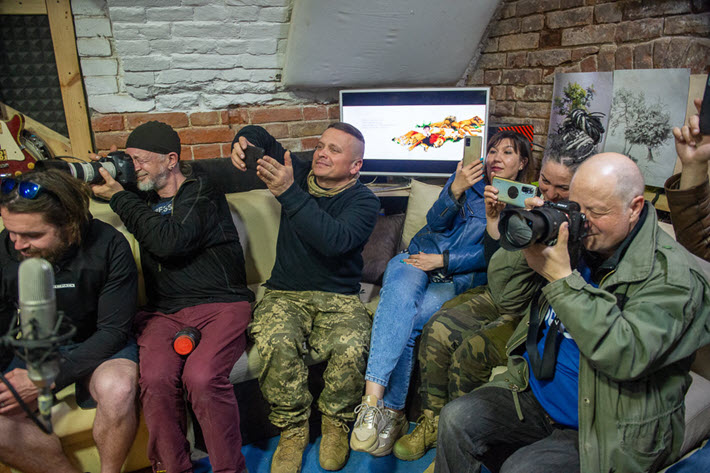 Vivat’s buy of Mansbach’s translation rights in Ukrainian, she says, is limited to just the first volume at the moment, “to see if the public will welcome this type of book. We were warned that the book would not gain wide popularity because of part of the population’s conservatism and resistance to swearing.”

“Now we’re looking for small printing houses in Kyiv, in western Ukraine, and abroad, but the cost of printing them is many times more expensive.”Galina Padalko, Vivat Publishing

But Padalko reminds us, “The severe and first national step toward adopting” such abusive language “was ‘Russian warship, go f*ck yourself,'” radioed by Snake Island’s Ukrainian Territorial Defense personnel to the Moskva—the Russian flagship missile cruiser that on Thursday (April 14) sank in the Black Sea.

After the Snake Island incident, Padalko says, “Our people relaxed a little” in relation to salty language. Generally, though, “Compared to Russian obscenities present in everyday communication,” she says, “Ukrainian is relatively intelligent and has soft words. We have many playfully affectionate words in the Ukrainian language to express anger and other emotions. It’s these words that Serhiy Zhadan uses in his translation of the book.”

Simply handling the work, she says, has been challenging, “although we continued to work from the first day of a full-scale war. Most of our colleagues left and did not take their laptops, packing up in a hurry. Some had to send laptops or computers after them. Then it was necessary to resume the work of servers and remote access for everyone. Now all departments of the publishing house are working to some extent, although in March we received only 10 percent of planned profits.”

The inventory, “The books, have had to be evacuated, as well,” Padalko says, “a very complicated and dangerous process.”

Because of shelling, the house has been limited in how many pallets it can safely move. One storage center was burned, Padalko says, in an attack. “Fortunately, there were no people or books inside it. However, now we have evacuated some of the books to a warehouse in western Ukraine and will soon be able to resume work on the distribution of books for partners and sales through our online store.”

“We want our children to fall asleep again, not to be agitated because we have constant sirens, shelling, and airstrikes.”Galina Padalko, Vivat Publishing

Padalko says that Vivat has at least 50 books laid out already. “And we don’t stop making them,” she says. “To the extent that our most extensive printing facilities remain under fire in Kharkiv, we don’t have the opportunity to print books there. Now we’re looking for small printing houses in Kyiv, in western Ukraine, and abroad, but the cost of printing them is many times more expensive for several reasons.

“Of course, this will affect the cost of a book,” Galina Padalko says. “This is very bad in a market with a highly price-sensitive reader to begin with.

“But after we win,” she says, “we really expect a renaissance of Ukrainian books.”