The Spanish-language collective delegation to London Book Fair cites 30.10 million copies to Europe among its exports. 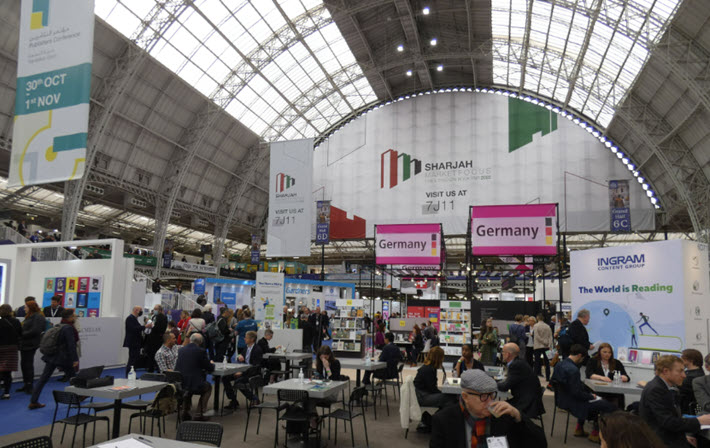 ‘The International Projection of Spanish Authors’

After the crush of news that for weeks has preceded and followed the closely staged Bologna Children’s Book Fair, London Book Fair, and the Caucasus and Black Sea Basin Countries’ Regional Publishing Conference in Tbilisi, there are many things we want to return to—or address for the first time, having been unable to report on them during such a dense news environment.

The Spanish book sector, for example, ahead of its Guest of Honor Spain turn at Frankfurter Buchmesse (October 19 to 23), produced a brace of analytical figures well worth retrieving.

Working here in a quick bulleted format to get in several of the insights from a the Federación de Gremios Editores de España—FGEE, the Federation of Publishing Guilds in Spain, then:

“The London publishing meeting,” the federation writes,  is a new opportunity for publishers, agents, booksellers, librarians, authors, and suppliers to assess the state of the European publishing sector and explore new options for the export of Spanish books in a framework as important as the English-language market.”

The United Kingdom and United States

markets account for a third of the world’s publishing output, according to the statement, and that means that “being published in English increases the possibilities of international projection of Spanish authors.”

The catalogue this year has included, for example, the “Catalan Culture Spotlight” touring program, which strengthens the relationship between Catalan and Anglo-Saxon publishing professionals, with the aim of continuing to increase the number of translations of Catalan literature into English.

In addition, Acción Cultural (AC/E) reserved a space at the fair to provide information on translation grants under the title “Translating Spanish Literature: Incentives and New Grant Opportunities.” This program aims to help translate Spanish authors into English, German, Italian and Dutch.

According to the Book Foreign Trade Report 2020, Spanish publishers exported books and booklets to the European continent totally 30.10 million copies.

The most exported book subjects to the United Kingdom were:

“It should be noted that 83 percent of the social sciences books exported are Spanish-language educational books.

“In Spain, the publishing industry annually moves more than €4 billion, and employs, directly and indirectly, more than 30,000 people.

“The 800 publishing companies grouped in the federation represent about 97 percent of the sector’s turnover. Throughout 2020, these companies published more than 181 million copies and more than 73,000 titles in paper and digital formats.”

More from Publishing Perspectives on the Spanish market is here. More on rights is here, more on Bologna Children’s Book Fair is here, and more on younger readers’ literature is here.