The winners of the Sheikh Zayed Book Award will be honored in May at a ceremony parallel to the Abu Dhabi International Book Fair. 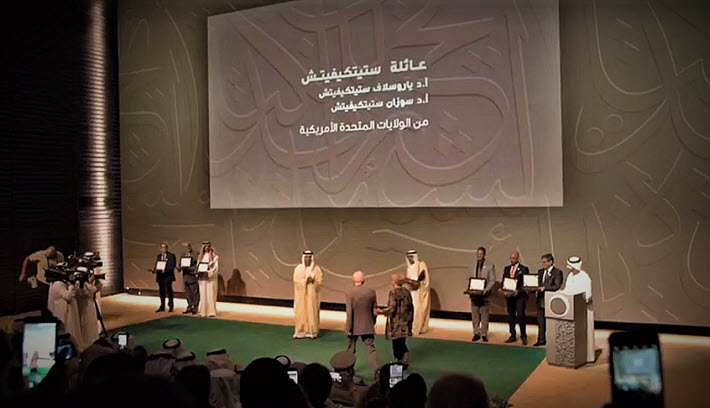 The late Prof. Jaroslav Stetkevych and his wife Prof. Suzanne Stetkevych cross the stage during the 2019 Sheikh Zayed Book Awards ceremony in Abu Dhabi to accept their joint award as Cultural Personalities of the Year. Jaroslav Stetkovych died in 2021 at Georgetown University Hospital at age 92. He was born in 1929 in Burkaniv, Ukraine. Image: SZBA

The board of trustees governing the Sheikh Zayed Book Award has concluded its review of the nominees put forward by the program’s Scientific Committee for the 16th edition of the accolades.

This point in the lengthy and layered process of selection of the Sheikh Zayed laureates has resulted in the board’s endorsement of the entire nine-category slate of winners.

The meeting was attended by the Sheikh Sultan bin Tahnoon Al Nahyan, chairman of the board of trustees, and by Zaki Nusseibeh, cultural adviser to president of the United Arab Emirates.

Board members who were present comprised:

We can expect the winners to be announced near the end of this month, with the award ceremony taking place in May in parallel to the Abu Dhabi International Book Fair.

At that ceremony, all the winners are to be honored in a digital ceremony in May, when the Cultural Personality of the Year—still to be formally named—will be presented with a gold medal, a certificate of merit, and a cash award of 1 million UAE dirhams (US$272,242). A purse of 750,000 UAE dirhams (US$204,181) is provided for each of the eight book categories.

Overall, the Sheikh Zayed Book Award is among the wealthiest portfolios of publishing-related honors in the world, worth a total of 7 million dirhams (US$1.96 million).

Another Record Year in Submissions

As Publishing Perspectives readers know, the program has surpassed its former records this year for entries with more than 3,000 applications from 55 countries, including 20 Arab nations.

That represents a 28-percent over last year, when a total of 2,349 applications were received.

This year, a total 26 submissions made it onto the shortlists announced by the Sheikh Zayed Book Award last month.

The board of trustees is the body tasked with setting the general policies and organizational structure of the Sheikh Zayed Book Award, overseeing all the award’s activities and devising policies that help achieve its objectives. It’s also in charge of making decisions concerning the award categories and/or winners.

The Abu Dhabi Arabic Language Centre was established following a directive from Sheikh Khalifa bin Zayed Al Nahyan, president the United Arab Emirates and ruler of Abu Dhabi, as part of the Department of Culture and Tourism at Abu Dhabi.

The centre works to realize its foundational vision through dedicated programs, human expertise, and meaningful partnerships with the world’s most prestigious technical, cultural, and academic institutions.

The #SheikhZayedBookAward Board of Trustees has approved the list of winners, endorsed by the scientific committee across all categories of the Award’s 16th Edition.

This is Publishing Perspectives’ 80th awards-related report produced in the 82 publication days since our 2022 operations began on January 3.