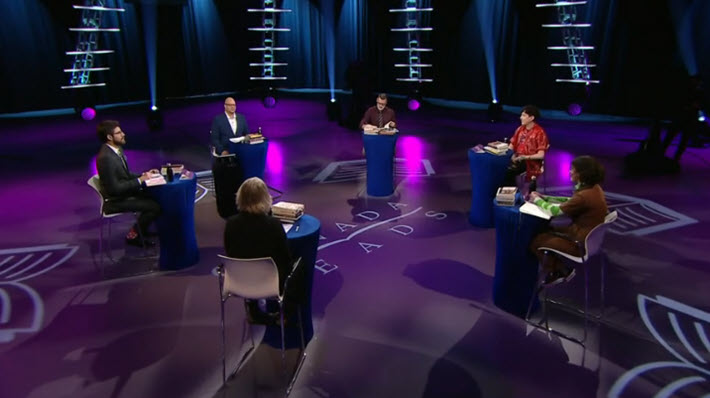 The ‘Canada Reads’ set before airtime on Day Three of the 2022 competition. Image: CBCBooks

‘It’s About Us Coming Together’

While many publishing-industry North Americans were in Europe for that too-short week in late March between Bologna Children’s Book Fair and London Book Fair, the CBC program Canada Reads played through with its annual emphasis on serious literature treated with unapologetic commitment and verve.

As Publishing Perspectives readers know, Canada Reads is a series of issue-driven debates in which:

Since you, too, may have been in rapid-trade-show turnaround (or simply too jet-lagged to find your TV remote) between those too-close trade shows last month, we’re embedding below the final day’s debate, Day Four, which opens with a recap of the three books eliminated on the first three days of the series–each thrown off this island of collegial literary argument for reasons you can test against your own opinions.

To reset this year’s competition in your mind, we’ll list here the five books selected for the fray this year. 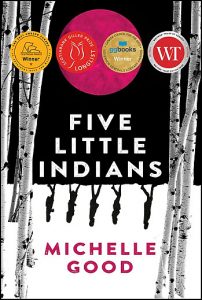 While our usual practice is to link a book’s title to its publisher page (not to a retailer), in this case our title links go to CBCBooks’ preparatory material for Canada Reads, so our readership of industry professionals can see how the show positions its content. It gives you a sense for how CBCBooks’ team sorts out a basket of contenders that can reflect a nation’s contemporary concerns:

As you can see, four of the five books are from Big Five houses’ Canadian installations, two each from Penguin Random House Canada and HarperCollins Canada. One is from Arsenal Pulp Press, a Vancouver-based independent house.

And the winner was author Michelle Good’s Five Little Indians (now we’re linking to its page at HarperCollins Canada).  If you look at Harper’s display of the cover–we’re using it above–you can see that Good’s work had arrived at Canada Reads as a much-decorated novel. Among its accolades prior to the show:

None of these books is a slouch. Journalist Omar El Akkad’s What Strange Paradise, for example, was in contention this time, and had won the Scotiabank Giller Prize for which Good’s Five Little Indians was a finalist. It also was shortlisted for the Aspen Words Literary Prize in the States, another awards program with a welcome, deliberate intent. 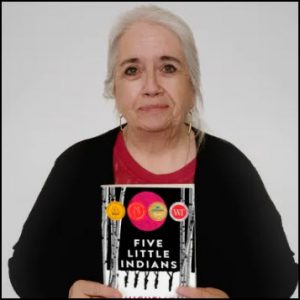 What put Good’s Five Little Indians over the top is Good’s story of five survivors of Canada’s “residential school” atrocities, a nightmarish fact of the nation’s history that has seized the population in the last year with grief, remorse, and at times stark disbelief. Forcibly removed from their own cultures and placed in these boarding schools run by Christian churches, more than 150,000 Indigenous children were sent to these schools.

The discoveries of thousands of unmarked graves on former campuses last year finally began confirming the worst. And five years earlier, the Truth and Reconciliation Commission’s research had described this effort at assimilation as a form of cultural genocide.

The Canada Reads advocate for Five Little Indians was Christian Allaire, himself an Ojibway writer from the Nipissing First Nation. A style writer for Vogue who champions diversity in fashion, he proudly plundered his wardrobe all week to make that colorful point with gifted Indigenous designers. There’s a story from CBC about this, in fact, and you can read it here.

Allaire used the experience of his own family–a grandmother in particular who survived the residential schools as a child–to drive home the book’s handling of the lasting scars of Canada’s efforts to compel assimilation by Indigenous children.

“Being citizen[s] of this country,” Allaire said during his arguments for Good’s book, “we do have a duty to do these reparations, even if you didn’t have a hand in it. I know a lot of people don’t want to assume the guilt. It’s not about that. It’s about us coming together as a country to acknowledge this happened and helping us move forward all together.”

This is literature in action, literature put to the test of its cultural value.

If there’s any drawback at all to Canada Reads—the unapologetic seriousness of which is its glory—it may be that the dynamics of the competition and its outcome tend to be credited to the books’ high-profile defenders more than to their authors.

This is understandable to a degree because, of course, it’s the popular personalities championing the books that draw the audience and drive the book sales.

However, this was the first year in our experience that this (mild) adoration-of-the-advocates energy seemed to be more prominent. We might recommend that you take 17 minutes to watch Allaire speak with Good—”his” author with her Canada Reads champion—in a video produced by CBC that does bring the author and her thoughts into gracious, sharp focus. Here it is:

So grounding is it to hear Michelle Good talk about her nine-year process with the book that the production team at CBC may want to consider building some component of this—some presence for each year’s authors—into the show itself.

Another worthy example of the value here is found in advocate Tareq Hadhad’s conversation with El Akkad, who talks about working in news for the Globe & Mail in Cairo in 2012 as many Syrians fled to Egypt. “Our Syrian brothers and sisters,” as politicians would say, El Akkad recalls, was a phrase directly in opposition to the realities of how many refugees were exploited. And it’s interesting to hear the author ask Hadhad what his biggest shock was when he first arrived, himself, in Canada.

El Akkad also remembers once being asked by a Louisianan in the United States where he was from, and then claimed he could “hear the Egyptian” in El Akkad’s accent. “I said, ‘No, you can’t,'” El Akkad says laughing.

It’s difficult to ask more of Canada Reads, in a way, even to offer more presence or awareness of the authors. Despite its showy edge–always well produced–and many awfully cute PR shots of advocates posing with “their” books, when the time comes for those advocates to talk about the books, the show goes so far beyond the usual sentimentalized books-to-curl-up-with claptrap of many awards regimes that it stands as a worthwhile exercise in critical thinking.

If this show is any indication, when Canada reads, it’s got its collective brain in gear. We could use so much more of that these days.

This is Publishing Perspectives’ 82nd awards-related report produced in the 83 publication days since our 2022 operations began on January 3.