With 75 first-time exhibitors and 400 speakers in the show’s programming, London Book Fair is up and running. 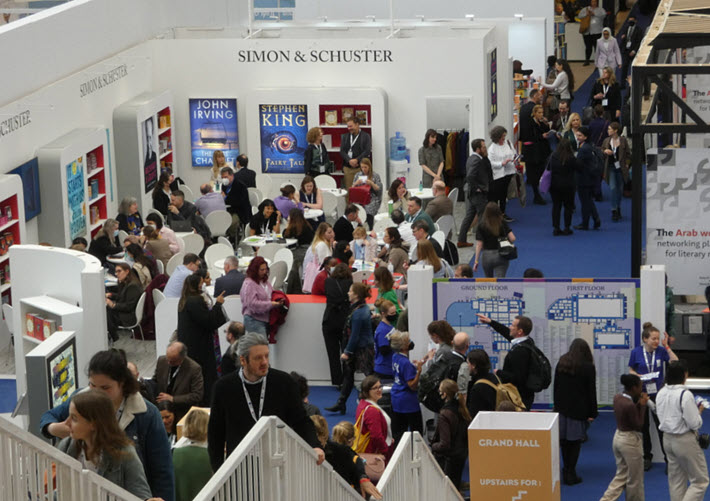 Join us at 10 a.m. BST at the Main Stage (Pillar Hall) for a conversation on ‘The Future of Book Supply.’ The discussion will feature Sharjah Book Authority chair Ahmed Al Ameri and Ingram Content Group’s UK senior vice president David Taylor on the new development and potential in the Middle Eastern and North African markets for international pubishing at Sharjah Publishing City and Lightning Source Sharjah.

Ventris: ‘We Can Call This Year the 50th’

With figures that may surprise some world publishing professionals, Andy Ventris, the director of London Book Fair, has opened the trade show today (April 5) with what he says are more than 500 non-UK international exhibitors.

That’s nothing against the home team, of course, and the United Kingdom is handsomely represented with close to 1,000 exhibitors, 983 of them broken down this way:

And Ventris was forthright and straightforward, noting for many who hadn’t met him, “I’ve been director of LBF since autumn 2020. And this is my first year. So for me, personally, this is a really great experience to be able to stand up and welcome you all. Welcome, everyone, to London Book Fair this year.

‘Last year, in fact, would have been LBF’s 50th anniversary, and we’re really looking forward to celebrating. We can call this year the 5oth, if we’d like.”

Later in the morning, also on the new Main Stage in Pillar Hall, Nosy Crow publisher Kate Wilson would talk about one sensation of being at London Book Fair as akin to Washington Irving’s “Rip Van Winkle”: It could have felt to some that they went to sleep after the direction of Jacks Thomas in 2019, only to awaken now and find Ventris at the helm, a smaller exhibition floor area (by about 20 percent, because of Olympia London’s ongoing renovations), and an International Rights Center fully in view and set on ground level in the Grand Hall.

Nevertheless, foot traffic on opening day was brisk. There were some good-natured complaints about long waits as COVID-19 vaccination status credentials were checked at the door. The way into the building did lead to a much more comfortable and spacious entry salon than in the past.

By midday today, parts of the show floor were displaying the bottleneck properties that those of us who regularly are at London Book Fair remember from the past. It should be interesting to learn how the week’s attendance goes.

“There are 75 first-time exhibitors,” Ventris said, “with some 400 speakers, excluding myself, contributing to the London Book Fair seminar program across 125 or so” events.

Of the Main Stage program, Ventris said, “This stage will be packed with thought leaders, publishing personalities, industry movers and shakers.”

And despite the fact that the show this year has returned with a smaller footprint that before—the result of Olympia’s ongoing renovations—”We’ve taken the learnings from not being able to run physical events the last couple of years,” Ventris said.

“We’ve created a digital platform online platform,” Ventris said, which all of you can access right up until the end of April.

“So you’ll get log-in details for that and you’ll be able to go back and watch any of the sessions that are being recorded. So you can watch and catch up or or go back and rewatch a famous session. As well as this, we have our event app, which you can get by just searching LBF within the various Apple stores and Play stores and this has a full schedule of events.” 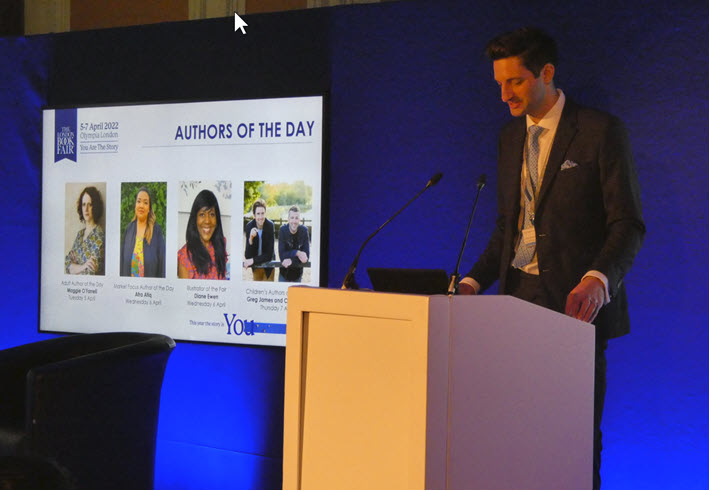 Because of the Olympia’s redevelopment operations, Ventris said, “We’ve had to make some decisions in terms of where we locate theaters and what theaters are available.

“So we do still have seven theaters at the fair this year,” he said. “We’ve got plenty to keep everyone busy and these are the theaters that you’ll see on the floor. There’s really something for everyone across these theaters.

“In fact,” Ventris said with a smile, “you could do far worse than just stay in your seat for the next three days” at the Main Stage program in Pillar Hall, “and you’d learn a huge amount and I’m sure have a great time.”

While many of the specific offerings of the show mentioned by Ventris have been dealt with in these pages already, he added, “The Ukrainian Book Institute will be exhibiting at London Book Fair. And we’re really pleased that they are. We’ve offered a stand to them and we’ve helped design and build it, and we hope that you’ll pop by and show your support as we are for the Ukrainian book Institute.

“We’ve also given permission to the [office of the] UN High Commissioner on Refugees to fund-raise on-site for refugees from global conflict in Ukraine and around the rest of the world. So you might see them on arrival.”

And with that, a small press corps had heard a big round of messaging from a publishing trade-show director long delayed in staging his first effort, even as his new berth passed its 50th anniversary all but unobserved.

Understated, warmly welcoming, and modest despite the fact that a clearly viable London Book Fair is in sway under his direction, Andy Ventris calmly opened a show with a notably relaxed rhythm and bearing by comparison, say, to the almost euph0ric energies of the recent Bologna Children’s Book Fair.

Many of the stands at London this year look lighter-weight than usual, the aisles feel a bit narrow, and the spatial constraints seem to make it tricky to interpret where you are, if you’re still remembering some of those past years’ floorplans. But to a person, everyone seems glad to be back, quickly getting a handle on the new space, and looking for the business opportunities that have been hard to come by in the long wait since 2019. 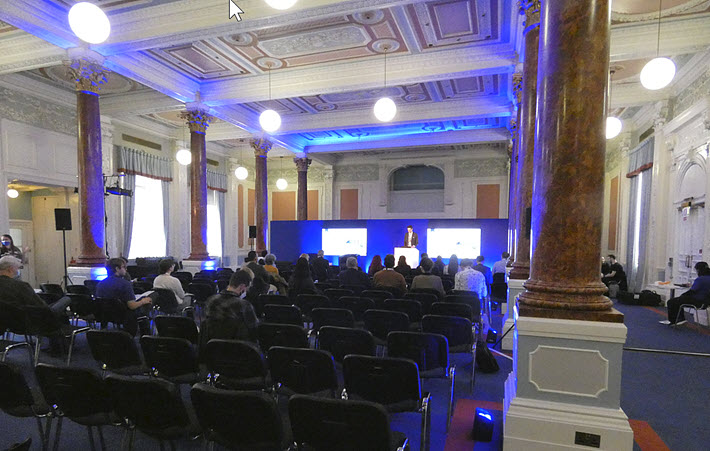 More from Publishing Perspectives on London Book Fair is here, and more on book-business trade shows and book fairs is here.