A seven-year member of parliament, the minister of London Paul Scully, tours LBF, the guest of the Publishers Association. 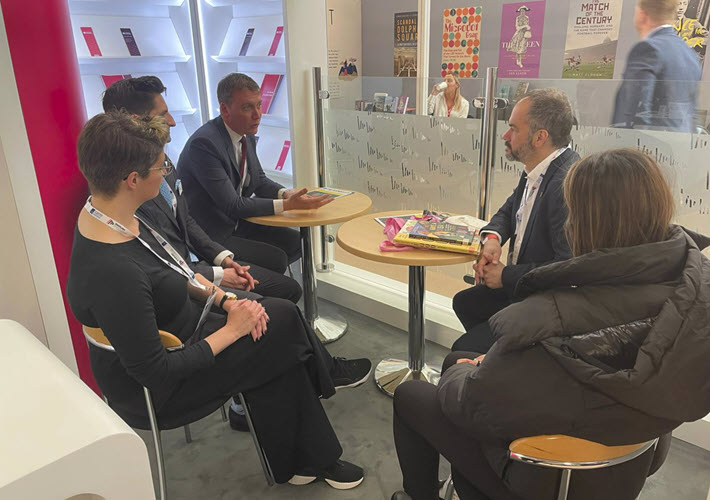 Lotinga: Publishing’s Role in the UK ‘Leveling Up’ Agenda

Minister for London Paul Scully has visited the first fully physical iteration of London Book Fair in three years, at the invitation of the Publishers Association, which has its stand at the trade show this week at 6G51.

Stephen Lotinga, the association’s CEO, in working to leverage the Publishers Association’s lobbying efforts on behalf of the British book business, gave Scully a tour of the exhibition floor and introduced him to several of the United Kingdom’s publishers.

The intent, of course, was a chance to stress to Scully, as the association’s read-out puts it, “the contribution that publishing makes to the UK’s economy, the importance of exporting to the industry, and the growth of English-language books” in many parts of the world.

The association’s representatives, Publishing Perspectives is told, discussed with Scully how significant book publishing is to the Boris Johnson government’s “leveling up agenda,” which is asserted to be a way to narrow gaps between richer and poorer parts of the United Kingdom.

Michael Gove, named the “leveling up secretary,” has said that the policy will take until 2030, with focal elements on education, broadband, and transportation.

In Lotinga’s conversation with Scully, he pointed out research indicating that reading for pleasure is “the single biggest indicator of a child’s future success.” Lotinga, according to the association, also pointed out to Scully that that book buyers are still required to pay VAT on audiobooks—unlike ebooks and print books.

“Lotinga asked that the government correct this anomaly at the earliest opportunity,” according to an association report.

The government’s leveling p scheme was introduced in early February.

Paul Scully—whose office has been adamantly supportive of Ukraine under the unprovoked aggression of Russia’s Vladimir Putin—is the Conservative Party member of parliament for Sutton and Cheam, and has been an MP since May 2015. He holds the UK government posts of parliamentary under-secretary (the Department for Business, Energy, and Industrial Strategy), and minister of state for the British capital. 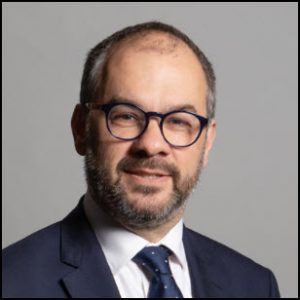 Scully, while at the Olympia London venue, met with Kate Manning, marketing director of Magic Cat Publishing, and with Andy Ventris, director of the trade show.

He also met with David Shelley, the Hachette UK CEO who is also president of the Publishers Association currently, and with Perminder Mann, CEO of Bonnier Books K, and chair of the Consumer Publishers Council at the association.

Before leaving Olympia London, Paul Scully also toured the Market Focus Sharjah stand on the ground floor, which on Tuesday at 2 p.m. had its own formal opening with the iconic Sharjan stick dancers and drummers who also accompanied the United Arab Emirates’ Sharjah program to the Bologna Children’s Book Fair for the emirate’s guest of honor program in Italy.

More from the Publishers Association’s recent report on diversity in the UK market is here.

For your review, here’s our report from last year’s survey work in which women’s progress in leadership positions was becoming firmly evident.