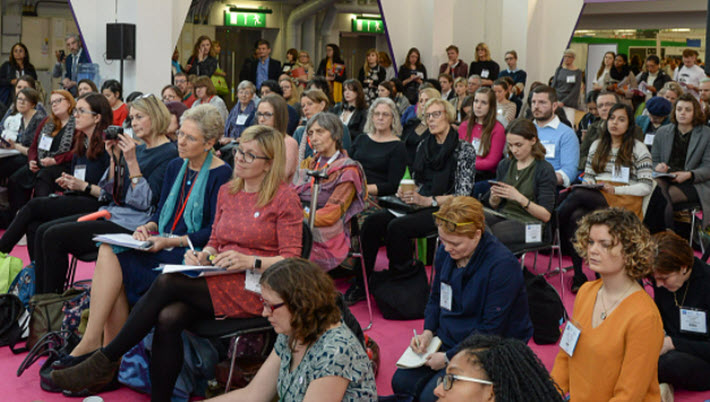 At a seminar event in the 2018 iteration of London Book Fair. Image: LBF

The International Publishers Association‘s programming at London Book Fair—opening Tuesday, April 5) has as its centerpiece a “Sustainability Afternoon” on Wednesday (April 6), which in part again marks, as the association did at Bologna Children’s Book Fair in March, the conclusion of the SDG Book Club.

Indeed, there’s a kind of warm-up session set for Tuesday (April 5), to introduce and put into play the sustainability issue.

Here’s a quick look at these events at the London event, an industry-facing trade show at Olympia London, despite at least one popular cinematic treatment of London Book Fair as a public-facing show in Covent Garden.

All times here are BST, British Summer Time, which is GMT+1.

We recommend that throughout the week you keep an eye on venues for your events, as they’re not necessarily the same as in past iterations of the fair. The introduction of the Main Stage in Pillar Hall, for example, is new this year.

“The Role of Publishing and Culture During Global Conflict”
3:15 to 4 p.m.
Main Stage

This program, led by the United Kingdom’s Publishers Association “considers the role of publishers and the wider cultural industries during global conflict.

It will highlight some of the specific initiatives and responses from the publishing industry to the Ukraine crisis [and] consider how culture can play a role during difficult times of global conflict, and what that means in practice. 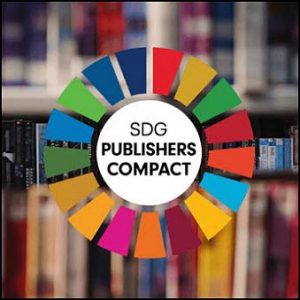 Signatories of the IPA-United Nations SDG Publishers Compact gather for a record photo in Pillar Hall.

The Lancet’s editor-in-chief Richard Horton speaks, and then has a conversation with IPA president Bodour Al Qasimi.

This session is devised to “explore key sustainability initiatives already in progress and share insights from a panel looking at sustainability from a range of perspectives.” 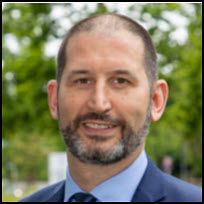 Mark D. Cole, professor of media and telecommunication law at the University of Luxembourg, on “The Answer to Platform Regulation Is in the Regulation of Platforms”

A programming note: Elsevier’s Michiel Kolman is heard with Olatoun Gabi-Williams and Aaron Friedland on the topic of the SDG Book Club and African publishing, in Christopher Kenneally’s “Velocity of Content” podcast from Copyright Clearance Center (CCC), an edition just released today (April 4).

You’ll find the complete podcast here. And below is a preview of the conversation with Gabi-Williams, produced for CCC’s Twitter account.

More from Publishing Perspectives on the work of the International Publishers Association is here, and more on London Book Fair is here.