The 26th iteration in Germany of the ‘I’ll Give You a Story’ project brings reading and environmentalism to schoolkids this year. 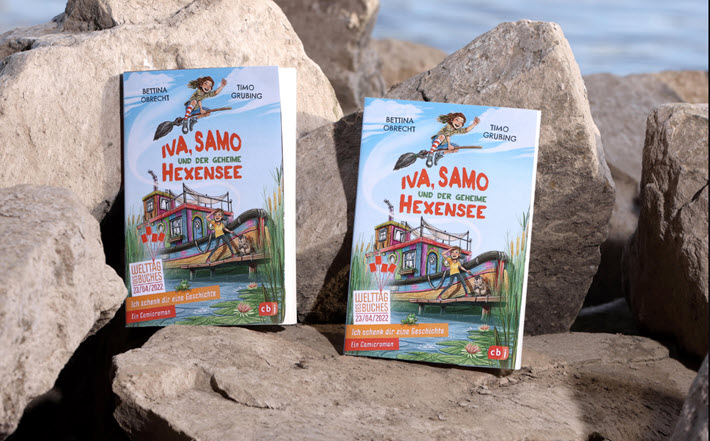 Prien: ‘The World Opens Up to Those Who Can Read’

Between Friday (April 22) and the end of the month, some 1 million schoolchildren in Germany will receive a copy of the comic novel Iva, Samo und derheime Hexensee by Bettina Obrecht and illustrated by Timo Grubing (Penguin Random House Verlagsgruppe). This gift–going into more than 44,000 classrooms–is part of the “I’ll Give You a Story” campaign being supported by the Börsenverein des Deutschen Buchhandels, Germany’s publishers and booksellers association, in support of World Book Day 2022.

With the actual date of UNESCO’s annual World Book Day set on Saturday, April 23–and the actual name of the observance World Book and Copyright Day–the Börsenverein, Verlagsgruppe, and the Stiftung Lesen, the Reading Foundation, are engaged in the 26th edition of the campaign opening today (April 20). Students in the fourth and fifth grades can now exchange vouchers they’ll be given for their copies of the book at some 3,300 participating bookstores.

Also coordinating on support for the program are CBJ Verlag, Deutsche Post, and ZDF. Teachers have ordered their book vouchers for the kids in advance, and media message from our colleagues at the Börsenverein say there’s never been such a high level of interest in the program as they’re seeing this year.

The federal states’ various cultural ministries are supporting the program with funding to finance the printing of the book vouchers. One great element of the program is that–COVID-19 restrictions allowing–many of the students will visit a bookstore with their classmates, getting an experience of handing over a payment (the voucher) in exchange for their book: a consumerist moment of the heathiest kind. 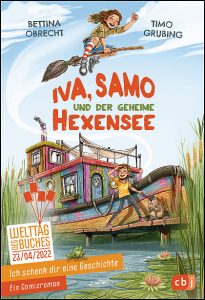 The book, from Obrecht and Grubing, is about two witch children named Iva and Samo, “who are waiting for a great adventure involving friendship and environmental protection.”

On their tenth birthday, they’re given a broom that will take them to a secret lake. “It’s their job,” according to descriptive material about the book, “to look after the body of water for a month. But when an influencer shoots a video by the lake, the idyll is over.

“Fans make a pilgrimage to the location and leave behind their rubbish. A group of children who used to meet regularly on the bank are just as angry about this as Iva and Samo. A joint plan is needed to save the lake.”

Indeed, environmental factors have been taken into account in the production of the book itself.

CBJ Verlag has produced the book on the “cradle-to-cradle” principle with paper from sustainable forestry, biodegradable inks for printing, and no toxic substances, all designed to allow new products to be made from the books’ components. 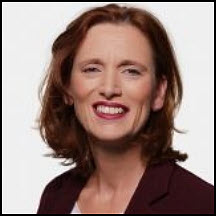 In a prepared statement provided to us by the Börsenverein today, Karin Prien, Schleswig-Holstein’s education minister and current president of the conference of ministers for education, is quoted, saying, “The world opens up to those who can read.

“In the times of the [still ongoing] pandemic, especially when we were in lockdown, we experienced how valuable it is when you can enlarge the world by reading.

“And we are now experiencing again and to a special degree how valuable it is to read up on information and form an opinion on this basis. The conference of ministers of education is therefore happy to support initiatives to promote reading, such as World Book Day and the ‘I’ll Give You a Story’ campaign.

“I hope that as many children and young people as possible will take advantage of these offers and discover the joy of reading.”

Many events and parallel programming are planned for Germany’s World Book Day, and more information is available here.