The inaugural Caucasus and Black Sea Basin conference was the centerpiece of the UNESCO World Book Capital closer in Tbilisi. 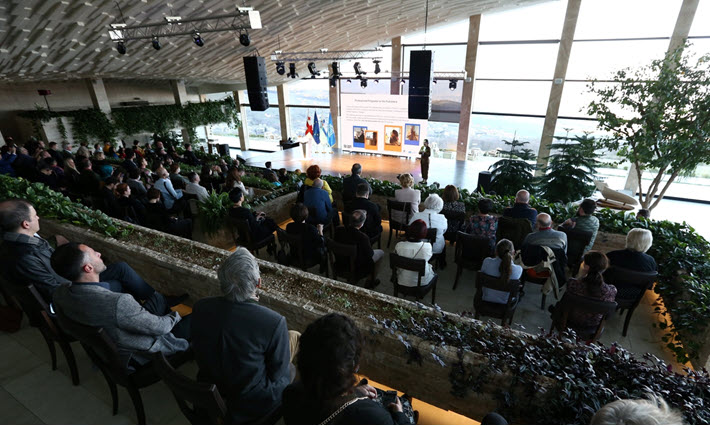 A Conference First in Tbilisi

As Publishing Perspectives readers will recall, very shortly after the close of London Book Fair, the Georgian Publishers and Booksellers Association convened a dual-purpose event in Tbilisi, organizing and hosting the first Caucasus and Black Sea Basin Countries’ Regional Publishing Conference and celebrating the conclusion of the city’s year as UNESCO World Book Capital year and handing off to Guadalajara, the new designee.

A fine representation of world publishing’s leadership was in attendance, even with the tight turnaround following London. This included strong participation from the International Publishers Association (IPA), which initiated the creation of the World Book Capital decades ago, of course, as well as many book fairs’ and conferences’ director-level personalities.

In the two-day conference, those of us who have worked on such events among ASEAN delegations in Southeast Asia might have been reminded of how easily regions that are rich in cultural history, tradition, and importance can live so closely together but without necessarily being in touch—not always even for translation of each other’s literature.

An outsider’s viewpoint on these occasions, however, is always quickly shown up to be much too based on surface comparisons.

The markets and interests represented in the broad gathering of the conference arrived with real distinctions and nuances in terms of challenges and goals.

This is never as benign an exercise as some might expect, resulting in, “You see? We all have the same problems.” The truth is that there are considerably different problems—and advantages—in various markets, however closely they may stand geographically to each other.

The programming devised by  Gvantsa Jobava—deputy chair of the Georgian Publishers and Booksellers Association and an IPA executive committee member—brought such points to light, at least as a starting point for reflection, comparison, and discussion. 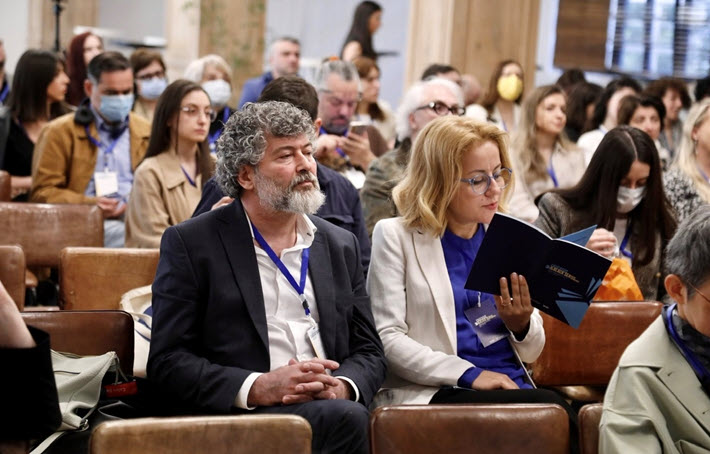 Delegates to the Caucasus and Black Sea Basin Countries’ Regional Publishing Conference in Tbilisi came from Georgia, Armenia, Azerbaijan, Turkey, Ukraine, Bulgaria, and Romania. In the center of our shot here are Shahbaz Khuduogly, Qanun Publishing House, Azerbaijan; and his wife Nigar Kocharli of Ali and Nino Bookstores and the Ali and Nino Publishing House. Image: GPBA

In a panel moderated by Publishing Perspectives, for example, the competition between translated literature from abroad and the cultivation of a local, national authors’ community and readership was a starting point for a range of comments that would include the Romanian market’s impediments caused by a lack of strong state aid and an underdeveloped “habit of reading,” by comparison to other states in Europe.

Commentary from a bookseller in Turkey on a panel moderated by the IPA’s James Taylor revealed that she’s an ebook fan, herself, but doesn’t see digital reading making many strides in the market in the near term—except where rising traffic delays and a population’s growing time spent losing “too much time every day” on the roadways is generating new interest in audio. 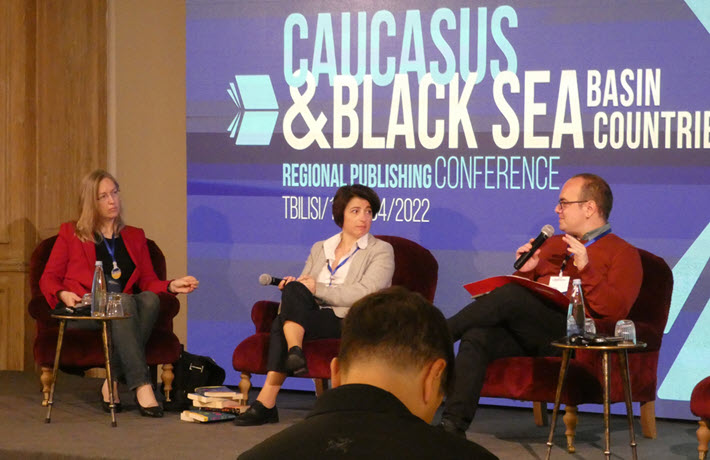 When the Börsenverein’s international and European affairs director and legal counsel Jessica Sänger ably chaired a session on copyright, with guests from both Turkey and Georgia, piracy became a completely overriding focal point of the conversation—in that case pointing to a seriously damaging issue that’s bringing cohesion to a discussion for the wrong reason of its severity.

A discussion among publishers from Bulgaria, Georgia, and Azerbaijan, however, would indicate to moderator Emma House that “stories of survival and success” can look very different, market to market. 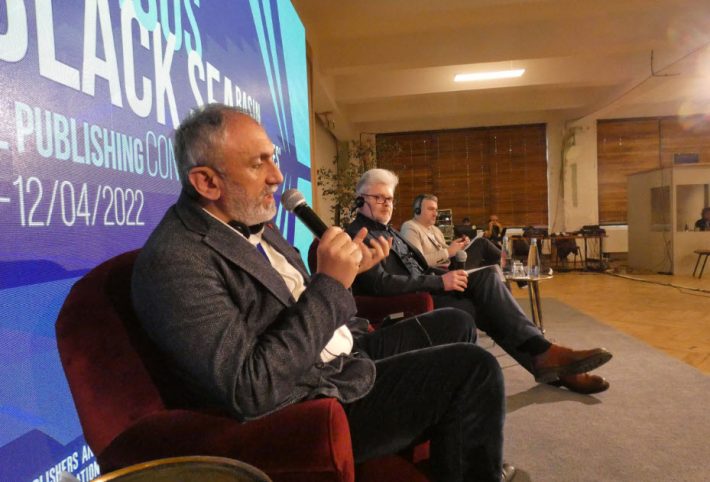 If anything, then, the fact that this conference–a first–was convened by the Jobava and the Georgian association’s leadership as part of the World Book Capital framework directed by Ninia Matcharaschvili, was really the point. This was an exercise in finding and recording baselines for future discussion. Discovery of issues, from the importance of agents in Armenia to Russian expansionism and its impact on so many of these cultures, all needed to be touched on, described, and logged in for future debate and discovery.

More iterations of this new conference context, that of the markets in the Caucasus and Black Sea Basin, now can be held with a clearer picture of their own industries’ topography—even while overshadowed at the moment, of course, by the agonies of the Ukrainian market. 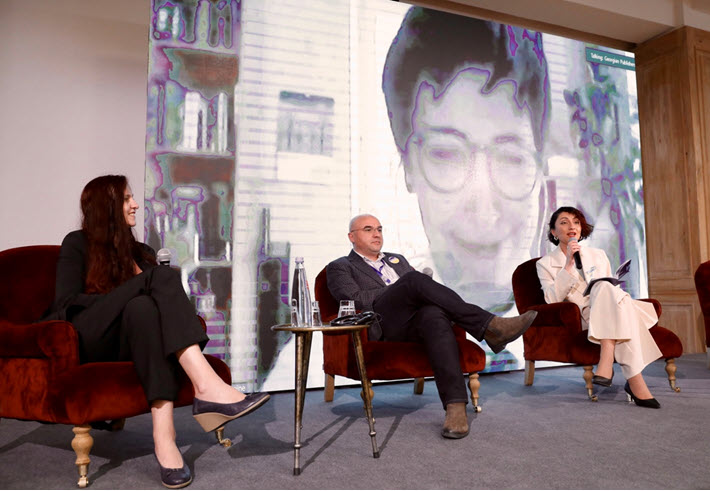 The Caucasus and Black Sea Basin Countries’ Regional Publishing Conference, for all the warm hospitality of our Tbilisi hosts who welcomed us and guests for the conclusion of the World Book Capital year, will return with new coherence in its next iteration—whenever and wherever that might be held—because this initial event took on the importance of the freedom to publish and brought someone as experienced in the topic as Bangkok-based publisher Travsin Jittidecharak to the occasion to lead a discussion. 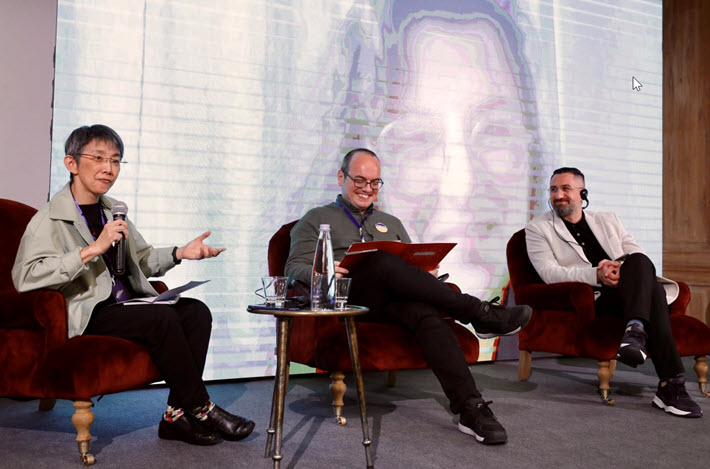 Indeed, in her keynote address for the opening of the conference on April 11, Bodour Al Qasimi, IPA’s president, spoke about the importance of conferences such as this, an event she described as an excellent example of creative collaboration in the region, a success in diplomatic terms, with words and books offering the chance to build bridges and heal divisions.

At the same time, Bodour said, these moments have major importance in their potential as tools for enhancing the publishing economy.

She called on industry stakeholders to push boundaries and overcome obstacles through stronger partnership and teamwork.

Indeed, Bodour used the moment to launch the Georgian translation of  her own book, World Book Capital, giving a reading in English while Jobava told the story in Georgian. 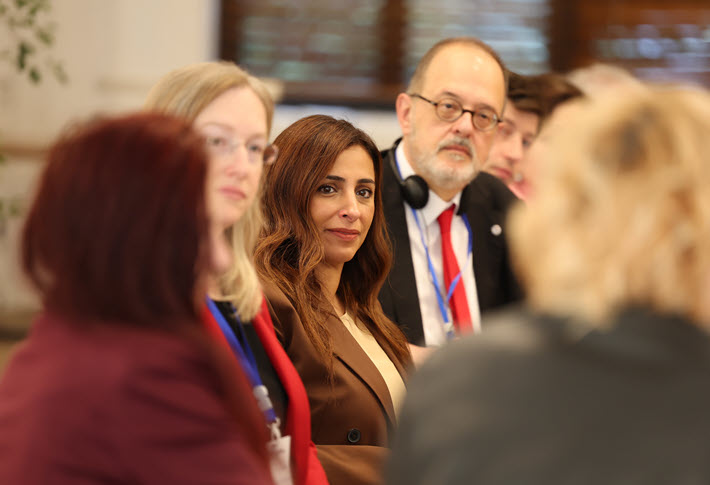 Tbilisi City Hall and the Bank of Georgia are to be congratulated for their support, along with the Georgian Publishers and Booksellers Association and the Tbilisi World Book Capital program and UNESCO, all pulling together to make this start possible in new dialogue, growth, and development. It’s part of a special year in anything but easy times.