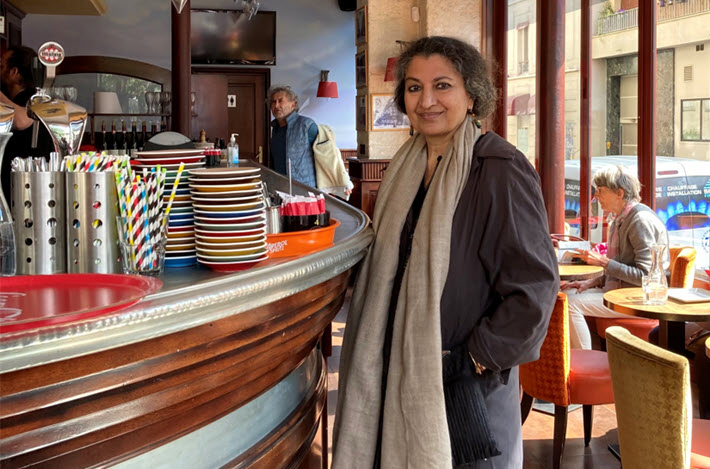 Indian writer Geetanjali Shree was in the French capital for its Festival du Livre de Paris (April 22 to 24), at which India was the guest of honor. Shree, who writes in Hindi, was on a panel with author Perumal Murugan, who writes in Tamil, and Abu Dhabi-based Deepak Unnikrishnan: his mother tongue is Malayalam but he writes in English. Among the subjects they discussed were multilingualism and translation. 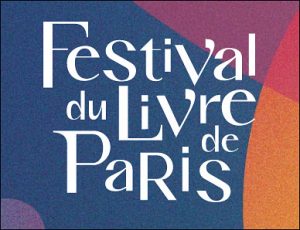 Shree also spoke at a bookshop about her work, and she visited her French publisher, Éditions des Femmes, which published her fifth novel, Ret Samadhi, au-delà de la frontière (Beyond the Border), translated by Hindi literature professor Annie Montaut in 2020. The book was shortlisted for the 2021 Prix Émile Guimet for Asian literature and was translated into English by Daisy Rockwell, who works from Urdu and Hindi. It was published in 2021 under the title Tomb of Sand by Tilted Axis Press.

Tilted Axis founder Deborah Smith was the first translator to win the International Booker Prize along with author Hang Kang for The Vegetarian in 2016. Tomb of Sand has been shortlisted for the 2022 International Booker Prize. The winners are to be announced May 26. Although four Indian authors who write in English have won the Booker Prize for Fiction in the past, this is the first time a novel translated from Hindi has been shortlisted for the Booker Foundation’s international award. 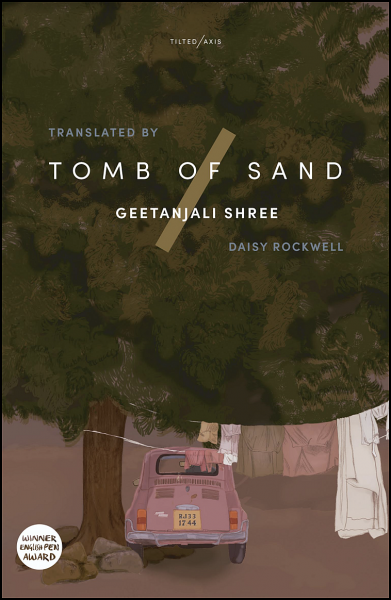 Geetanjali Shree’s formal education was in English. Although English is “the big language, the language of higher education and success,” she says she chose to write in Hindi because it was intuitive for her, and sensual. The political implication of choosing Hindi over English only came to her later, she says, much like her decision to write about women and subjects central to feminist discourse.

In a recent interview with Kena Chavva in the Columbia Journal of Literary Criticism, Tomb of Sand translator Rockwell said, “Publishers in the US and the UK have zero interest in South Asian translation. Every now and then somebody gets something through, but it’s usually a quirk. I did this partly not just for my work, but for all of our work. … It’s not just a big deal for me, or a big deal for Hindi, but for all of us translators raising awareness that South Asian literature isn’t just written in English.”

Shree says she believes this is the case, in part because, “By virtue of the power that the English language has in the world, it makes it somehow quite inward-looking.”

Even if “English itself is not one language,” she says, English speakers “are so content in their own world that they haven’t looked enough at other languages. But there’s a growing realization about this.” 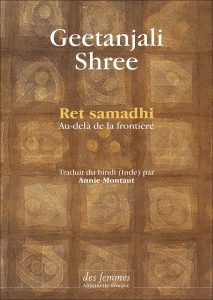 Until the Booker shortlisting of Tomb of Sand, Shree says, “To date I’d say there’s been more interest in South Asian languages on the part of non-English speaking countries. In the literary world, the US and UK have looked at literature from India written in English.”

The translator Rockwell maintains that Hindi is “a big, blousy language that has many manifestations and can take in words indefinitely from any language, especially from English, Persian, Portuguese, and Sanskrit, and so on…”

Shree agrees, saying, “We belong to a very eclectic moment. Even earlier there was a give-and-take, but now it’s like a storm. It’s like you’re being showered by language.” Moreover, she likes to be inventive with Hindi, she says.

Her writing is therefore not easy to translate, and Shree works closely and patiently with her translators. One of her translators from French is Swiss and he told her jokingly that he’ll have lost all his hair by the time he has finished translating her.

In India itself, there’s a growing realization that translation between the 22 languages recognized by the constitution is important—although many more languages are spoken in India—and attempts are being made to work out better resources, Shree says.

“In India, my books are not translated into other languages. Even in India and South Asia, the temptation is to go from an Indian language to English. If my books are translated into English, they become available to an English-educated Keralite or Gujarati, but not to others. It’s a skewed situation that must be worked on. We want to encourage a pluralistic multilingual world.”

‘The Daily Collision of Events’ 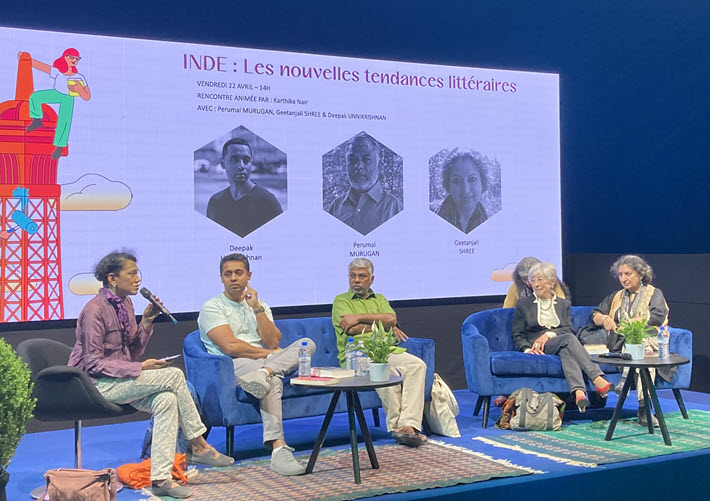 In her appearance at the Festival du Livre de Paris, Geetanjali Shree, far right, is joined by her French translator, Annie Montaut. Karthika Nair, left, moderated the event, Deepak Unnikrishnan is seated second from the left and Perumal Murugan is on the sofa with him. Image: Publishing Perspectives, Olivia Snaije

In many ways, Shree’s attitude toward language echoes a universality in her body of work that she enjoys when her European readers, for example, recognize themselves in the mother figure in Mai, her novel published in 2000 and translated into English by Nita Kumar in 2002 (Kali for Women). “I thought people would be interested in the exotic East and oppressed women in India,” she says, “but what really surprised me was how many women identified with Mai.”

Again, in Tomb of Sand her impulse was “humanitarian” and “what kept inspiring me was a sense of freedom,” whether on the subject of Partition, or her octogenarian character’s friendship with a hijra (transgender) woman. Shree says that her work isn’t directly about Partition—although it’s in the background—and more about how its consequences have affected lives.

“Borders shouldn’t seal out one side from another,” she says. “Borders are and should be bridges. My character says everything has a border—our organs, our handkerchiefs. The border is a meeting point of two sides rather than a separation.”

Shree’s character Rosie, the hijra, “came in the dynamic of the story. In freedom came the question of who might be befriended. Everyone is a potential friend. … My impulse is to transform every border into a bridge.”

Shree’s new novel, which she wrote in record time during a writer’s residency in Germany just before the pandemic, is remarkably prescient. It’s set in a family and is about death and “how a person comes alive when he’s not there anymore, the ironies of life and relationships, and the sadness of loss.”

It’s nearly ready to go to print, but Shree wonders about where the world and literature are now: “What is our future, and what are we learning? Don’t we need to slow down? In all this, where does the book fit in? I’d like to feel like I can reconnect to the world. The world has slipped through our fingers, the daily collision of events which give off political and human reverberations need time when we write, it’s not about what’s happening immediately.”

This is Publishing Perspectives’ 81st awards-related report produced in the 83 publication days since our 2022 operations began on January 3.