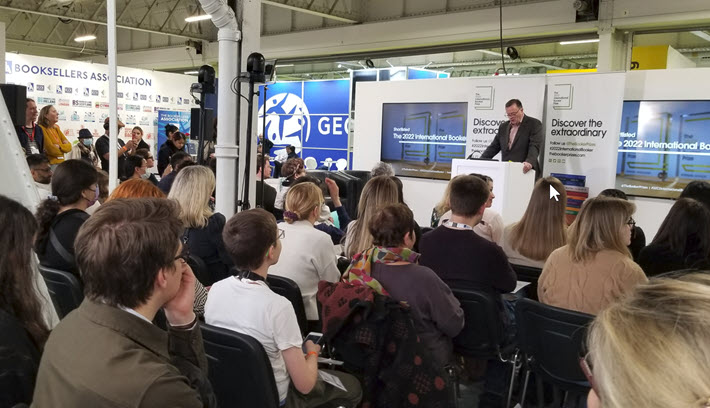 The translator Frank Wynne, chair of the International Booker 2022 jury and a champion of appropriate payment for translators, announces the shortlist to a packed Buzz Theatre at London Book Fair on Thursday, April 7. Image: Publishing Perspectives, Porter Anderson

Tshortlist has been announced today (April 7), as the International Booker Prize this morning named its 2022 top half-dozen titles.

Here at London Book Fair on its final day, the Booker Foundation made its first such announcement appearance at the trade show, for a crowd of colleagues and well-wishers.

For any background you may need on this year’s competition, please see our longlist announcement here.

Naming the six fortunate shortlistees this morning was jury chair Frank Wynne, who was serenaded by the entire gaggle at the Buzz Theatre with “Happy Birthday” on his 60th.

Wynne is not only the first translator to have served in this capacity, but also a new hero among his fellow translators and those who appreciate literature in translation for having called for publishers to pay their translators royalties.

He made an intensely influential appeal last month in a BBC Radio 4’s Front Row appearance with the Booker Foundation’s handsome supp0rt and in concert with translator Jennifer Croft, who has just been shortlisted for a second translation of an Olga Tokarczuk work, this year for The Books of Jacob. With Tokarczuk, she was awarded the 2018 Booker International Prize for her translation of Flights.

We have a detailed article on Wynne’s and Croft’s efforts for translators, which are being supported by the Society of Authors and many others. This is among the most heavily read of our stories so far in 2022. 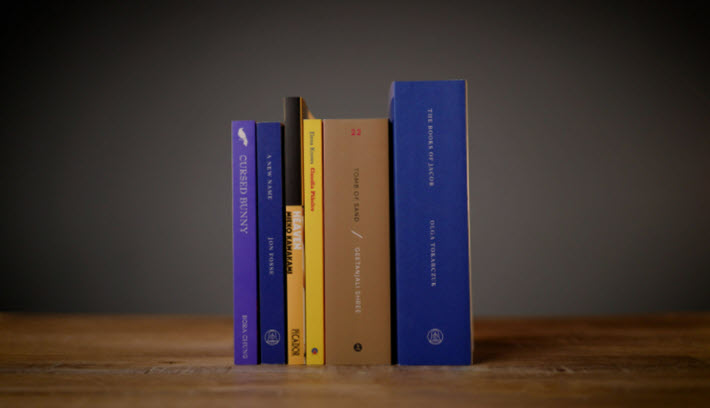 The shortlist is dominated by independent publishers. Tilted Axis and Honford Star are new to the prize.

The shortlist spans six languages: Korean, Norwegian, Japanese, Spanish, Hindi and Polish, with settings ranging across Europe and Asia, from the mid-18th century to contemporary times.

The winning translator and author will split £50,000 (US$65,835). An announcement of those winners is anticipated for May 25 at London’s One Marylebone suite of event venues.

Wynne is joined by:

As Publishing Perspectives readers know, the longlist being announced today is not for the Booker Prize for Fiction.

The International Booker Prize is the younger sister to the Booker Prize for Fiction, and was established in 2005 to honor an author and translator equally for a single work of fiction translated into English and published in the United Kingdom or Ireland.

This is Publishing Perspectives’ 70th awards-related report published in the 69 days since our 2022 operations began on January 3. 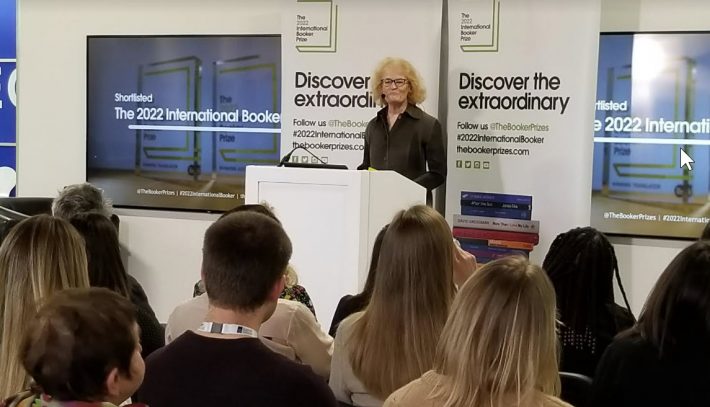 The administrator of the International Booker Prize is Fiammetta Rocco, senior editor and culture correspondent with The Economist. She introduced the shortlist announcement on April 7 at London Book Fair. Image: Publishing Perspectives, Porter Anderson

More on London Book Fair, which ends today, is here.