In its second stage of a multiyear study, Elsevier looks at pressures, challenges, and potentials in research in the next 10 years. 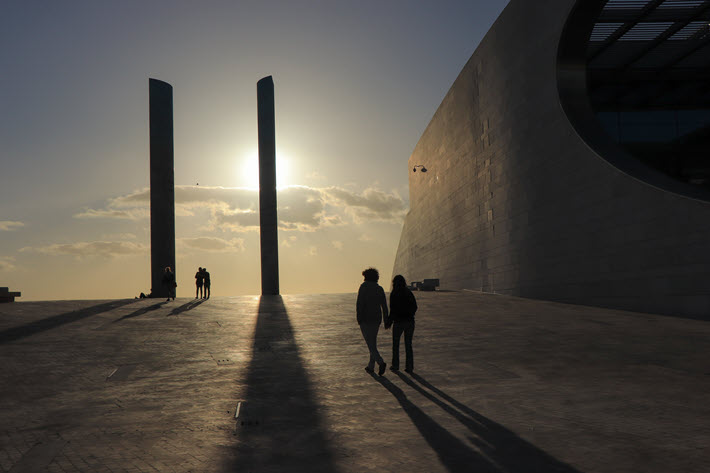 International Input on Prospects and Potential

In its second round of research-into-research, Elsevier has returned to the field of its initial inquiry in 2019, when a study sequence was begun in an attempt to look at how research might look and fare in a decade.

With input from more than 1,000 researchers in an internationally structured study, the company in 2020 (1,173 respondents) and 2021 (1,066 respondents) continued the work, releasing nine days ago, on April 20, a new set of insights targeting pressures on publishing, funding, and women in research, with an eye to opportunities developing in funding sources, technology, and collaboration.

Publishing Perspectives readers are familiar with many of these issues in academic publishing and research, in part through our January interview with Amsterdam-based Elsevier senior vice-president Michiel Kolman, who is specialized in the publisher’s research networks and a former president of the International Publishers Association‘s (IPA).

In communicating with news media about the new report this month from its London offices, the company poses several new top-line findings:

That concern about university enrollment in the States is reflected in Nina Shapiro’s report for the Seattle Times on Monday (April 25), pointing to “a collective drop in undergraduates,” she writes, “of nearly 7 percent during that time period, with some schools’ losses double or even triple that” across four-year college campuses. Not just in the Northwest but in many parts of the United States, there’s a deepening departure from college education by American males in particular. 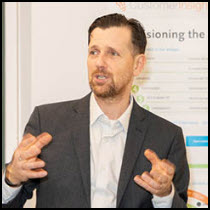 Such points are reflected as Elsevier surfaces its Research Futures Report 2.0, and despite the publisher’s use of that rather worn-out “2.0” designation for a second edition, the picture Elsevier’s team led by research director Adrian Mulligan is interesting for its depiction of what may be a lasting inflection point impacted by the coronavirus COVID-19 pandemic.

“There’s uncertainty and added pressure on the research community,” Mulligan says, “because of the pandemic. Universities, governments, research information providers, and funders working collaboratively are best positioned to help researchers manage that pressure.

“Despite this uncertainty, researchers also believe there are long-term opportunities, most notably new levels of collaboration and openness across the research community, plus new sources of funding and technologies.”

The study’s researchers see changes in many areas, from waning influence by public funders over research to doubts about how well blockchain can fulfill its promise, from the role of the scholarly journal “transforming to meet modern needs” to changes in researcher workflow anticipated as an impact of new technologies. 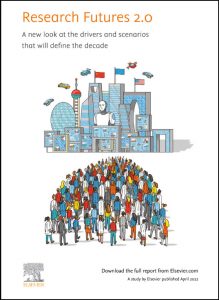 Key points in the report:

For women, a key area of our conversation with Kolman, unique challenges persist, in the purview of the new study.

“Women reported having less time to do research during lockdowns,” the company reports, “which could slow or hamper their future career prospects. Sixty-two percent reported they were finding it difficult to find a good work-life balance during the pandemic, compared to just 50 percent of male researchers—a trend that could have significant negative long-term effects on the careers of women in research.”

Ironically, women in research were also seen embracing technology “faster than their male counterparts: 53 percent of women scientists [said they] think the use of technology in research will accelerate over the next two to five years versus 46 percent for men.”

And women are deemed in this study to be more likely to have shared their research with the public than men, 60 percent women vs. 55 percent men saying they’ve shared their work publicly.

In the chart below, you see study response analysis indicating that more women and younger researchers said they’d seen project stoppages during the pandemic years. 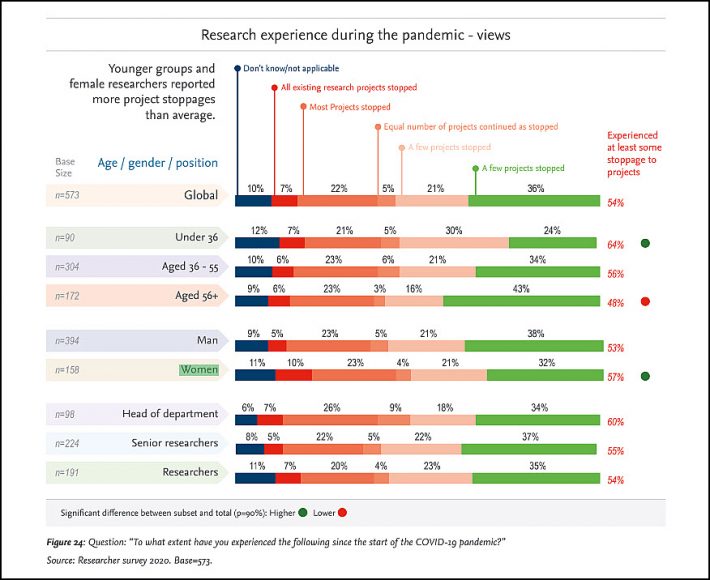 With general trends rising in attitudes about collaboration and the acceptance of artificial intelligence, the study’s authors report, “Attitudes toward the use of AI in peer review are perhaps where we have seen the greatest shift in attitude. 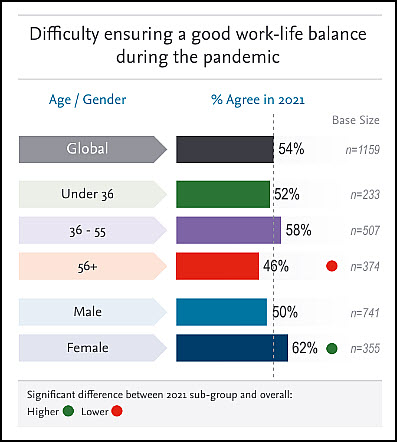 “Twenty-one percent of researchers agree they’d read papers peer-reviewed by AI, a 5-percentage point increase on 2019. Those aged 55 and under are the most willing to read AI-reviewed articles (21 percent), while those aged 56 and over [say they] have increased their willingness compared to a year ago (19 percent, up from 14 percent last year).  At the same time, most researchers surveyed continue to object to AI peer review, with almost two in three unwilling to read such articles (58 percent)–a similar proportion as in 2020.”

A mixed picture develops around the funding question.

“Despite the fight against COVID-19 placing a spotlight on the importance of research,” Elsevier’s study authors write, “funding continues to be a major concern for the research community, with half (50 percent) stating there’s insufficient funding available in their field. Just one in four (24 percent) of researchers [say they] believe there’s enough funding for their work, and, worryingly, this figure has declined from nearly one in three (30 percent) in 2020.

“Researchers cite fewer funding sources, increased competition, changing priorities, and the diversion of funds to COVID-19 related fields as the reasons behind this trend.”

Some research money is likely to come from businesses, say some of the respondents, with 41 percent saying they expect corporate funding for research to increase. This, as government research funding has risen. Funding in “materials science” has risen best, per the report, “with 35 percent saying available funding is sufficient, “almost three times the 12% who were satisfied with funding levels in 2020.”

You can access the Elsevior Research Futures Report 2.0 here. 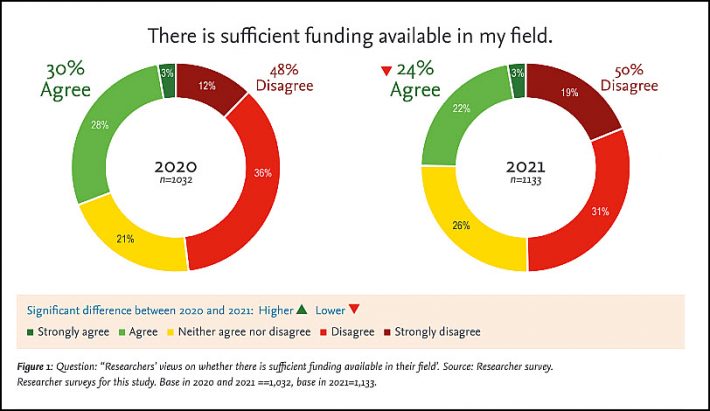