Our pre-Bologna Children’s Books Edition gives us an opportunity to hear from IBBY on Putin’s assault on Ukraine—and its children. 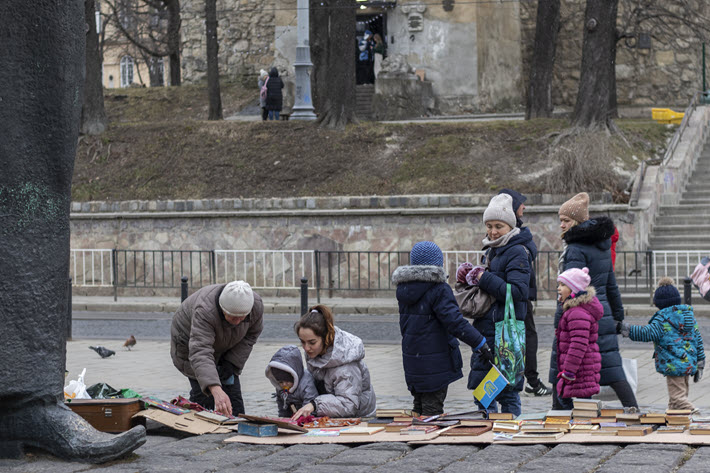 In the western Ukrainian city of Lviv, children and women are seen selecting books being sold on the street, March 8. Image – Getty iStockphoto: Serhii Ivashchuk

‘Children Suffer First and They Suffer the Longest’

As our Children’s Books Edition goes live today (March 11), Marc Santora reports for The New York Times that three missiles have struck the city of Dnipro in central Ukraine. The missiles, Santora reports, “struck near a kindergarten, a residential apartment building, and a two-story shoe factory, according to the Ukrainian government.”

These reports, of course, are among the latest in a lengthening series of confirmations that civilian targets of Russian aggression include venues in which children habitually are found—schools, kindergartens, medical facilities. The savagery of Putin’s onslaught is intensifying.

Figures are shifting frequently, but by Thursday (March 10), the United Nations, as reported by Dan Mangan at CNBC, had a figure of 549 civilian deaths, 41 of them children. The Officer of the High Commissioner on Refugees “believes that the actual figures are considerably higher,” Mangan writes.

We’d like to give you the text today of the statement on the violence against Ukraine from the executive committee of the International Board on Books for Young People (IBBY), as provided by its offices in Basel.

“Throughout history, war affects the innocent and above all the children.

“They have nothing to do with the impulses of national leaders.

“We know that when children are in a country at war they suffer great trauma, even when they escape physical wounds. The same is true for children who suddenly lose their whole sense of safety and peace. This can be deeply traumatic.

“We believe that literature, particularly literature for children, has the power to change the future, to teach the next generations not to destroy but to negotiate, as there is nothing more destructive than war.

“IBBY International is deeply concerned about the current invasion by the Russian military into the sovereign state of Ukraine.

“IBBY has a long connection with Ukraine. The IBBY section in Ukraine has been an active member of IBBY since 1997 and we have participated several times in the Book Arsenal Festival in Kyiv, where we have also exhibited the IBBY travelling collections of books.

“Our thoughts are with our friends and colleagues at IBBY Ukraine, at the Book Arsenal Festival—all of whom are working to bring children and books together.

“We must also remember our friends and colleagues at IBBY Russia in Moscow and in St Petersburg, as they struggle to process this tragic situation.

“IBBY stands first, last and foremost with the children whose physical and mental health are at risk because of this war, of which they are totally innocent.

“IBBY members everywhere deplore the current situation, and we hope that international humanitarian law can be re-established before there is more loss of life.

“Since its inception in 1953 following the devastation of World War II, IBBY has worked around the world to promote international understanding through children’s books. When children suffer, we work together to support those who serve children and their families, especially in times of crisis.”

And has been reported this morning by Sunlen Serfaty on CNN’s New Day, Olena Zelensky, Ukraine’s first lady, has said on social media, “When Russia says that it is ‘not waging war against civilians,’ I call out the names of these murdered children first.” 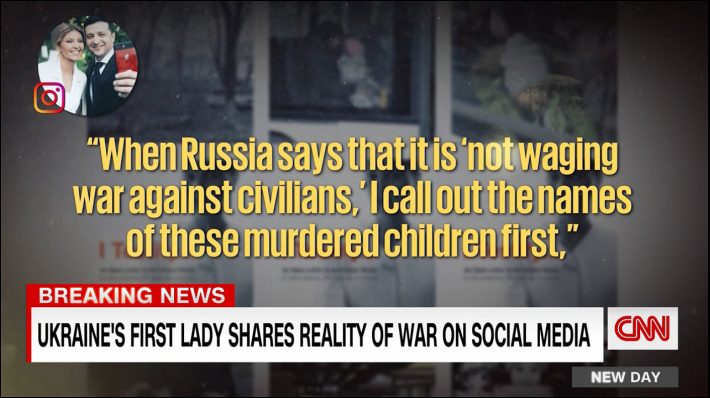 Find all of our coverage of Vladimir Putin’s war on Ukraine and its impact on the publishing industry and its players.

More from Publishing Perspectives on the Ukrainian market and Vladimir Putin’s war in Ukraine is here, more on the Russian market is here. More on the freedom to publish and the freedom of expression is here. And more on children’s books and literature for younger readers is here.