The understandable ‘ban all Russian publishing’ response from some to Putin’s assault on Ukraine overlooks Russia’s independent book sector. 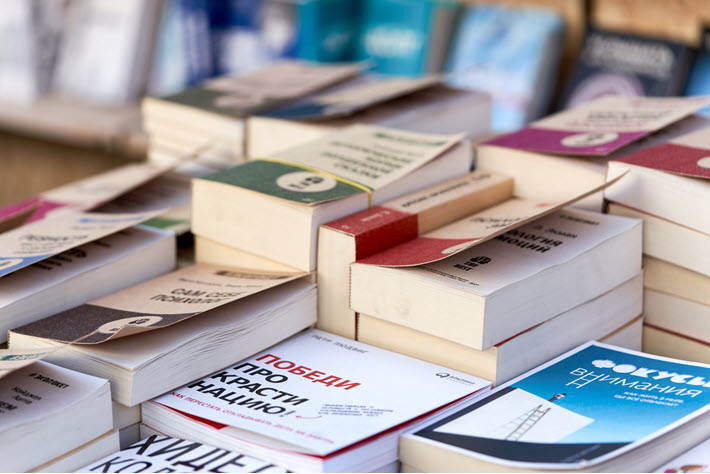 ‘The War Must Be Stopped’

In the dangerously escalating crisis of Vladimir Putin’s unprovoked war on Ukraine, some in the world publishing industry are inclined to assert that all of their counterparts in the Russian book business support the Kremlin’s inexcusable military assault.

This of course is not the case, although emotions are running understandably high in the extraordinary emergency of the moment.

At a time when the unassailable sanctity of human life is thrown into such stark relief, it’s easy to make blanket statements about what should be done to “all Russian publishers.” Rash comments, however, are not only hurtful but counter-productive. What’s needed in Russia’s independent publishing community is a sense that the international community understands that Putin’s aggression is not theirs.

Some of those who call for a break with “all Russian publishing” simply don’t know that the book business in the Russian Federation is not monolithic. Others know this very well, but still are struggling to reconcile what’s happening. You see this in the comments to Publishing Perspectives this week of Julia Orlova, the CEO of Vivat Publishing in hard-hit Kharkiv.

At one point, Orlova says, “We [Ukrainian publishers] can no longer go to international exhibitions, festivals, fellowships. So we believe that it would be fair to ban the participation of the aggressor country, Russia, and even the participation of individual Russian publishers. It’s unfair that Ukrainian publishers, because of Russian aggression, are now forced to give up their professional activities and defend their homeland with weapons in their hands or to sit in shelters, while Russian publishers will be able to attend exhibitions and international forums, fellowships, and other events.”

Her feelings are understandable, of course, but they don’t reflect the reality that many if not most members of the book business in Russia are, even in a dangerous crackdown on dissent, trying to make their solidarity with Ukraine known.

In our coverage of the call from the Lithuanian Culture Institute for the three major trade shows to state their positions—Frankfurter Buchmesse, Bologna Children’s Book Fair, and London Book Fair—you could see the shows’ organizers working to respond carefully, speaking of not cooperating with Russian state-operated elements, not with independent parts of the publishing community.

At Frankfurter Buchmesse, for example, the Russian national stand has not been a joint exhibition stand created by independent Russian publishers. In the past, that collective stand was organized by the Russian state—by cultural departments of the government itself—and it offered events for the Russian community living in the German Rhine-Main region.

Frankfurt’s administration has responded to questions by clarifying for news outlets that its suspension of cooperation with the Russian state’s institutions in charge of organizing the Russian collective stand is “not directed against Russian authors and the accessibility of their publications.”

Frankfurter Buchmesse, “will continue to admit individual stands by Russian publishers,” the follow-up clarification from Frankfurt reads, although their participation in the near term is likely to be hobbled if not impossible because of sanctions being imposed by the international community including restricted payment transactions, restrictions on air travel, and so on. 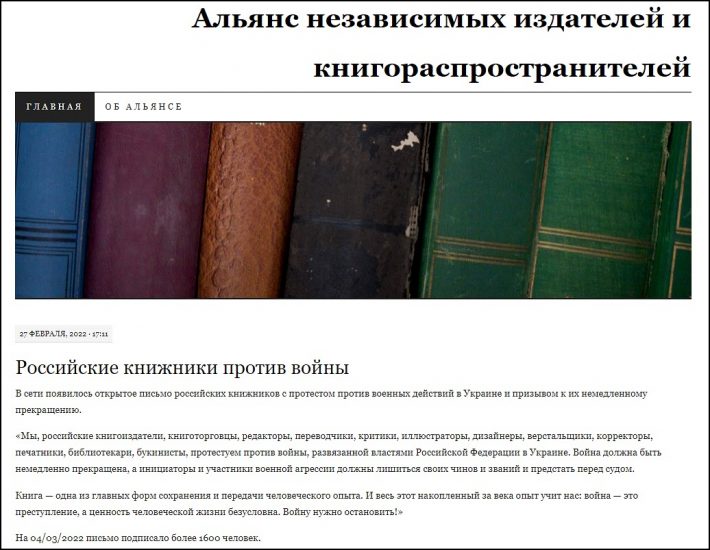 In a recent open letter from the general director of Russia’s largest publishing house, Eksmo, Evgeny Kapyev makes the point that “War and its victims are unjustifiable, and further escalation can cause irreversible consequences.” 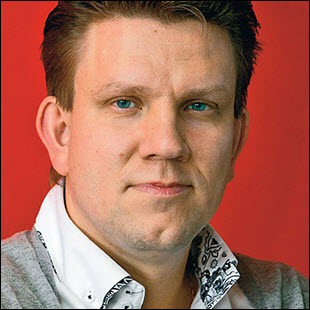 He goes so far as to say that publishers bear some responsibility in the ignorance and xenophobia that can plague a population, writing, “We are [among] those responsible for the development of humanity’s ideas and mutual understanding.

“The fact that for many people still using weapons to settle an argument, rather than words, is our dramatic deficiency.”

And another open letter, Russian Scribes Against the War, has been gathering signatures for days at the simple, unadorned site of the Alliance of Independent Publishers and Book Distributors, reporting that as of today (March 4), more than 1,600 workers in the Russian book business had signed it.

The Alliance’s background content refers to “about 100 independent Russian publishing houses putting at the forefront not so much profit-making as
educational, social-niche, humanitarian activities.”

The letter was created on Sunday (February 27), three days after Putin opened his assault on Ukraine.

The statement that publishing players in Russia are signing reads:

“The war must be immediately stopped, and the initiators and participants in military aggression must be stripped of their ranks and ranks and brought to justice.

“The book is one of the main forms of preservation and transmission of human experience. And all this experience accumulated over the centuries teaches us: War is a crime, and the value of human life is unconditional. The war must be stopped.”

The alliance’s site is largely a discussion thread. You can read about the topics and concerns they normally address—trends in bookselling, the competition of electronic entertainment media, “expanding the reading space and solving distribution problems,” maintaining the status of books and reading among cultural values amid contemporary challenges, and the importance of independent publishing. These are talking points familiar to publishing people in many parts of the world.

And in signing on to a protest of Putin’s war, Russians may expose themselves to considerable risk. Since Publishing Perspectives began monitoring the “Scribes” list of signatories, that list has disappeared from the site—along with the link formerly there to use in adding a signature. It’s unknown whether this is a deliberate adjustment to the page.

Update: March 4: As it would turn out, and as Reuters Moscow was reporting, the Russian parliament on March 4 passed ” a law imposing a jail term of up to 15 years for spreading intentionally ‘fake’ news about the military, stepping up the information war over the conflict in Ukraine. … Lawmakers passed amendments to the criminal code making the spread of ‘fake’ information an offence punishable with fines or jail terms. They also imposed fines for public calls for sanctions against Russia.”

Much attention was given to the instance widely reported Thursday (March 3) in which an elderly woman was detained on March 2 by police in riot gear during a street protest in St. Petersburg. CNN has Reuters’ video of that even here.

This, as Reuters London today reports that the imprisoned opposition figure Alexei Navalny has called for protests on Sunday (March 6) in Moscow’s Manezhnaya Square and St. Petersburg’s Gostiny Dior.

Various media reports say the total number of detainees in war protests so far may have reached 8,000 or more in the week since the Russian invasion of Ukraine began.

As Reuters writes it, “All forms of protest in Russia have essentially become illegal since the onset of the coronavirus pandemic for what authorities say are safety reasons. Thousands of people have been detained protesting against the invasion since last week.” Those detained, as reports clarify, can find the repercussions severe, with charges by the state lingering on their records for years and hampering employment and education.

Public protest in Putin’s Russia may be too dangerous for many in publishing to risk. But assuming that all Russian publishers are Putin backers is as blunt and instrument of assumption as an autocrat’s use of military force against hospitals, schools, and public squares.

It’s a time when discernment and care are important, especially in the business of literature–in which words count.