The Brazilian Publishers at Bologna will have an SDG Book Club Portuguese display, as the IPA wraps up these curations for kids. (Sponsored) 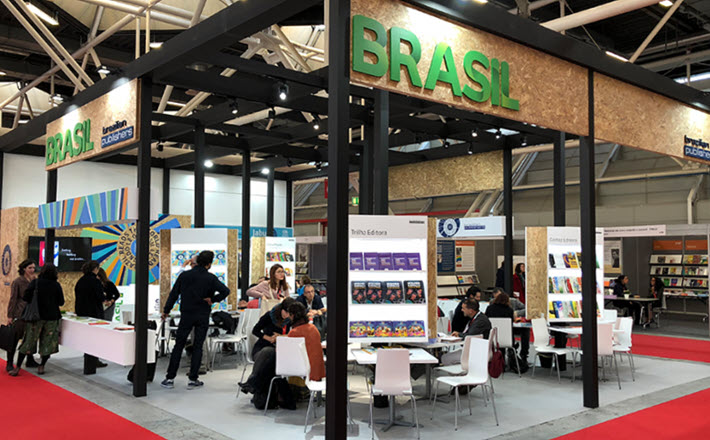 An Event on Bologna Tuesday: SDG Book Club for Kids

As Publishing Perspectives readers will remember, the SDG Book Club was activated during “UN Week” in New York in September 2018, a cooperative effort between the International Publishers Association (IPA) and the United Nations’ outreach division. Welcomed at the time by UN secretary-general António Guterres, it would go on to have an opening event at Bologna Children’s Book Fair in 2019, with its first reading list supportive of the first goal: the elimination of poverty.

On Tuesday (March 22), the SDG Book Club will come home, in a sense, with a 9:15 a.m. program in the Authors’ Café area. The program will be publishing its final reading lists and will announce a collaboration with the Canada-based reading platform Simbi. We have more information about that event below.

At the same time, the Brazilian special chapter of the SDG Book Club will be represented at the trade show by a strong presence in Bologna of Brazilian Publishers, the organization familiar to Publishing Perspectives’ readership for its internationalization of Brazilian editorial content.

The Brazilian team began work in the project in 2020 in association with Portugal’s effort, as the Brazilian Book Chamber (CBL) started working on it with the National Foundation for Children’s and Young People’s Books (FNLIJ), which is the Brazilian section of IBBY, the International Board on Books for Young People. 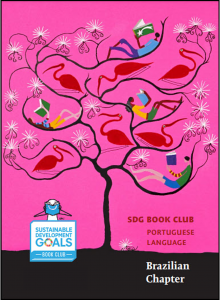 In addition, the Brazilian Federation of Associations of Librarians, Information Scientists, and Institutions (FEBAB) were involved in Brazil’s pace-setting engagement, which would lead to the registration of more than 1,100 pertinent titles and a selection of 175 works of literature chosen for the project.

So it is that as IPA leads Tuesday’s session on the project-capping young readers’ literature lists reflecting the 17 Sustainable Development Goals, the Brazilian delegation to the trade show will have a display at its stand (Hall 30, B4C3) of books that have been curated for the Brazilian chapter of the Portuguese-language SDG Club.

“This is an excellent opportunity for the international public to get to know and have a deeper contact with this rich and well-crafted project,” says the Brazilian Publishers’ Fernanda Dantas, “which had the support of Brazilian Publishers for the creation of the catalogue.”

In her catalogue for the Brazilian chapter’s curation, Dantas writes, “For publishers participating in the Brazilian Publishers Project, the Book Club goes far beyond helping to build a platform to encourage the reading of stories in Portuguese and the dissemination of the SDGs to children all over the world: Having books among the 175 selected for the Book Club and appearing in this catalog represents a business opportunity for the Brazilian publishing houses.”

Bologna Children’s Book Fair trade visitors will note that Dantas is a speaker in the Bologna Book Plus Translation Forum from Jacks Thomas and Orna O’Brien on Wednesday morning (March 23), the session on “Hot Topics in Translation Rights.” More on the Book Plus programming is here.

So it is that publishers participating in the various linguistic and regional assets of the SDG Book Club may well have discovered that there can be good business in doing work that supports the best intentions of a needy world.

Michiel Kolman, then president of the IPA, helped lead the development with the United Nations team, bringing the SDG Book Club to life. On Tuesday, he’ll head up the program at Bologna Children’s Book Fair, moderating the discussion with:

At the core of the conversation will be a project that has gathered more than 300 books for children in those official UN languages and additional tongues, all relevant to the 17 Sustainable Development Goals.

At London Book Fair (April 5 to 7), the program will have another event, in that case a session called “SDG Book Club: How Important Is Sustainability in Children’s Literature?” with another Brazilian, IPA vice-president Karine Pansa; Olatoun Gabi Williams (Borders Literature for all Nations); and Irina Lumelsky of United Nations Publications.

“When we started the SDG Book Club, we knew that there were lots of great books out there for children to learn about the crucial issues facing our future. The current war in Ukraine and the climate crisis really put that into sharp focus.“Michiel Kolman, Elsevier

Kolman was joined by Carole Bloch, executive director of the Project for the Study of Alternative Education in South Africa (PRAESA) and vice-president of IBBY, the International Board on Books for Young People. Other organizations engaged in the SDG Book Club include the International Federation of Library Associations and Institutions (IFLA), the European and International Booksellers Federation (EIBF) and BolognaFiere.

The intent has been to bring curated lists of reading for students and teachers, worldwide, supportive of the UN’s 17 Sustainable Development Goals. That framework of goals, called the SDGs, was put into place in 2015 and came into force in January 2016. Those goals are the pillars that anchor the UN’s 2030 Agenda for Sustainable Development. The concept of the new book club’s development is meant to support all 17 of the goals.

As you can see from our coverage in the ensuing years, the SDG Book Club has operated in the official languages of the world body—Arabic, Chinese, English, French, Russian, and Spanish. And along the way, new language-based “chapters” have developed, as well.

One of the most successful and ambitiously embraced such initiatives was the Portuguese-language SDG Book Club. In addition to the chapters in Brazil and Portugal, there have also been language- and or region-specific chapters developed for Africa, Norway, and Indonesia. 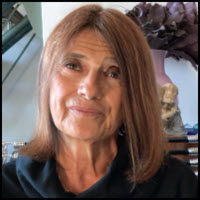 IBBY’s executive director, Liz Page, is quoted, saying, “It has been so inspirational to see the SDG Book Club grow from an ambitious idea to a comprehensive list of brilliant books for children about some of the biggest challenges we face. A big thank you to SIMBI for teaming up with us to celebrate this great collection.”

Simbi co-founding CEO Aaron Friedland says, “The SDG Book Club publishers and supporters have built a library of books that truly matter, and together we can bring these stories to all children everywhere. These powerful and important stories … encourage children around the world in following their reading journey to learn about the SDGs in a fun, engaging, and impactful way.”

At the acting head of the United Nations Publication division, Irina Lumelsky, says, “‘Peace, justice and strong institutions’ [SDG No. 16) was one of the last SDGs we added to our reading lists but never has it felt so timely.

“We need peace, just like we need to end poverty and reduce inequalities. Books play such a valuable role in helping our children to understand the issues of our time and to learn how they can contribute to a more sustainable and peaceful world.”