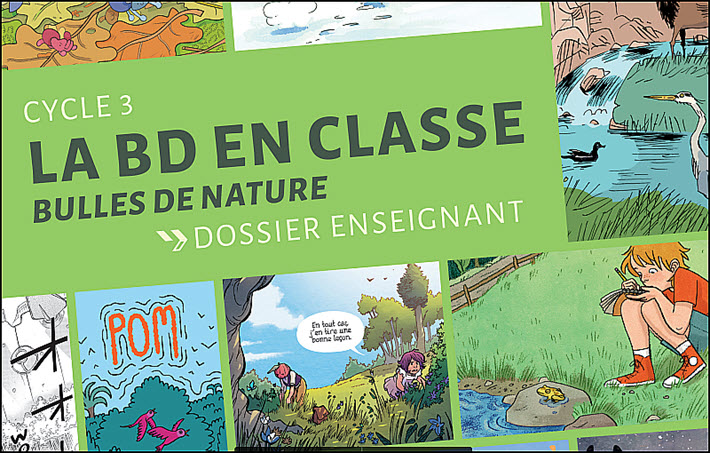 The French publishers’ association, SNE, is rolling out its second round of ‘Comics in the Classroom’ to promote learning and reading skills.

‘For Avenues of Reading and Reflection’

With a title like “Bubbles of Nature,” the Syndicat national de l’édition (SNE-France) today (March 23) has announced a second round of the “Comics in the Classroom” program, designed “to deepen a theme through a collection of comic strips.”

The initiative—nicely timed, as Italy’s Bologna Children’s Book Fair goes through its paces this week—provides this message to the news media, something certainly not heard in all the international markets of publishing: “Comics are now one of the major literary genres in France and around the world.”

For years, France has been moving ahead of many of her sister cultures in acceptance and interest levels for comics and graphic novels. 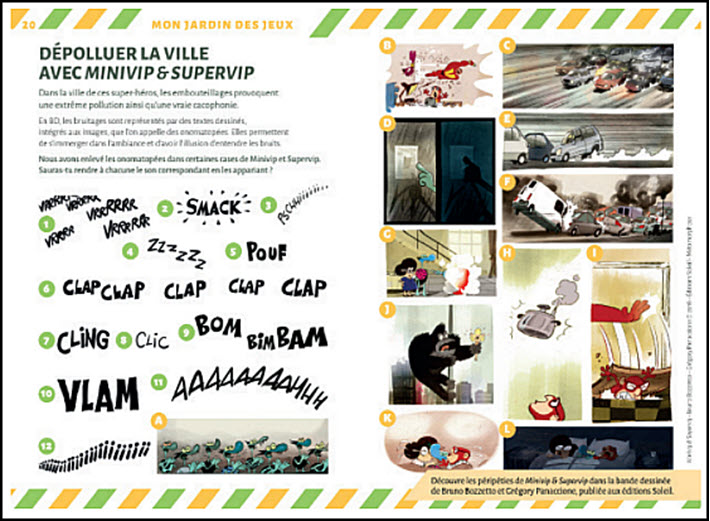 Pages from the student activities section of the ‘Comics in the Classroom’ curriculum. Image: SNE

So it is that the SNE’s comic book group has worked with Moïse Kissous (of the Steinkis Groupe) in the lead, to create 2020’s first iteration of the “Comics in the Classroom” project in 2020.

Initially, the focus, we’re told, was “the theme of monsters—as in dangers to the ecology and what’s needed for sustainable development.”

The project rolled out as “La BD en Classe” or “When Comics Come to the Classroom.” As many of our readers know, “BD” stands for bandes dessinées, the French term for comics.

The French publishers’ messaging goes on to develop its rationale, saying, “Because comics can play a major role in the artistic and cultural in the artistic and cultural education of children and are an educational medium in their own right, the
comic book group of the SNE launched ‘Comics in the Classroom,’ bringing together a teacher’s guide and a student’s notebook designed for all professionals working in the school environment.”

Those professionals, SNE says, include educators, chaperones, librarians and teachers.

The program is structured around small groups of three students each and supplies educational resources and excerpts from French and Belgian work, international comics, manga and more, “to articulate the pleasure of reading with the discovery of graphic literary works.” 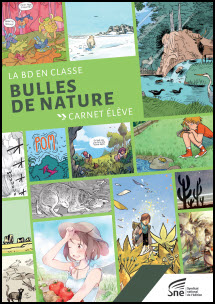 These curriculum pieces, the SNE says, were created by book and media pros.

The program is constructed, according to the SNE to promote “avenues for reading and reflection, keys to analyzing the codes of comics, the drawing of emotions, an insight into the literary genres present in comics (anticipation, science fiction), various activities such as creative workshops, team projects, and workshop debates are offered to teachers and students, so they can use comics as a support for image education, scientific education, and discussions on ethical and civic issues, such as sustainable development or acceptance and tolerance.”

You can download the student handbook to have a look at how the material is presented. It’s in PDF here.