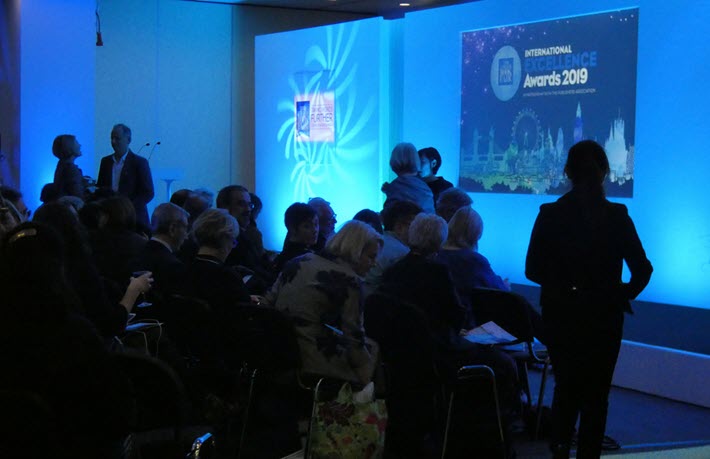 New This Year: A Children’s and YA Publishers Award

Organizers of London Book Fair (April 5 to 7) has announced the shortlists in the ninth edition of its International Excellence Awards this morning (March 4).

This year’s shortlistees represent 17 nations. Greece is appearing among them for a first time.

The Spanish market has the largest number of shortlistees (three categories), followed by the United States, Egypt, and France, each with two nominations.

Among the categories, a “Children’s and Young Adult Publishers Award” is new and likely to be warmly welcomed, in light of how prominent younger readers’ content is in the world industry.

Probably among the most watched is Audiobook Publisher, a shortlist that includes Copenhagen’s Saga Denmark as well as two of the world’s largest publishing-house-based audiobook producers, Penguin Random House Audio and Macmillan Audio, both in the United States.

In a comment on today’s release of the news, London Book Fair director Andy Ventris is quoted, saying, “The publishing industry has done remarkable work over the past year, managing to tell new stories and deliver books to readers in the face of COVID-19, supply chain issues and other notable challenges.

“The dedication and passion for books shown throughout the global trade is truly inspiring, and we’re delighted to recognize some of the most innovative companies, initiatives, and individuals from around the world in this year’s International Excellence Awards shortlists.

”We wish all our shortlistees the very best of luck, and look forward to announcing the winners of the International Excellence Awards at this year’s London Book Fair, as we come together in person to reconnect at Olympia London in April.”

This series of awards, as you’ll remember, annually recognizes eight categories of organizations and people from many parts of the world, all deemed to demonstrate “passion, creativity, and ingenuity” in various aspects of world publishing. Jury panels are drawn from specialists within each category. The winners are announced during the run of the trade show, with a precise date and time for this year’s event still to be publicized.

The Bookstore of the Year Award

Eligible for entries from the UK only:
Inclusivity in Publishing Award

Also to be announced at the event naming the winners of these awards will be the new laureate of the London Book Fair Lifetime Achievement Award.

This is Publishing Perspectives’ 42nd publishing awards and/or book awards report published in the 45 days since our 2022 operations began on January 3.

More from Publishing Perspectives on London Book Fair is here, more on world publishing’s book fair and trade show events is here, and more from us on publishing and book awards is here.