A dozen titles by writers 39 or younger comprise novels, poetry, and short stories, most from independent publishers this year. 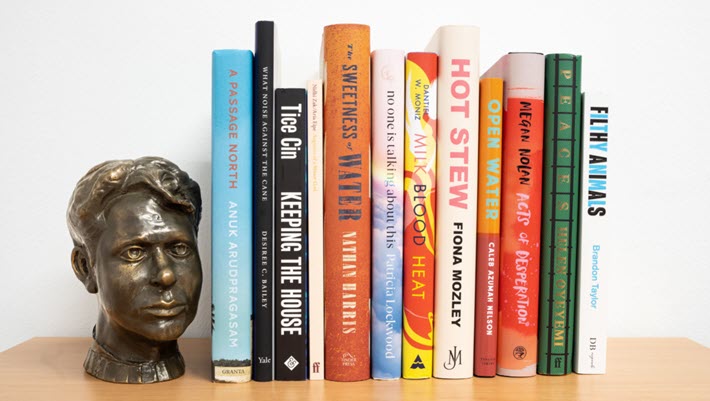 A Shortlist Is Scheduled for March 31

As the book publishing’s legions of awards programs continue to fire their year-opening salvos across the news-media terrain, the 2022 longlist has been released by the £20,000 (US$27,042) Dylan Thomas Prize for writers who are 39 or younger—the age at which the eponymous poet of Swansea died.

This program is based at Swansea University, as you’ll recall, and awarded £30,000 until 2021. In the competitive world of these contests, the Dylan Thomas’ program’s main competition for attention is London’s Young Writer of the Year program from the Sunday Times and the Charlotte Aitken Trust. That one awards £10,000 to its winner and its age cutoff is 35, four years earlier than the Dylan Thomas.

In Wales, the Dylan this year sports a smart deep-navy logo, a welcome escape from the cornea-searing magenta of before. Publicists are emphasizing the program’s internationalist quality, its longlist touting books by authors with backgrounds in United States, Ireland, Trinidad, Ghana, Nigeria, Sri Lanka, England, Scotland, and, happily, Wales herself.

There are eight novels, two volumes of poetry, and two story collections.

Independent publishers are looking good on the list, with two titles from Faber and Faber, one from James Daunt’s house, Daunt Publishing; one each from And Other Stories; Granta; Bloomsbury Circus; Yale University Press; and Atlantic Press. Two each come from divisions and/or imprints of Hachette Penguin Random House.

A shortlist is expected on March 31, with a winner’s ceremony that organizers hope to hold in Swansea on May 12, two days before the annual recognition of Dylan Thomas Day.

Prior to the award ceremony on May 12, an event with shortlisted authors is to be held at the British Library in London on May 12.