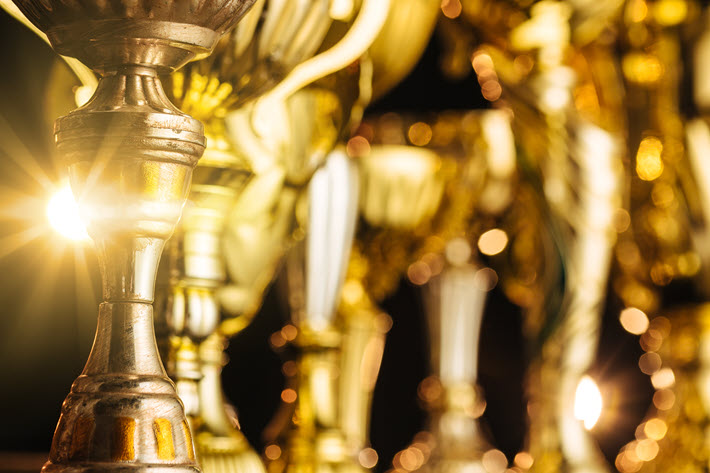 While vying for a British Book Award this year, Richard Charkin asks, ‘When will publishers’ egos be large enough?’

‘Every Year New Prizes Are Announced’

One of the many dangers of getting older is becoming cynical at the expense of enjoying good fortune.

I used to attend publishing awards ceremonies, togged up in black tie formality, rolling up to a posh West End hotel in a taxi alongside colleagues to enjoy an expenses-paid dinner and the chance of winning a gong or two for an author, for an individual, or for the imprint or company as a whole. There would be disappointments, successes, much hugging, much false (or not so false) modesty, discussion about the merits of the judges, their choices, or the benefits of winning.

I don’t want to fall into the elderly bloke trap but I’m becoming less excited as the years pass, to the extent that I try to avoid these occasions as much as I can. At many of them, the hotel meal is pretty mediocre, the wine is overpriced, the decorations are usually tawdry, and the videos excruciatingly long and dull. They’re a fundamentally poor version of the Oscars without the glamour or the stars.

This feeling first crept up on me when I attended one of these events shortly after I joined Bloomsbury Publishing. With much acclaim and unsurprisingly, the author of the year award was won by the nonpareil JK Rowling, seated at our (expensive) table. She seemed to be pleased and so were we.

It was the following day I received a letter from the organizers congratulating us—why us? it was the author who won—and sharing the good news and invoice that we owed them £25,000 [US$33,879] for the honor of winning. The money would go toward promoting the author, as if this author needed more promotion. I asked the organizers if in the future they could guarantee that we’d never win again, as we had better ways of spending money. I also wonder—doubt—whether the rather tasteless award trophy sits on the author’s favorite mantelpiece.

Nonetheless, I found myself submitting an entry for this year’s British Book Awards on behalf of Mensch Publishing for the Small Publisher of the Year award. I reckon I might be in with a chance of being one of the smallest publishers, if not one of the best. If by a miracle I were to be shortlisted, would I go the awards ceremony and put myself through that hell all again? Probably.

All this made me think of inflation.

Inflation was constant concern for British publishers in the 1970s and 1980s when input costs—materials, wages etc.—rose faster than prices. It was a 10-year or longer battle to bring it down to a sustainable level. It is reappearing.

We all know about the actual or impending financial inflation which governments around the world are bestowing in the vain hope that they can pay for the pandemic by impoverishing their unsuspecting populations. Already we’re suffering in raw material and energy, and seeing the early signs of wage inflation.

In our industry, we’ve also witnessed job-title inflation. Managers—and even secretaries in the case of university presses and industry bodies—have become managing directors and then chief executives with little or no change in their responsibilities. Editors have become editorial directors, then publishing directors and then the ultimate editors-in-chief when they can no longer bother with the ennui of management.

As if that weren’t enough inflation, it has now beset the world of prizes and awards for books and book-related activities.

For authors, there used to be the Booker Prize for Fiction, the Nobel Prize, of course, the National Book Award, the Cervantes Prize and Premio Planeta in the Spanish language, and similar in most languages and countries. Inflation seems to be highest in English, in which language there is a shortlist, longlist, victory parade for one prize or another. I’ve counted up to 50 such prizes.

There’s little published information about the impact that winning these prizes has on sales apart from the Booker, which definitely enhances sales. For the rest, of course, winning is a good thing but does it really ignite sales? And every year, new prizes are announced, competing with the existing ones for attention and diluting the impact of prize-winning. These prizes don’t even seem to coordinate the timing of their announcements. There seems to be no end to this “litflation.”

More debatable still is the inflation of industry awards, themselves.

There are 17 British Book Awards this year, in addition to the awards for individual books and authors.  Of course, award organizers welcome the increase in awards. It guarantees more submissions and thus more companies paying for tables and, with luck, spending money to advertise their successes.

While there might be debate as to whether authors’ book prizes have any impact on sales, there can surely be little argument about the impact of book trade awards—zero in commercial terms.

The only impact seems to be to inflate—more inflation—the egos of recipients. When will this inflation ever end? When will publishers’ egos be large enough? When will we spend as much time and effort supporting our authors, particularly when they’re under attack, as we spend on parading against our peers and competitors?

So back to my quandary at the beginning.

Am I too old to enjoy and celebrate success? Or is it that the success in the case of author prizes has lost its bite? And in the case of book-trade prizes, have we realized their fundamental meaninglessness?

Enough of that. I hope Mensch Publishing wins a British Book Award on May 23 against all the odds and that I’ll have to recant everything I’ve just written.

Join us monthly for Richard Charkin’s latest column. More coverage of his work from Publishing Perspectives is here, and more from us on publishing and book awards is here.