‘The buzz and energy’ of Bologna Children’s Book Fair, Elena Pasoli says, is powered by publishers’ confirmations from 50 nations. 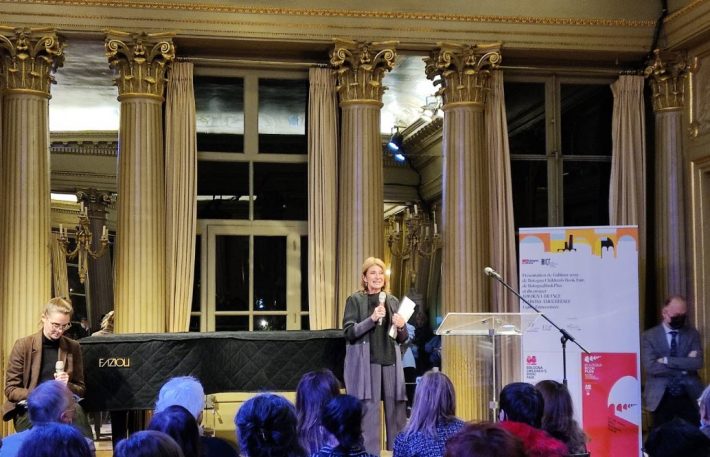 “Connections that were not there before”: Presenting the plan for this year’s Bologna Children’s Book Fair at l’Institut culturel italien de Paris, the Italian Cultural Institute, in the French capital, November 30, 2021. Image: BCBF

Pasoli: ‘This Year, Next Year, and Beyond’

Having become the first major international publishing trade show to produce a digital evocation of itself in 2020, Bologna Children’s Book Fair (March 21 to 24) in the third year of the coronavirus COVID-19 pandemic is preparing to find its footing again as a physical, in-person event.

A chance to have an exchange with Elena Pasoli, the director of the show, finds her trademark cheer in place: “We’re feeling quite optimistic,” she says. “We’re really pleased to have publishers from more than 50 countries, which is far more than we might have expected.”

Pasoli is a hardy soul, one of those folks who keeps the unavoidable exhaustion of her work out of sight. She wears the strain well, a smile always in place before she speaks, though you know the pile of to-do notes on her desk is growing as she closes in on a month to fair time.

Anyone who worked on Frankfurter Buchmesse‘s return to the exhibition halls of Messe Frankfurt in October—after just a single year of all-digital presentation—can tell you that the effort to re-concretize one of these massive, complex, programming-heavy shows with so many classifications of stakeholders is immense.

“Every encounter, whether scheduled or by chance, is likely to be so welcome after the book-fair drought we’ve all lived through.”Elena Pasoli

Bologna is becoming the first do this after two pandemic years in the digital parallel universe of Zooming conferences and “platformed” trading. And Frankfurt and Bologna share a crucial attribute: each trade show is, in its field, the largest in the world—Bologna in young people’s literature and Frankfurt in the broader world industry.

In a typical non-pandemic year, Bologna can expect to draw at least 30,000 internationally active professionals to the sprawling BolognaFiere exhibition complex Emilia Romagna—the Italian region that became one of the hardest hit COVID hotspots in all of Europe in 2020.

This makes it all the more remarkable that in that year fateful year—before vaccines were available and about two hours from the medical epicenter at Bergamo—the interpretation of Bologna Children’s Book Fair drew some 60,000 people to its online offering. And a year later, in 2021, the digital attendance figures jumped to 75,000 unique users.

In neither case was the effect fully satisfying, of course, no more so than it has been for any of these great gatherings forced into cyber-exile. One of the biggest problems for many shows has been “schedule creep,” in which programming spreads across more than a week, demanding protracted returns to the screen for digital events. And yet those numbers are something to be proud of.

In 2021, at the heart of the pandemic malaise, Bologna introduced the new Bologna Book Plus program under Jacks Thomas‘ direction. Still working to shape and evolve its entire mission, that track of events this year includes training as well as conference work, and not all of it focused on children’s and youth industry.

More numbers from the 2021 online Bologna:

These are accomplishments that, however proud, now must find a spot on the shelf as the demands of genuine footfall approach. And it’s a time when everyone has questions for which—even in what appears to be the retreat of the omicron variant—the contagion allows few dependable answers.

‘Both Instructive and Challenging’ 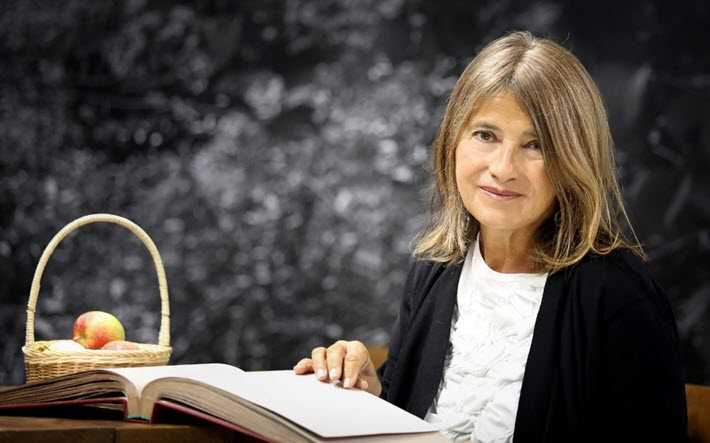 Pasoli is especially glad, she says, to see “the traditional Bologna Licensing Trade Fair and the brand new Bologna Book Plus shaping up well, and interest is still coming in,” she says.

“In terms of that 50-nation spread of confirmations, “Europe, along with the United Kingdom and Russia, are represented pretty comprehensively,” she says. “We’re also welcoming exhibitors  from all other continents. Publishers are registered from Turkey, India, South Korea, Taiwan, Singapore, Iran, Australia, New Zealand, Canada, the USA, Brazil, Chile, Uruguay, Mexico, Egypt, and the UAE.

During the pandemic, “We’ve all become more aware of so many issues which we’ve discussed in meetings with people on the other side of the world. We’ve made connections that weren’t there before.”Elena Pasoli

“With so much continuing interest, I can honestly say that the industry’s response has been—and is—amazing.”

An upbeat report is moving on the wires from the Italian news service ANSA today (February 17), announcing that between February 9 and 15, Italy’s new COVID-19 case counts dropped by 32.2 percent over the previous week, according to figures from the GIMBE medical foundation. This is a third consecutive week of falling case counts, although health authorities caution that there’s been a drop in testing, as well, and that viral circulation levels “remain high.”

“We’ve been working on safety measures for some time,” Pasoli says, “and we’ve drawn on a lot of experience available across BolognaFiere. This is in addition, of course, to learning by attending other events and talking to book-industry colleagues. What’s more, the ‘Bologna Grand Tour‘ that we undertook last year was both instructive and challenging.”

Those who are registered will have received an email, “Importanti informazioni per accedere in fiera” with some initial guidance on COVID-19 regulations of the kind that those who have become experienced pandemic-era travelers know can undergo changes along the way. Europeans will want to see the “super green pass” news posted to the fair’s site on February 14.

“Importantly,” she says, “new measures make it easier for those international travelers with vaccination certificates for vaccines not recognized by the EMA [European Medicines Agency] to enter the exhibition. ”

She cautions, however, that the main advice she wants to put across in terms of COVID factors has to do with staying alert: “For entry into Italy,” she says, “please refer to your local Italian Embassy site as visitors are advised to consult the specific travel and health certificate requirements applicable to each country.”

And in terms of crowd size the Fiere will be permitted to accept, “The number of visitors at a professional trade fair like ours,” she says, “is lower than at B2C fairs, so I can certainly say that we’ll be able to accommodate all visitors who want to visit the fair.” 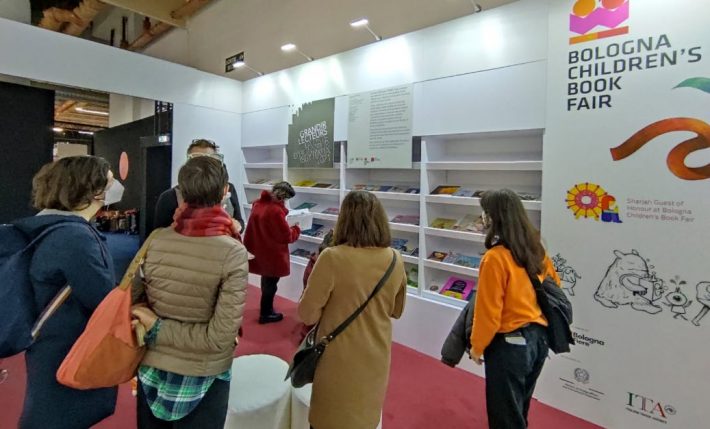 Pasoli is aware that “Everyone is certainly going to want to talk and catch up with each other more than ever this year,” something that made many who were at Frankfurt in October glad to find a less frenetic schedule of events in place.

“I greatly enjoyed having the opportunity to catch up at Frankfurt,” she says. “Clearly the business of rights trading, finding the next new thing, and refreshing one’s network are at the heart of book fairs, all taking place within the buzz and energy of a wider book fair program. We can’t wait to stage this year’s event as every encounter, whether scheduled or by chance, is likely to be so welcome after the book-fair drought we’ve all lived through.”

Pasoli talks of the long delayed guest-of-honor turn for Sharjah having produced “a warm, amazing, fruitful, friendly relationship. Bodour Al Qasimi, [a Sharjah publisher and current president of the International Publishers Association] is one of the smartest and most brilliant children’s publishers on the international stage. She’s won many awards in Bologna, and for me any single conversation I have with her represents a wealth of ideas.

“And then Ahmed Al Ameri and his team” at the Sharjah Book Authority: “What can I say? They are real friends of Bologna. Their professionalism, their activism, their forward-looking gaze combine perfectly to our own style of working and playing in the publishing world.”

As it turns out, Sharjah Book Authority’s team has just visited Bologna, she says, for advance planning sessions with the fair’s leadership. “They’re going to offer Bologna an exciting program of activities, both at the fair and in the city,” Pasoli says.

Below is a video produced ahead of the coming Guest of Honor Sharjah program at Bologna.

Of all the Bologna fair is pulling together as it reconstitutes itself for its first time in three years back in full stride, Pasoli says she’s most proud of the chance to produce “with Jacks Thomas the first in-person edition of Bologna Book Plus. We started planning this new extension of Bologna Book Fair’s activity in the middle of the first—and very tough—lockdown. At that time, and along with much of the world, the  thinking was that it would be the one-and-only lockdown. So you can imagine,” she says, “that it was a bit frustrating to get started with a brand new project solely online.

“But we did it. It’s my great good fortune to work together with Jacks, sharing ideas and making plans. We have quite a similar view and we don’t give up on projects we believe in. The BBP ‘soft launch’ was good, the industry’s response fascinating, and eventually, here we are. I’m very proud of it and excited as well.

“Beside this,” Pasoli says, “I’m delighted to present the first Spotlight on Africa, conceived together with Bodour and her wonderful team. For me it’s a dream coming true. I’ve been thinking of exploring the African publishing world for so long that now I can’t wait to open that space.”

The biggest challenge ahead, she says has to do with capitalizing in the physical space on the sort of reach that digital programming has made possible during the pandemic.

“Publishers did very well during the pandemic,” Pasoli says, “and together with the different players in the book game, they were open to, and experienced, new approaches, new ways of communicating about their books, new and more effective collaborations with booksellers and librarians, as well as teachers and educators.

“I think that what’s most important now is to build on the experience and continue innovating. We’ve all become more aware of so many issues, from accessibility to sustainability and so much more, which we’ve discussed and explored together in endless—often tiring but often productive—meetings with people on the other side of the world. We’ve made connections that weren’t there before.

“I’m enthusiastic about the Inspire project from the IPA. It really proposes a new global approach, one that seems totally in keeping with the contemporary world.

“And my final thoughts are thanks to those who are participating, but also I think of those who are still living with travel restrictions. Keep safe and well and be assured that Bologna is waiting to welcome everyone warmly this year, next year and beyond.”

Above are creatures (finished on top, sketched below) developed for Bologna Children’s Book Fair 2022 by the Mexican illustrator Sólin Sekkur. He’s been selected in the trade show’s BCBF Visual Identity Workshop to provide this year’s visual identity–the look and feel of the show. You can learn more about the workshop process, about Sekkur’s background, and about these characters (each has a name and personality) here in a ‘Backstage’ feature.