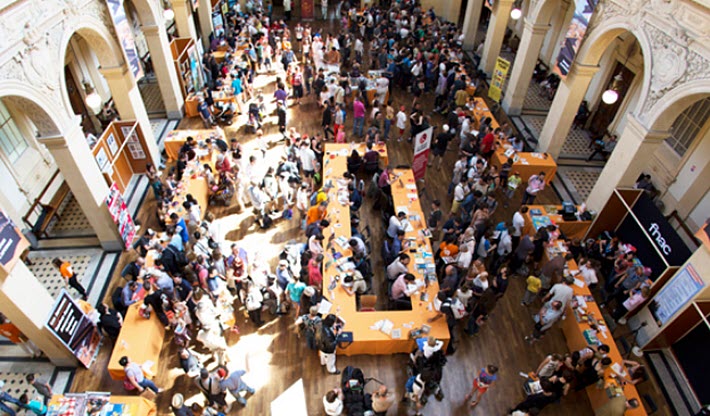 Set for June 12 and 13 in a fully physical format, the 17th Lyons BD Festival has an especially strong international program planned.

As the 2022 international book and publishing fair and festival outlook gains more focus, the Lyons BD Festival—BD for bande dessinée—tells us today (February 4) that it will stage its 17th iteration on June 12 and 13 in physical format.

This follows news that the best-known of the comics/graphic-novel events in France, the Angoulême Festival—which was to have been staged January 27 to 30—is being postponed to March 27 to 30.

There are subtle signals of wariness here in Lyon’s report, of course, as international health authorities try to assess progress in vaccination regimes and potential new-variant outbreak scenarios in the ongoing coronavirus COVID-19 pandemic.

Media messaging from Lyons this morning reads, in part, emphasis ours, “The 2022 edition offers a complete and eventful program without, we hope, the constraints imposed by the previous year. About 50 authors from [many parts of] the world will be present to let the public discover their worlds. Artists and professionals from the cultural and creative industries will also boost the festival through meetings, drawing concerts, workshops, round tables and other formats.

“Moreover, the entire month of June will be dedicated to comics all over Lyon and surroundings in more than 80 partner venues.” 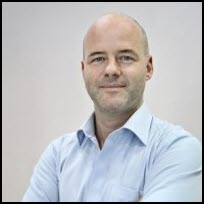 In a note, the Lyons BD Festival director Nicolas Piccato writes, “More than ever, the diversity of styles and themes will make the festival shine with original exhibitions and surprising guests, in the magnificent setting of the city of Lyon, of course.

“We all missed being together and Lyon BD Festival will be the time for reunion, gathering authors, professionals of the graphic novel, and audiences of all ages, and also gathering comic art together with other arts and forms of expression: music, video games, performing arts.

“We invite you throughout the month of June to Lyon and surroundings to celebrate the ninth art and, of course, to join the big family of the Lyon BD Festival on the second weekend of June.”

Piccato’s reference to a “ninth art,” in case you’re not familiar with it, has to do with the illustrative medium’s position as a serious creative form, particularly in how it’s regarded  in France and Belgium, as opposed to the more lightly described “comics” of other cultures’ terminology.

At a past iteration of Lyons BD Festival. Image: Lyons BD

The Lyons program is expected to emphasize more internationalist intent this year than it may have offered in the past.

Portugal, which also is featured at the now-physically planned evocation of the Leipzig Book Fair, is to send some of its emerging authors to Lyons. A group of Myanmar artists working on a project that reflects the Yangon coup of 2021 is to be on-hand in France. An exhibition of Canadian comics art from Québec is anticipated, as is the engagement of Korean and Japanese publishers and artists. 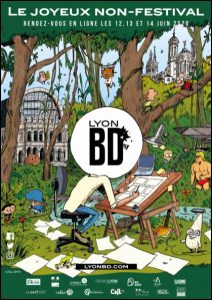 Some of the partner venues involved in the Lyons staging are the Hôtel de Ville, the Théâtre Comédie Odéon, the Théâtre des Célestins, the Galerie des Terreaux and the FNAC Bellecour.

And it’s interesting to note that Lyons is not right out of the box with this year’s plans. The show actually staged an in-person effort in 2021, spreading its events between June 1 and 30, and seeing as many as 70,000 visitors during that month for its 16th outing.

In 2020, by contrast, the show presented a digital evocation of its interests, with the phrase, “Happy Un-Festival”

As we have previously reported, France’s  Festival du Livre de Paris (previously known as the Salon du Livre Paris) is scheduled now for April 22 to 24 in Paris’ Grand Palais Ephémère. 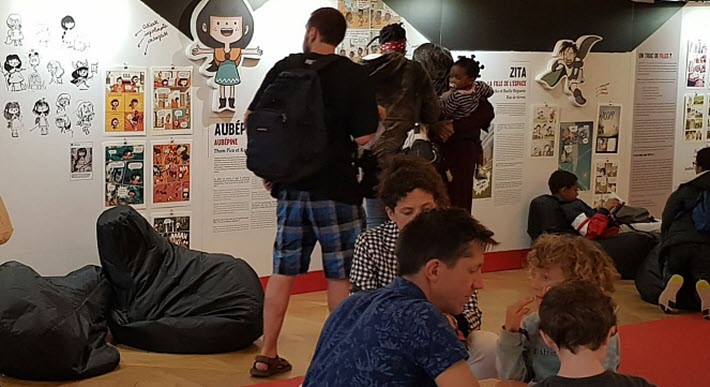 At an exhibition at Lyons BD Festival. Image: Lyons BD

Reuters Paris is reporting that its vaccine pass “will remain in place until hospitals are able to function normally without canceling non-emergency procedures to make room for COVID patients in intensive care,” according to the health minister, Olivier Veran, on Wednesday (February 2). “Since mid-January, people in France have had to show proof of vaccination to enter bars, restaurants, cinemas and other public places. Previously, there had also been the option of showing a negative COVID test or proof of recent infection.”

In a later report from Reuters’ feed, we read, “The health ministry registered 274,352 new infections on Thursday [February 3], pushing the total to 20.15 million. The cumulative death toll is nearly 132,000.

“Some 54 million of France’s more than 67 million citizens have now received at least one vaccination jab.”

Those 28-day rolling case figures place France at second in the world to the United States for its pandemic numbers. 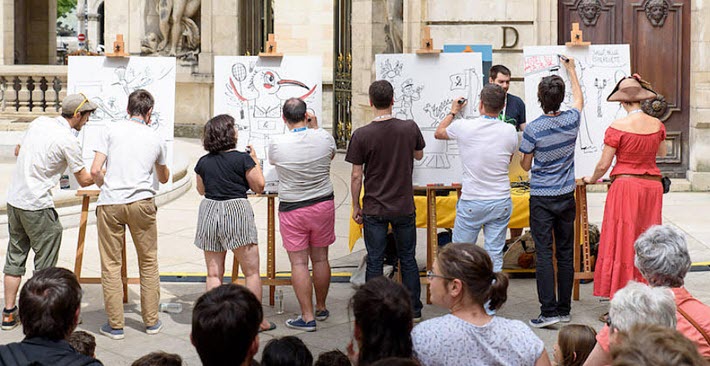 More from Publishing Perspectives on the French market is here, more on book fairs is here, and more on comics and graphic novels is here.