‘Frankfurter Buchmesse has maintained close relationships with publishers, authors, and industry-related institutions in Ukraine for many years,’ says Juergen Boos.

In commentary provided to the news media including our colleagues at the Börsenblatt this morning (February 24), Frankfurter Buchmesse‘s chief players, led by president and CEO Juergen Boos, have written a group message on the overnight start of the Russian invasion of Ukraine.

“It was with great dismay,” the statement reads, “that colleagues at Frankfurt Book Fair learned of Russia’s attack on Ukraine today. With Kyiv, Lviv, and Kharkiv, the most important book and publishing centers in Ukraine are directly affected. The oldest book fair in Ukraine takes place in Lviv.

“Frankfurter Buchmesse has maintained close relationships with publishers, authors, and industry-related institutions in Ukraine for many years and has participated in numerous trade fairs in recent years, in cooperation with the local Goethe-Institut Ukraine and the Arsenal Book Festival, with the financial support of the federal foreign office, publisher training and specialist programs.

“A summer academy for Ukrainian publishers is also planned for 2022.

“Ukrainian publishers are also becoming more and more active in the international book trade, presenting themselves at Frankfurt Book Fair with a modern and attractive stand and an extensive supporting program. In 2019, more than 30 co-exhibitors were represented at the Ukrainian joint stand.

“According to statistics from the Börsenverein des Deutschen Buchhandels, around 250 translation licenses for translation into Ukrainian of German writings have been issued in the last three years (2018-2020). These figures demonstrate Ukraine’s strong interest in German nonfiction and contemporary literature and in international exchange.

“Our thoughts are with our colleagues in Ukraine. We all hope they survive the attacks unscathed.”

That message is signed by Boos, Vladka Kupska, Dieter Schmidt, Niki Théron, Tobias Voss “on behalf of all colleagues at Frankfurter Buchmesse.”

The Ukrainian Book Market and Frankfurt 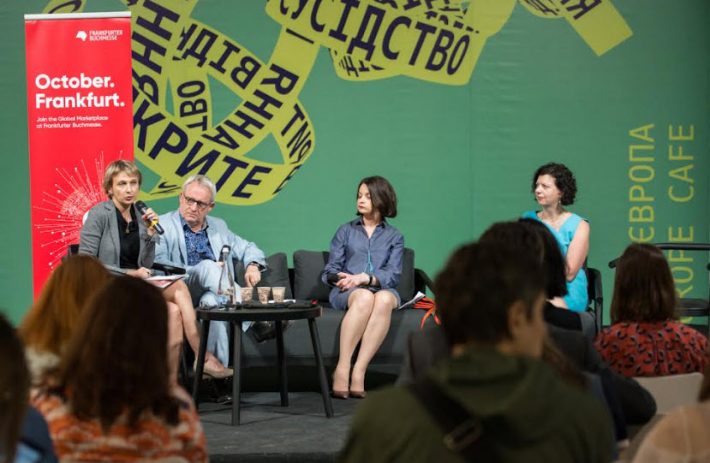 A session on Ukrainian literature and publishing supported by Frankfurter Buchmesse at the 2021 Book Arsenal Festival at Kyiv’s Mystetskyi. Image: FBM

With the assistance of our colleagues in Frankfurt, we can report that the Ukrainian Book Institute was launched in 2017 as a means to help design and implement state support for the book industry including publishers, libraries, and translators.

The book fair called the Book Arsenal Festival has been staged each May at the Mystetskyi Arsenal, a cultural center in Kyiv, since 2011. The show draws more than 50,000 visitors each year, with more than 200 national and international exhibitors, amid at least 40o events and close to 300 authors participating.

A new “Translate Ukraine” grant program supporting translation was opened in the spring of 2020, providing timely assistance during the initial onslaught of the coronavirus COVID-19 pandemic.

In 2020 and 2021, Frankfurter Buchmesse organized digital-specialist programs with participants from Ukraine, Georgia, and other countries in Central and Eastern Europe in cooperation with the Goethe-Institut in Kyiv, the German Embassy, and the Arsenal Book Festival.

In 2021, the Frankfurt Book Fair provided its book exhibition for the Goethe-Institut’s physical participation at the Arsenal show. Additionally, Frankfurt has participated with a collective stand and associated programming at the Arsenal festival in 2016, 2018, and 2019, reportedly finding robust public interest and encouraging new interactions between the German and Ukrainian book industries.

As part of the Eastern Partnership, the Frankfurt Book Fair also held several days of publisher workshops in Kyiv in 2016 and 2017 with participants from Ukraine and Central East European countries.

More from Publishing Perspectives on the German market and the Börsenverein is here, and more on Frankfurter Buchmesse is here.