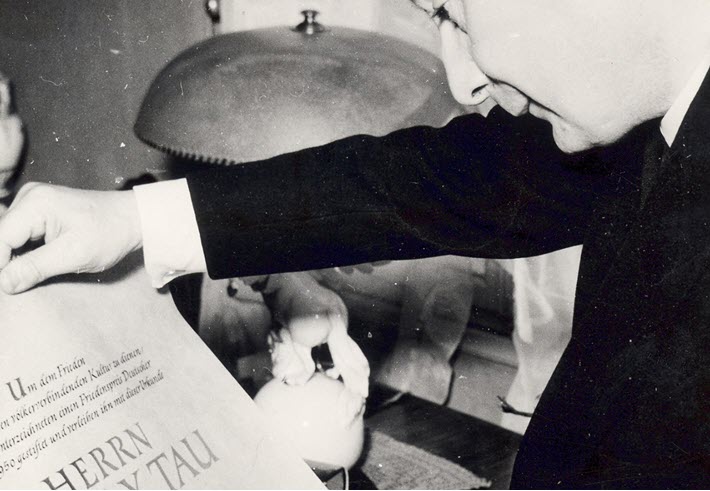 Detail from an archival photo released by the Peace Prize of the German Book Trade this month to commemorate the 125th birthday (January 19) of Max Tau, who was the first recipient of the honor. The ceremony, on June 3, 1950, was held in the home of a wine merchant in Alsterdorf near Hamburg. Image: Börsenverein des Deutschen Buchhandels, Friedenspreisarchiv

As many publishing and book awards programs are doing this week, the Peace Prize of the German Book Trade 2022 is opening up for submissions.

The Peace Prize has been awarded by the board of the Börsenverein des Deutschen Buchhandels, Germany’s publishers and booksellers association, since 1950 and is endowed with a purse of €25,000 (US$28,660). The honor’s key criterion is “an important contribution to peace, humanity, and understanding among peoples.”

As Publishing Perspectives readers will recall, the prize is annually conferred on its winner(s) at the end of Frankfurter Buchmesse in October at Paulskirche (St. Paul’s Church) in Frankfurt.  The Zimbabwean author and filmmaker Tsitsi Dangarembga was the winner of the 2021 prize, and you can see a retrospective on all the program’s winners here.

The speech honoring Dangarembga was given by the Kenyan sociologist and German Studies scholar Auma Obama.

In this 72nd year of the prize’s operation, organizers are remembering that in his acceptance speech on June 3, 1950, the first recipient of the prize—the German-Norwegian publisher, editor, and writer Max Tau—said, “Man has become lonely. He can make all the technical connections in an instant, but the only connection that is indispensable to him, the connection to humans, has been broken.

“The mechanized world complicates what the human demands. You can only grow into people. Whoever wants peace must first create peace within himself.”

You can listen to Tau’s acceptance speech, and read the jury’s rationale for his selection here.

The annual winner of the honor is described by the program as “a personality who has made an outstanding contribution to the realization of the idea of ​​peace, primarily through his or her work in the fields of literature, science or art.”

Proposals with details of a candidate’s achievements and publications can be submitted online here, as well as by email or by post.

Self-nominations are not accepted.

By email, nominations should go to m.schult@boev.de

In the spring, the foundation board of the Peace Prize will select this year’s winner from the proposals.

The board’s decision will be announced in June, and the award ceremony this year is set to be held on take place on October 23, again at the end of the Frankfurt Book Fair and in Frankfurt’s Paulskirche. 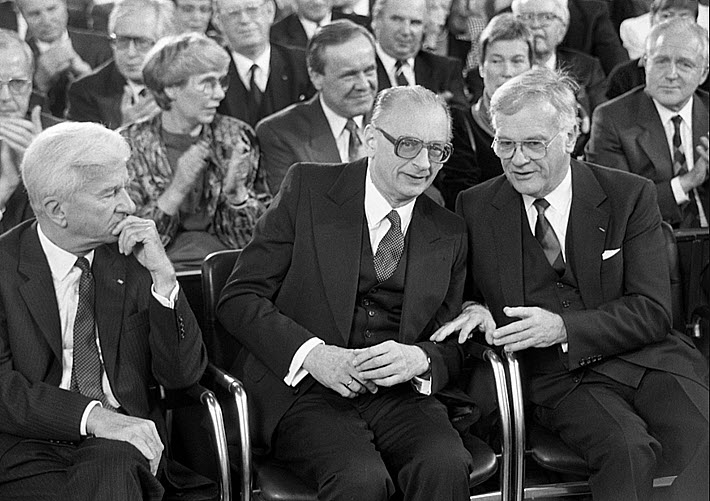 Another ‘Picture of the Month’ just released to the news media by the Peace Prize of the German Book Trade shows the Polish historian, publicist, and politician Władysław Bartoszewski, the 1986 winner of the award. In this image, he’s seated between Günter Christansen, chairman of the Exchange Association, and federal president Richard von Weizsäcker at the Paulskirche award ceremony. Bartoszewski’s 100th birthday is on February 19. Image: Börsenverein des Deutschen Buchhandels, Werner Gabriel