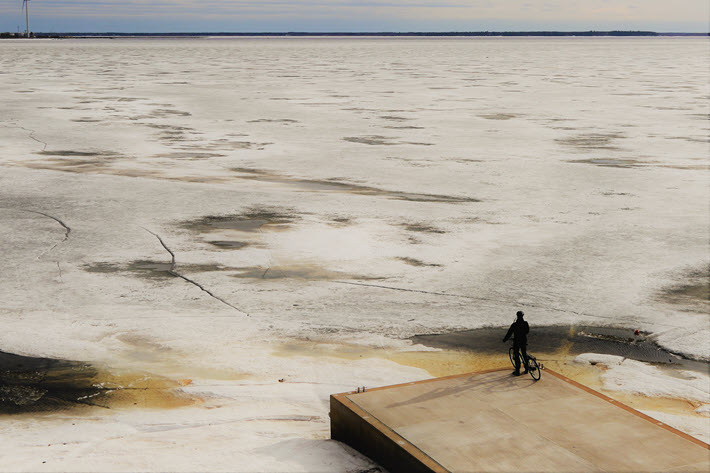 A cyclist looks at springtime ice in the Gulf of Bothnia at Oulu, about 100 miles from the Arctic Circle, May 1, 2018. Image – Getty iStockphoto: Aki Kipinä

The literary agent Urtė Liepuoniūtė at Helsinki Literary Agency last year alerted us to a “black hole” of a kind more promising than they usually seem.

Black Hole: Books Meets Rights is the name of the Oulu Writers Association‘s second annual rights-focused digital conference and one-on-one trading sessions. This year it’s set for February 11 and 12. And while it was entirely online last year (snow-free, after all), this year, a limited number of people may be able to participate in person in cultural programming set in the northern Finnish seaport of Oulu, which is Finland’s fifth most populous urban hub after Helsinki, Espoo, Tampere, and Vantaa. It’s been selected as Europe’s Capital of Culture for 2026.

The digital platform will again be Brella.io, and the organizers were pleasantly surprised last year, they say, to find participants from 19 countries engaging with the effort on its first outing.

This year, the speakers include:

The Oulu writers’ organization is made up of professionals who founded their association in 2010 at the Oulu House of Literature and featured in a magazine called Stiiknafuulia.

Pre-registration is here, and we’ll give you some of the high points of the program below.

The event is made possible by the financial support of the Council of Oulu Region and the City of Oulu. Partners include the Finnish Literature Exchange FILI; Helsinki Literary Agency; and
Arts Promotion Center Finland.

More from Publishing Perspectives on the Finnish market is here, more on rights is here, and more on the ‘digital acceleration’ observed in world publishing’s pandemic years is here.