Print book sales by volume in the United States was the highest ever recorded by NPD, with adult fiction as the leading growth category. 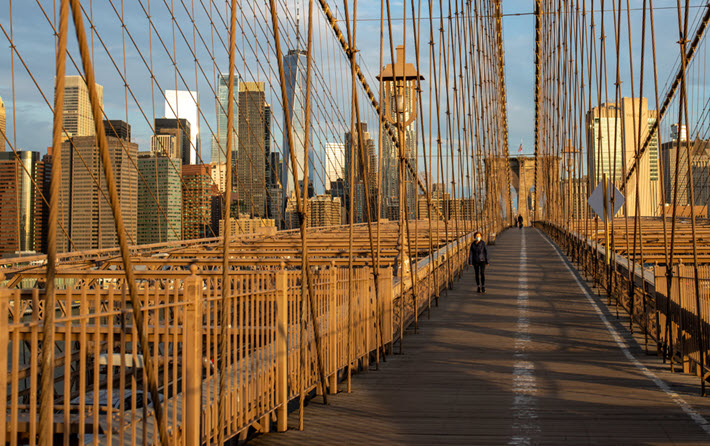 Adult Fiction In the Lead: Up by 14 Million Units

In its 2021-concluding statement today (January 10), NPD BookScan‘s Kristen McLean writes that annual print books volume in the United States reached 825.7 million units, up 9 percent or 67.8 million units over those numbers in 2020.

Print volume in 2021 “was the highest ever seen in NPD BookScan,” McLean reports, “going back to the start of data tracking in 2004.” This was the first time, she reports, that annual volume rose above 800 million units.

Total adult print book sales grew 11 percent over those of 2020, and adult fiction was the leading growth area in 2021.

“Adult fiction experienced the highest absolute unit gains of any super-category for the year,” she writes, “and contributed to more than half of total market gains, with 174 million units sold, 35 million more units than were sold in 2020.”

In NPD’s research, the top adult categories for growth in 2021 were graphic novels, general fiction, romance, religion, and business. 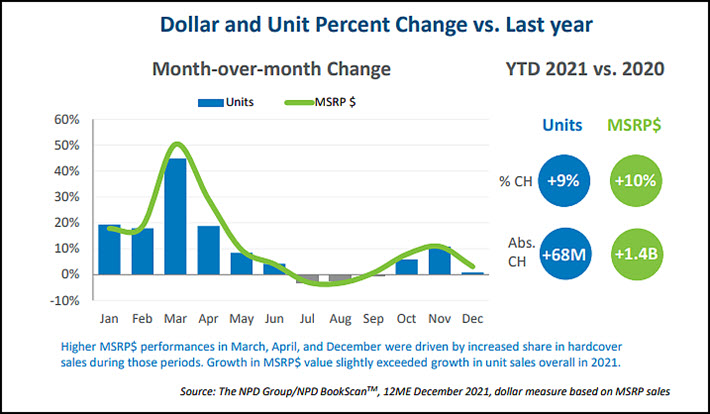 There may be a surprise for some in the fact that NPD charted the children’s nonfiction super-category posting a decline: at 73 million in annual volume, it was down 5 million units over those numbers in 2020. Children’s nonfiction in recent years has been anticipated by many observers to show strong growth potential. The step-back of 5 million units isn’t huge but might temper some expectations, adding nuance to the outlook.

As can be seen in the chart above, fourth-quarter performance in the US market in 2021 surpassed that of both 2020 and 2019, with early buying playing into the results.

McLean reports that the American book market in 2021 was consistent with trends in the broader discretionary retail market (NPD being a research company that covers a vast array of the market, far beyond books and publishing).

“Seasonal buying started early,” in part spurred by supply-chain concerns and the industry’s warnings to consumers to move quickly, “and price and availability didn’t dampen consumer spending, despite concerns,” McLean points out.

As is highlighted in the graphic below, the full-year 2021 figures show dollar sales 15 percent above 2020 sales. And what was behind that gain was higher average prices, higher costs of goods being passed on to the consumer. 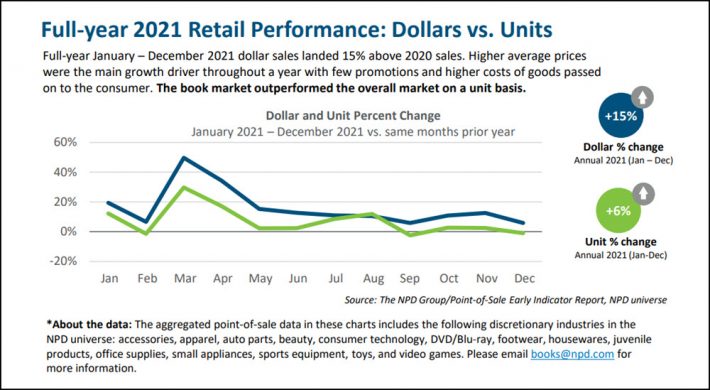 First, she anticipates that sales will remain strong in the United States, but they’ll fall below 2021 levels revealed in this report.

“US books sales in 2021 were what analysts call a “plus-plus,” she writes, meaning “a growth year stacked on top of a growth year. The market finished the year 19 percent ahead of 2019 on a unit basis. The factors driving that amazing performance, such as pre-vaccination stay-at-home orders, the child tax credit, and more mental space following a contentious election, will not be with us in the same way in 2022.

“Sales won’t fall off a cliff,” she predicts, “but prepare for negative comps.”

“Although sales are likely to soften, consumers will continue to return to stores as the coronavirus COVID-19 pandemic transitions to a “living with COVID” reality. And after nearly two years of pandemic experimentation and implementation, physical book retailers are institutionalizing the best of what’s been working. From rebranding and re-merchandising efforts, to community-building strategies and aggressive promotional campaigns, some retailers are really going to nail it, and physical bookselling will grow share overall in 2022. ”

Third, NFTs and other digital innovations will pick up speed, according to McLean.

“The book market grows,” she writes, “when new technology arrives, and generally that growth is additive.

“From limited collectible editions to multimedia bundles, limited drop-editions from authors to fans, and enhanced ebook and audiobook programs in which publishers continue to track ownership and receive incremental revenue, the possibilities are tantalizing. This should be a topic of conversation in strategic planning discussions.” 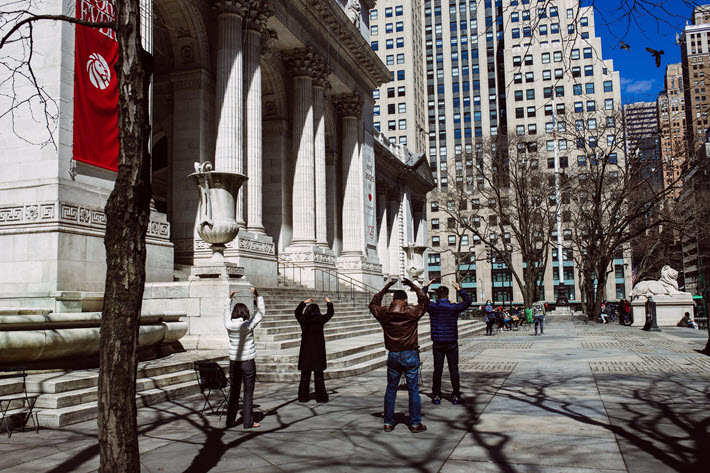 More on the United States market is here, more on the NPD Group’s reports is here, and more from Publishing Perspectives on industry statistics is here.