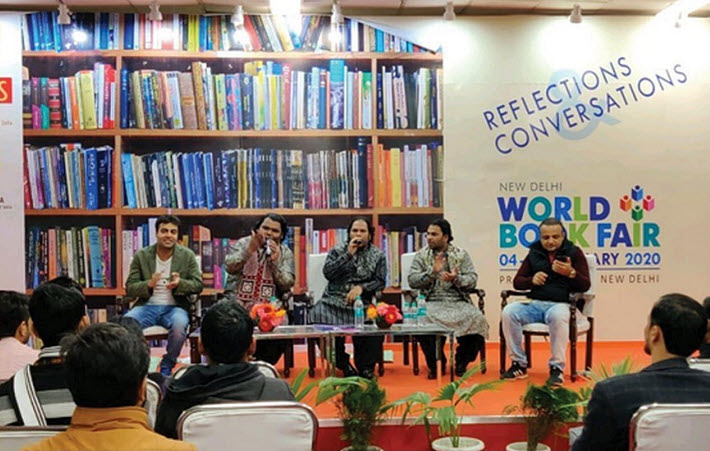 Three days before its anticipated physical opening, the big New Delhi World Book Fair has been postponed, new dates to be announced. 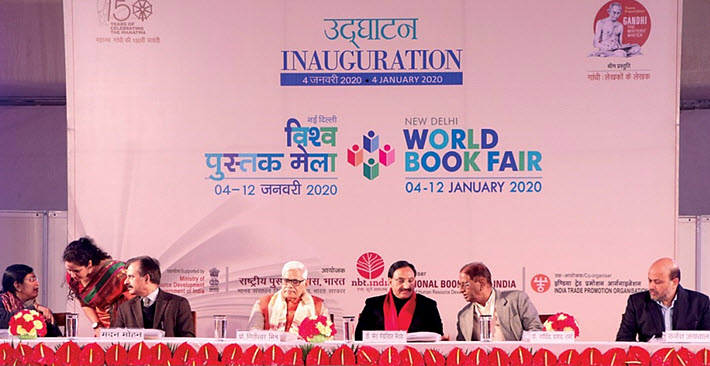 At the opening ceremony of the 2020 New Delhi World Book Fair. The 2021 event was held in digital format. Image: National Book Trust

In its 30th iteration—held across 49 years since its inception—the fair was scheduled to open Saturday, running January 8 to 16 at the cavernous Pragati Maidan’s International Exhibition Centre. Its theme this year, Azadi Ka Amrit Mahtosava (roughly, “Festival of Freedom”), refers to India’s observance of its 75 years of independence. Frankfurter Buchmesse goers will remember seeing this theme used by the Indian delegation last October with a collective stand displaying 200 titles from 25 Indian publishers.

While reports of physical-event attendance figures in recent years are inconclusive, the annual turnout runs near 1 million people. The 2018 fair is said to have seen 1.2 million attendees. The show is co-organized by the National Book Trust with the Indian ministry of commerce’s India Trade Promotion Organization.

No notice appears to have been posted on the fair’s site at this writing, but the National Book Trust tweeted out its brief news alert today (January 5) in English and in Hindi, announcing that the Delhi Disaster Management Authority’s level of coronavirus COVID-19 pandemic alert and “requests made by various stakeholders and visitors” had prompted a postponement of the event, with new dates to be provided later.

In view of the latest DDMA guidelines and the requests made by various stakeholders and visitors, the New Delhi World Book Fair scheduled from 8-16 January 2022 at Pragati Maidan (ITPO) stands postponed.
The fresh dates will be announced separately.@PMOIndia @EduMinOfIndia pic.twitter.com/jeCwQ9KbMU

As every trade show, book fair, and literary festival organizer and exhibitor knows, this is a move that’s fully necessary under the circumstances of the emergency but also extraordinarily wrenching, particularly because the decision has arrived within three days of the show’s opening.

This year’s guest of honor for the show is France, and it’s clear from floorplans of the anticipated show that the French delegation’s presence is designed to be huge, dominating a major part of the Pragati Maidan Hall 4 layout, in the sprawling facility originally designed with 18 exhibition halls by Raj Rewal and inaugurated by Indira Gandhi in 1972.

A major renovation and building project has created new spaces, which the book fair has been expected to utilize in its 2022 outing.

The program calls for various emphasis points including a children’s pavilion; various “authors’ corners” and a “CEO Speak” forum for programming events; the “New Delhi Rights Table” trading program with a B2B “matchmaking” framework that was meant to be staged on January 10 and 11; and myriad cultural programs that include a song and drama division.

Playing a key role in the National Book Trust’s decision was this week’s decision by the Delhi Disaster Management Authority to consider a weekend curfew, which would have fallen right across the opening of the fair. News reports from the region point to a current 50-percent occupancy limit for private offices, and wire services refer to an announcement from the Delhi health minister, Satyendar Jain today on the official recognition of a third wave of infection beginning, case numbers soaring.

In 2021, the New Delhi World Book Fair moved to a digital evocation of its offerings, attracting a reported 2.8 million hits and user participation from 70 nations. 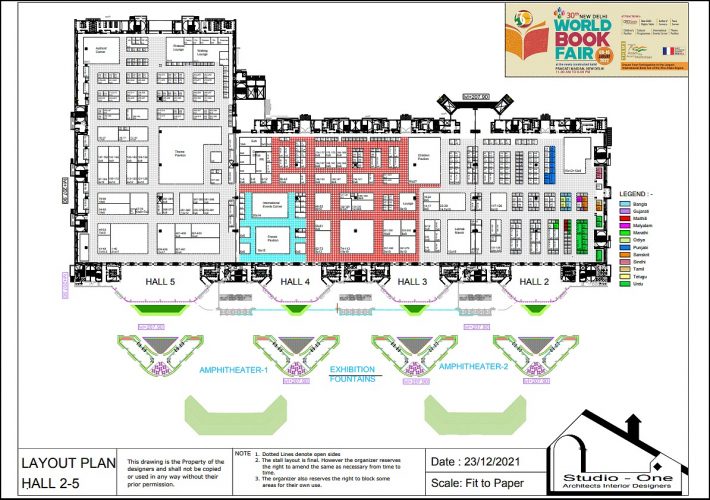 The Coronavirus in India

As we publish this article, India Today is reporting that the nation has seen “a massive spike of 90,928 new cases in the last 24 hours, according to the data revealed by the union health ministry on Thursday morning. Also, 325 more people succumbed to the infection in a day, pushing the nationwide toll to 482,876. Several states including Delhi, Maharashtra, West Bengal, Uttar Pradesh, and Kerala are witnessing an exponential rise in COVID-19 cases.”

Krishna N. Das reports for Reuters that India has just confirmed its first fatality associated with B.1.1.529, the “omicron” variant, in the western state of Rajasthan. The health ministry is reporting that in the past four days, overall infections “have doubled to 58,097.”

Mujib Mashal and Karan Deep Singh write for The New York Times, “As with the “delta” wave, omicron is spreading in India at a time of high public activity—busy holiday travel, and large election rallies across several states that are going to the polls in the coming months.”

As Publishing Perspectives readers know from our coverage, there is a bright spot, however, in the news that a new “vaccine for the world”–the patent-free Corbevax vaccine developed as a nonprofit vaccine by Baylor College of Medicine’s scientists Peter Hotez and Maria Elena Bottazzi—has been granted an “emergency use authorization” (EUA) by the Indian health authorities.

The Hyderabad-based Biological E is to produce a contracted 300 million doses for the Indian government and is said to have more than 150 million doses ready to go. An additional 1 billion doses have been promised for wider Global South distribution.

When you look at the full run of the pandemic in the Johns Hopkins tracking protocol, you see that India has reported a total 35,018,358 cases and 482,551 deaths. 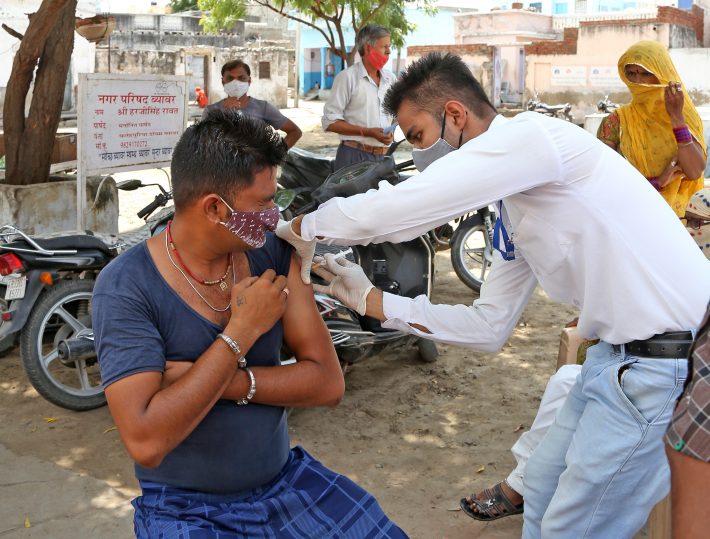 An inoculation against COVID-19 in Beawar, Rajasthan, on 17 September during a nationwide vaccination drive marking the 71st birthday of the prime minister, Narendra Modi. Image – Getty iStockphoto: Sumit Saraswat

More from Publishing Perspectives on major international book fairs and trade shows is here and more on the Indian market is here.