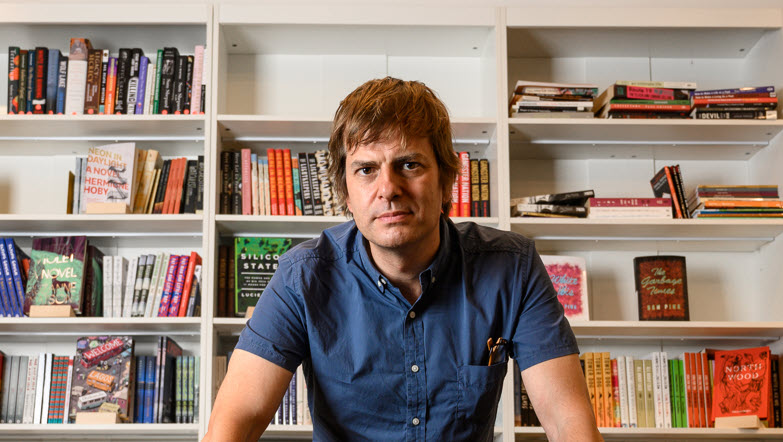 Twice developed in a hurry, first for the US and then for the UK, Bookshop.org is gearing up for international expansion over time. 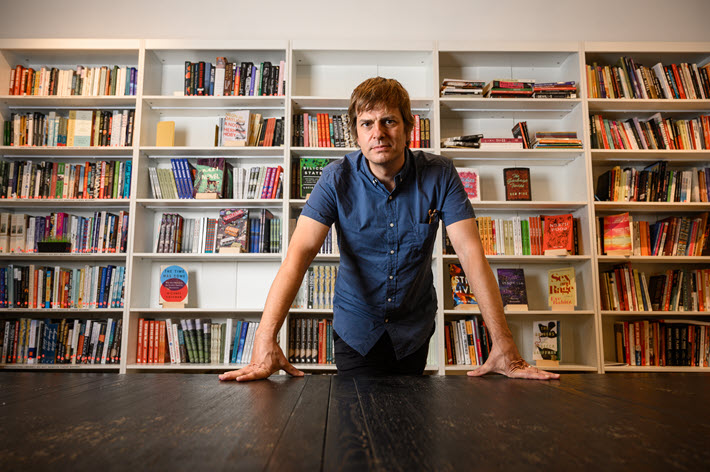 ‘The Power of Small Communities’

When Andy Hunter was looking for US$1.2 million to create Bookshop.org, “It was actually an extremely lonely experience because I was wandering around New York City talking to big agents, like publishers, high-net-worth individuals or investors I thought might care about bookstores.

“And almost all of them were like, ‘Oh, you’re competing with Amazon? No, sorry, can’t do it right now.’ Or they didn’t return my emails or whatever. And I ended up raising about 60 percent of what I wanted to raise and launched with only $775,000 worth raised. Which is very small amount of money if you’re trying to create a platform that’s going to compete with Amazon.”

Hunter, a canny and committed co-creator and/or publisher of Literary Hub, Counterpoint, Soft Skull Press, and Catapult, is lonely no more.

On Friday (January 28), Bookshop.org will mark its second anniversary as a digital retailer of books that channels 30 percent of the retail value of a book sale to the consumer’s chosen local bookstore. Instead of making an online buy at Amazon, the customer elects to make it “at” her or his favorite brick-and-mortar store. 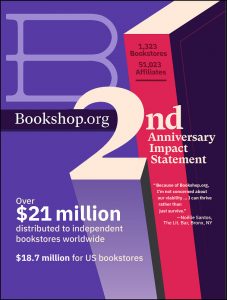 In an impact statement created for the anniversary, the company reports:

And if someone wants to pitch Bookshop.org to a potential participant store or affiliate, you can bet the figure they bring out is this: 78 percent of Bookshop.org customers say they used to buy their books from Amazon.

Hunter, in a conversation with Publishing Perspectives, is talking about those affiliates a lot. Quick with a laugh, a warm personality with a lot of his heart obviously dedicated to what he’s doing, Hunter is maybe a little wide-eyed, himself, not only that Bookstore.org has found such traction on two sides of the Atlantic in two years, but that he and his crew have gotten it off the ground at all.

But he does know why it has worked.

“Amazon has 250 million Prime members, Prime customers,” he says. “People ask, ‘How do you compete with a company like that?’

“The answer,” he says, “is that you leverage the power of small communities, micro-communities, which is what all of our affiliates are. They could be a BookTuber, or a podcaster who has 100 followers. It could be a local bookstore in a small town of 2,000 people. But if you add them all up, if every affiliate brings in 100 customers and you have 50,000 affiliates, then you suddenly have quite a large number of customers.

“They’re great messengers. They’re not only telling people about bookshop.org, but they’re telling people in general, ‘Don’t forget how important it is to support local bookstores,’ especially during the pandemic, when local businesses are struggling under the threat of Amazon and other big major retailers.”

As for the investors who didn’t materialize during that “lonely” period, Hunter says that he does hear, secondhand, about regret expressed by some. “Nobody invested in Bookshop.org because they wanted a return. They’ve invested because they believe in local bookstores—and because we put into our articles of incorporation that we cannot sell to Amazon or any other major US retailer, we kneecapped any ability to exit.” That certainty of mission, he says, has helped assure investors who are “in this for the love of bookstores, not for a big return on their investment.”

‘A Sense of Urgency’

If Bookshop.org was “built with a sense of urgency,” as Hunter puts it—in seven months, which is a very short amount of time”—he says he now sees the operation’s success and staying power to mean he has the time to now build out the system more completely before looking at the kind of international expansion he’d like to make. 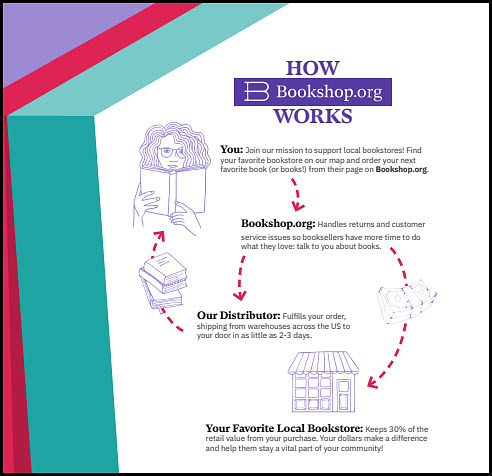 So quickly did the initial development move that, with four employees, “We onboarded 1,100 bookstores on our biggest day,” he says. “We had four people trying to process 50,000 orders on some days.

And then it got harder.

“The next thing that was really hard was that the UK came to us and they said, ‘Hey, you know we really don’t have any good e-commerce solutions for our stores and the lockdown is going to kill us when the holidays come. So can you come to the UK before then? Like by November? Of 2020?

“So right at the time that we’d finally gotten our arms around the US business, and finally I wasn’t going to bed at 11:00 at night and getting up at 4:00 in the morning, every single day … we decided to launch an international service in a new country with a new distributor and new rules about taxes and all of this stuff that’s super-complicated.

What our international Publishing Perspectives readership knows, however, is that few book publishing markets might be more welcoming to Bookstore.org than the British market in which Amazon, of course, not only is seen as a Goliath on the hill but as a foreign Goliath.

‘The Best Place on the Internet To Buy a Book’

So having rushed to create Bookshop.org initially in the United States—and then performed an immediate encore for the super-supportive British market—what does Hunter’s entrepreneurial savvy tell him is ahead as that second anniversary flares into view?

“Right at the time that we’d finally gotten our arms around the US business, we decided to launch an international service in a new country.”Andy Hunter, Bookshop.org

“The good news,” he says, “is that bookstore sales are back to normal. In-store sales are generally at 2019 levels for most stores, or even above those levels.

“So what role can we play when bookstore sales are back, when many stores have their own Web sites? What’s the most useful thing for us to do for the future so we can really fulfill our mission in the smartest way possible?

“Our mission, of course, is to help independent bookstores survive and thrive in an age of e-commerce, and e-commerce isn’t going away. It’s growing 15 percent, year-over-year. More and more people are buying stuff online, and that’s not going to change.

“So small local bookstores that have almost no resources and maybe aren’t great at technology or social media or email lists all that stuff, how do they adapt to this new world and stay in business and do a great job and remain part of their communities in the next 10, 20, 30 years?

“That’s the challenge that we’re up against now,” Hunter says. “Figuring out how we can build on the foundation we’ve got so far to really change the game

“That’s what we’re working on,” he says. “Now. Strategically. There’s a lot of big questions in that. But the simplest way to put it is that we’ve got to become the best place on the Internet to buy a book. If you’re a customer and you love books and you’re going to shop somewhere on the Internet for a book, Bookshop.org has to have the best, most satisfying, most pleasant, most interesting, most exciting site for you to do that.”

“The simplest way to put it is that we’ve got to become the best place on the Internet to buy a book.”Andy Hunter, Bookshop.org

“And Number Two is that we want to become the best place to sell a book on the Internet if you’re a local bookstore. So we want to add functionality to our site that will make us an excellent e-commerce platform for any bookstore. That  includes more customization options, that includes things like eventually being able to choose to fulfill orders through a wholesaler like Ingram or if you have stock of a book maybe you want to fulfill at a higher profit margin. Maybe you’ve got tote bags and mugs and socks you want to sell. Maybe you want to sell ebooks or audiobooks. None of these things do we do yet. We haven’t been able to build them yet.

“But when we looking at our roadmap for the next three years, those are the kinds of features we’re considering doing. Maybe in-store pickup to bring customers in.

“We’ll become more full-featured so bookstores feel, ‘This is such a great platform for us. And it’s made e-commerce so easy that even if we only have one employee, even if we’re a true mom-and-pop serving a small community.’ We’ll have solved that e-commerce problem for them. We’ve allowed them to successfully turn e-commerce into a meaningful revenue stream that helps keep their business afloat.”

Our internationalist question, of course, is on the table.

“We made the decision,” Hunter says, “that we want to make the platform better before we expand internationally anymore. Things like search-engine optimization and speed and making sure our checkout accepts Apple Pay and every little thing that we can do to make the platform best in class. And that way we can go to Europe with a much stronger product. That might be 2023, it might be 2024. But we want to go everywhere we can be useful and everywhere. We can fulfill our mission. Yeah, we’re super-interested in the EU.

“So that’s pretty much the goal for the next three years,” Andy Hunter says. “I think it’s totally possible.”