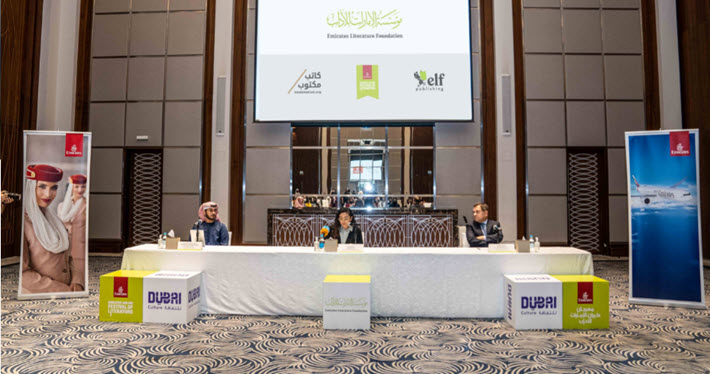 Abulhoul: ‘The Talent That Flourishes Here’

This year’s Emirates Airline Festival of Literature is scheduled for February 3 to 13 in a physical iteration, once more under the direction of Ahlam Bolooki, and newly set this year at Dubai’s hotel and residential development Al Habtoor City.

A public-facing show now in its 14th iteration, as Publishing Perspectives readers will remember, the program went forward in 2021 with an in-person and digitally delivered edition that drew (through both modes) a reported 117,000 people. In that instance, physical audience sizes for events were scaled back. The program was created in 2009 and makes a specialty of featuring sessions with Arab world and international authors.

Of special interest this year, in fact, is a session on February 12 that features Dr. Ali Bin Tamim, chair of the Abu Dhabi Arabic Language Centre and secretary-general of the Sheikh Zayed Book Award. Bin Tamim will be joined by Ahmed Al Ali and Hamed Al Ghaithi in an Arabic-language conversation. (Bin Tamim is featured today in our story here on the Arabic Language Centre and Zayed Book Award’s new partnership with the United Kingdom’s National Centre for Writing and British Centre for Literary Translation.)

The news released today (January 19) by the show’s producing body—the Emirates Literature Foundation, with Isobel Abulhoul its CEO and trustee—is that the festival will make the unusual move of formalizing the creation of a new independent publishing house during the festival this year.

The press is to be named ELF Publishing for Emirates Literature Foundation, although we’ve spotted a small magical creature featured in the press’ logo.

The press is expected to be focused on fiction (all genres), and Emirati and other United Arab Emirates-based authors will be invited to submit material for consideration in March. Significantly, titles are to be published both in Arabic and English.

In comments on the news, Abulhoul is quoted, saying, “ELF Publishing is the next piece of the jigsaw puzzle of the entire ecosystem of literature” in the UAE. 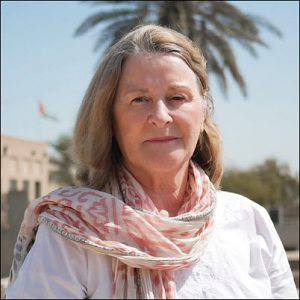 “It continues a proud tradition of literary endeavor. It’s amazing to see what has been achieved in the last 50 years in the UAE in terms of literature and for a young country, we have certainly been punching above our weight.”

Abulhoul’s reference, of course, is to the country’s celebrations of its founding on December 2, 1971 with six emirates. The seventh, Ras al Khaimah, would join the new federation on February 10, 1972.

“This new venture augments these amazing achievements,” Abulhoul says in her remarks. “It’s time that the world of publishing gave more attention internationally to the stories coming out of this region and our aim is to shine a spotlight on the talent that flourishes here.

“We want to find the undiscovered stories that deserve to be read in today’s ever-changing world, whether from Emiratis or expats.”

She also wisely clarifies at the outset that the intention is to create ELF Publishing as a traditional legitimate house: “What we are not is a vanity publisher,” she says. “We’ll be selecting the stories that we believe deserve to be read, operating in the traditional way, with books chosen on merit.”

Bolooki: ‘A Natural Progression for Us’

Initial releases are to include a second anthology of stories from “Voices of Future Generations Middle East, Young Voices of Arabia 2021,” a volume to be released during the festival in February. Among the first authors signed to the publishing house are Ebtisam Al Beiti and Julia Johnson, both of whom are to appear at the festival. Johnson is a children’s book author in the region and is working with illustrator Maitha Al Khayat on a new collaboration for ELF. 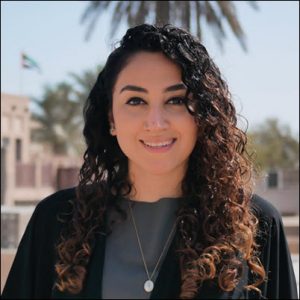 Bolooki, who directs the festival, is to serve as managing director of ELF Publishing, is quoted, saying, “The launch of the publishing house is a natural progression for us,  completing the journey that began with the first festival in 2009, which has seen us go on to support readers and writers in the region with a myriad of initiatives, such as our education program and student competitions, our writing courses, the Emirates LitFest Writing Prize, and First Chapter: the ELF Seddiqi Writers’ Fellowship, the School Librarian of the Year Award, the prison project ‘From the Inside Out,’ Voices of Future Generations, and Kateb Maktub, our partnership with Wikipedia.

“All of these initiatives have made a significant improvement in the number of readers in the region, and, starting from the premise that there are no readers without writers, it’s now time to continue this symbiotic relationship with the festival by turning our attention to authors, looking forward to the next 50 years of literary success.”

The foundation, in its media messaging about the newly forming press, writes, “The UAE has an impressive track record of championing literature, through the pioneering work of Dr. Sheikh Sultan bin Muhammad Al-Qasimi; the establishment in the Emirates of both the Abu Dhabi International Book Fair and the Sharjah International Book Fair, both influential globally; the Sheikha Bodour Al Qasimi’s prominent role in the industry as president of the International Publishers’ Association; and the Emirates Airline Festival of Literature, recognized as one of the leading international literature festivals in the world.”

As you can see on the program’s safety guidelines for the ongoing coronavirus COVID-19 pandemic, proof of vaccination or a negative PCR test will be required of those 18 and older, as will face masks.