Elements of the traveling exhibition unit of Bologna Children’s Book Fair are in both the United Arab Emirates and Qatar this week.

An illustration by Luzzatti for ‘The Book of Why’ by Gianni Rodari from Editori Riunit, 1984. Image: Provided by Bologna Children’s Book Fair

The point here, of course, was to display the offerings of Bologna itself, which is scheduled for March 21 to 24.

Amoeba-like, Bologna’s traveling exhibition this week has divided into two.

It has a presence at the long-running Expo Dubai 2020 (so numbered because of delays enforced by the coronavirus COVID-19 pandemic) and will run there through Saturday (January 22).

It also is represented at Doha International Book Fair, which also is running through Saturday. 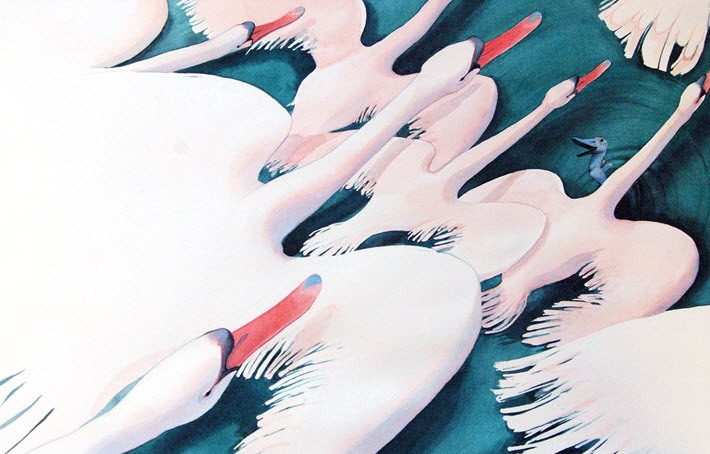 In the Dubai edition, Bologna is at the show’s beautiful Italian pavilion where, incidentally, a 3-D printer’s evocation of Michelangelo’s David has caused a good deal of consternation because the full-size replica cannot be viewed fully by most visitors. Alexander Cornwell has a succinct write-up for Reuters Dubai with Abdel Hadi Ramahi’s photography, in case you’ve missed this controversy.

Organizers add that in the autumn, the Italian Institute of Culture based in Abu Dhabi will be taking the exhibition to Ahmed Al Ameri‘s Sharjah International Book Fair (SIBF). Italy will be guest of honor at the 2022 Sharjah show, running November 2 to 12.

The exhibition is the first event of what’s described as an extensive cultural program that Italy will be fielding at Sharjah, expected to engage not only Bolgna Children’s Book Fair but also the  BolognaBookPlus program it inaugurated last year in its digital rendition.

The venue for Bologna’s exhibition in the Doha show this week is the stand mounted by the Italian embassy in Qatar, and there, the now-familiar Illustrators for Gianni Rodari show created in 2020 is on view. Made possible by partnerships with the Emilia-Romagna Region and the Italian Cultural Institute of San Francisco—and assisted by the Italian Consulate General—the exhibition displays an overview of illustrations of Rodari’s works by 21 artists over many years, developing a kind of time line of Italian illustration.

And there’s a new exhibition, Out of Silence. Yesterday, Today, Tomorrow, Narrating Through Wordless Books. Apparently it takes a lot of words to name a wordless-book exhibition.

Our readers will recall that we looked at a wordless comic series from South Africa on Friday (January 14) in our Rights Roundup.

This show has 41 “silent” (wordless) books by Italian authors, selected for Bologna Children’s Book Fair by the Giannino Stoppani Cooperative/Drosselmeier Academy for the way they’ve mastered this new form of narrative.

In descriptive copy, organizers write, “Ranging from historic, internationally renowned artists like Bruno Munari, Enzo and Iela Mari, Alessandro Sanna, and Fabian Negrin to the latest generation of illustrators, and displaying a broad palette of styles and poetic, the works have in common an unfailing quality.

“Wordless books invite the reader to co-create the narrative along with the author,” who is, of course, an illustrator. “They are an opportunity for the very young to become acquainted with how stories are told. The absence of the written word also allows the ‘silent’ book to overcome linguistic barriers, and reach marginalized sectors of society, becoming a literary form for everyone to share.”