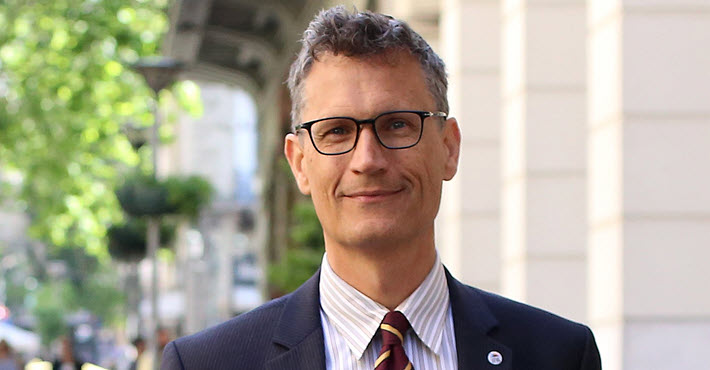 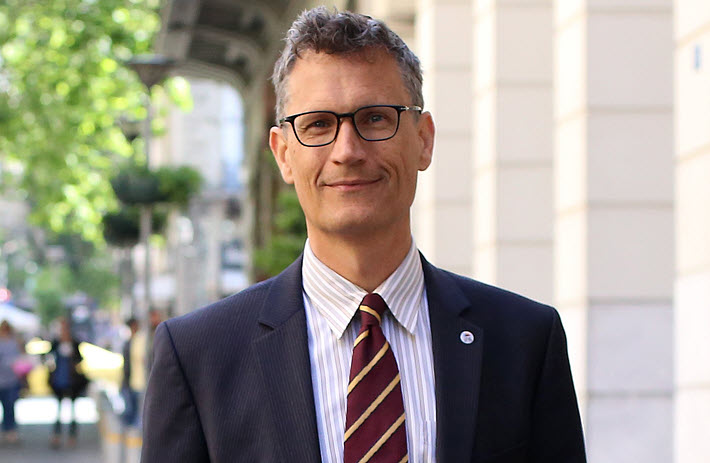 ‘We Can Help as Publishers’

Speaking from the Netherlands for our Publishing Perspectives interview, Michiel Kolman concedes that academia is “way ahead” of the publishing world—to a degree.

“New concepts come from academia,” he says, “whether academic concepts or maybe concepts that pop up in the next generation of students. But if you use another lens to look at how diverse and inclusive are the organizations themselves, like universities or research organizations, I would say there’s room for improvement.”

And “room for improvement,” as Kolman’s colleagues know, is this reliably diplomatic executive’s way of saying that nobody should be resting on their laurels.

“Here in the Netherlands,” he says, “only 25 percent of the full professors are female, while the population is half-and-half” female and male. “If you look at authors in physics across the European Union, they’re only 27-percent female. If you look at computer science worldwide, I think not even 10 percent are women. And that’s just with a gender lens.

In world publishing, Kolman is an accomplished and dedicated observer of issues in diversity, equality, and inclusion.

He’s a necktied activist whose professional titles place his work as co-chair of the Amsterdam-based LGBTIQ+ nonprofit Workplace Pride right alongside his 22-year career with Elsevier, now as senior vice-president of this major academic publisher’s research networks and its academic ambassador.

Having served a two-year term as the International Publishers Association‘s (IPA) president in 2017 and 2018, Kolman now is the IPA’s Inclusive Publishing and Literacy committee chair.

He’s also a board member of the Brussels-based Federation of European Publishers, and vice-chair of the Accessible Books Consortium (ABC), a public-private partnership led by the World Intellectual Property Organization (WIPO).

“And I think we can help as publishers” with challenges in diversity, Kolman says. “We have lots of data. We have studies, we have reports, and we can also help through our publications.”

Kolman advocates what might be called data-gathering persuasion. “Not only in our journals,” he says, “but also in what I call ‘inclusive research.’ For instance, nowadays, clinical trials are often conducted with white males. And if you think about it, you want inclusive research. That means you have a different lens around race and ethnicity, a different lens around gender, and that’s something we can support.

“One specific thing we’ve been doing at Elsevier, is that at our journals, we ask for a ‘diversity inclusion statement’ and their authors can identify themselves. ‘I belong to, say, the LGBTIQ+ community’ or ‘I’m a Black scientist.’

“The definitions depend a bit, of course, on the society you’re in,” Kolman says, “but this is how they identify as authors, and that’s very interesting because we don’t have much data in that area.

“We can also ask them,  ‘So did you think about inclusion and diversity while doing your research?’ That’s also super-interesting, especially when you talk about medical research.” The goal of this is to prompt scholarly authors to keep diversity in mind “when planning and executing research.”

There are things in publishing, of course, “that we can influence directly,” Kolman says. “Now, 21 percent of all our journal editors are female. Fifty-one percent of our [overall] staff is female. In trade publishing, the percentage is higher.”

Indeed, surveys in the two largest English-language markets, Britain and the States, show that the trade book workplace has surveyed in recent years as running between 70- and 80-percent female.

Kolman agrees that issues of “diversity” and “inclusivity” encompass a range of demographic features. In addition to gender balance, there are questions of race and ethnicity, sexuality, age, language, socio-economic status, class, and more.

On “the balance between the Global North and Global South … we did launch high-level, high-quality journals specifically for authors from Africa.”Michiel Kolman, Elsevier

In academic and scholarly publishing, Kolman says, “If you talk about the balance between the Global North and Global South” there are serious differences in the welcome held out to scholarly research. “At Elsevier, we did launch high-level, high-quality journals specifically for authors from Africa. It enables greater success–all open access, of course.”

He agrees that a very real-world drama put the problem of international bias into sharp relief in late November.

Eyebrows were raised when it was learned that the World Health Organization (WHO) had been alerted to detection of B.1.1.529 by genomics surveillance operations in South Africa. Many might not have expected such advanced scientific activity to come from the Global South. That lab work had defined and alerted the world to the danger of what soon would be dubbed the omicron variant of SARS-C0V-2.

At Elsevier Connect: ‘Working Toward Racial and Social Equity‘

As Tulio de Oliveira wrote for Klaus Schwab’s World Economic Forum, “Fortunately South Africa is well set up for this. This is thanks to a central repository of public-sector laboratory results at the National Health Laboratory Service, (NGS-SA), good linkages to private laboratories, the Provincial Health Data Centre of the Western Cape Province, and state-of-the-art modeling expertise.”

And after the November 24 alerts were transmitted from Durban to WHO scientists, Stephanie Nolen wrote up the story for The New York Times, datelined December 4 in Ntuzuma and confirming the efficacy of “a sophisticated South African effort to stanch the emergence of new variants of the coronavirus, which was identified here and shook the world this past week … [thanks to] a state-of-the-art laboratory … the KwaZulu-Natal Research and Innovation Sequencing Platform in Durban, [where] scientists sequence the genomes of thousands of coronavirus samples each week.

“The KRISP lab, as it is known,” Nolen wrote at the Times, is part of a national network of virus researchers that identified both the beta and omicron variants, drawing on expertise developed here during the region’s decades-long fight with HIV.” And de Oliveira is KRISP’s director.

What would become the most aggressively contagious variant yet detected in the coronavirus COVID-19 pandemic had been correctly detected, identified, and flagged to the world scientific community from deep in the Global South.

In such cases, Kolman says, one of the biggest mistakes that the academic and scholarly communities can make is “helicopter research” in which, as he describes it, “Somebody from the Global North goes to do the research in the Global South without involving the local expertise and not having a broader conversation on the ground.”

Funding bodies that support scientific research, Kolman says, can have serious impact on issues in diversity and inclusivity. “You put this in a positive way,” if you’re a foundation or other funding body’s representative. “You say, ‘We realize that we have very few researchers from ethnic minorities. We have a special fund available to stimulate this.'”

“At Elsevier, we have gay pride chapters all over the world, in the Philippines and in India and Brazil. We benchmark how well we’re doing.”Michiel Kolman, Elsevier

The key in such cases, Kolman says, is that positive approach. And an equally positive outcome awaits, Kolman says: “We know that if your research group is more diverse, you’ll be more creative, more innovative. So why not stimulate that, from a funder’s position? Absolutely.”

Kolman also points to how social and political events have contributed to progress.

“Black Lives Matter was a wakeup call for many of us,” he says. “We started supporting the Black colleges at Elsevier, a whole program to open up the dialogue around race and ethnicity. But there’s still much we should do. And we see from hard data in the UK and in the USA, that [attracting] Black talent and retaining them is very difficult. We really have to change that over time. 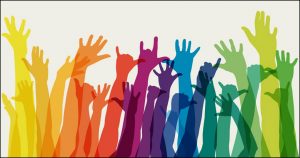 At Elsevier Connect: ‘Pride Hub for LGBTQ+ Research and Commentary‘

“Personally,” Kolman says, “as an out-and-proud gay man, if I look at what it was like when I started my career in publishing and today, things have improved dramatically.

“At Elsevier, we have pride chapters all over the world, in the Philippines and in India and Brazil. We benchmark how well we’re doing. We work with HRC [the Human Rights Campaign] in the US, and we’ve scored for the last year 100 out of 100 for Workplace Pride internationally. So if you look at how the LGBTQ+ communities support us in the workforce, I think that’s a great story to tell.

“We also started sharing more of what we can do on the content side,” Kolman says, “with Pride Hub,” which aggregates Elsevier’s research and commentary on topics that affect LGBTQ+ people.

In that range of diversity-relevant topics, Kolman adds, “I think we can also make much more progress for people with disabilities, both for our staffs but also externally.”

“From a diversity/inclusion perspective,” Kolman says, “we saw during the first two pandemic years, that organizations which were quite advanced and quite diverse and inclusive performed really well during the pandemic. The sense of employee engagement was a good illustration of this: It was at an all-time high, people felt included, they felt a sense of belonging, that sense of purpose.

“If you look at authors in physics across the European Union, they’re only 27-percent female.”Michiel Kolman, Elsevier

“But at the same time, we also see that the pandemic has its most adverse effects on minorities. We see that, for instance, among female scientists, the burden on them has been higher than for male scientists during the pandemic.

“So I do worry that in the long run,” Michiel Kolman says, “vulnerable minorities will suffer more,” something for both research and publishing communities to keep in mind.