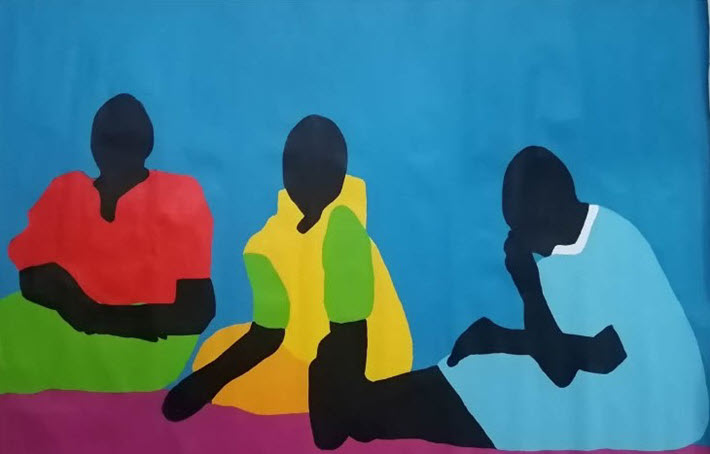 Kaaps is more than the street vernacular it’s been assumed by many to be. South Africa’s Olivia Coetzee curates a collection of translations.

‘iThemba ‘lethu’ by Zanele Montele, acrylic on canvas. Image: Courtesy of the artist and provided to Publishing Perspectives by Words Without Borders

Coetzee: ‘Between Language and Its Speakers’ Identities’

The November issue of digital magazine Words Without Borders has featured guest editor Olivia M. Coetzee’s look at Kaaps writing from South Africa, and we want to bring this to your attention, not least because it’s an example of Words Without Borders’ work in bringing to light some of the literary world’s niche linguistic contexts.

Of course, much attention to South Africa in recent days has been focused on the situation with the coronavirus COVID-19 pandemic and the identification by scientists in South Africa of the B.1.1.529 “omicron” variant. You’ll find some updates at the end of this article on that.

In her introduction to Kaaps, Coetzee—who is originally from Namibia and was raised near Cape Town—points out the question “What is Kaaps” produces more than one answer. “Some would say that Kaaps is an Afrikaans dialect spoken by the so-called ‘Coloreds’ living in Cape Town. Others see Kaaps as a language distinct from Afrikaans,” she writes.

In notes provided by Words Without Borders editorial director Susan Harris notes, “Kaaps was created in settler colonial South Africa, developed by the 1500s, and took shape as a language during encounters between indigenous African (Khoi and San), South-East Asian, Dutch, Portuguese, and English people. Late-19th-century Afrikaner nationalists appropriated Kaaps and eliminated the indigenous elements in order to create the dominant version of the language in the form of Afrikaans.”

Coetzee points to the fact that Kaaps has been considered slang, and thus “Kaaps literature and identity are in their infancy.

“While the first written form of Kaaps appeared in the Arabic Afrikaans alphabet of the early 1800s, there is a limited literary history where Kaaps is concerned. And this absence of Kaaps in the greater South African landscape contributes to the assumption of a people without an identity, agents of the ‘White man’s language,’ Afrikaans.

“And this is problematic for so many reasons to do with who we are as a people,” she writes, “with our identity, our roots, how we see ourselves in the world, where we see ourselves, and our place in the greater society of South Africa.”

What Coetzee is experiencing, it turns out, is the rise of Kaaps as a bonding agent between those who speak it. It begins to function as an element of identity, as she writes. “Language is important, not just as a communication tool, but as a marker of agency,” even with its image still in need of an upgrade.

“A lot of work must still be done to grow positive ideas about Kaaps and the Kaaps movement,” she writes, “but there are already some exciting initiatives underway. Currently a group led by Prof. Quentin Williams at the University of the Western Cape is in the process of producing a trilingual, first-of-its-kind Kaaps dictionary, and this work is a massive step in the direction of becoming as a people.”

The writers whose work she brings to the edition, she says, “not only expand the body of Kaaps literature, but also confirm the link between language and its speakers’ identities.”

In the Kaaps-Focused Edition of ‘Words Without Borders’

In addition to Coetzee’s introduction, the Kaaps edition features six works in translation to English.

While at Words Without Borders, you’ll find that the December edition is featuring writings about New York City in Spanish.

The Coronavirus in South Africa

As mentioned above, international news around South Africa has been difficult lately, of course, as scientists rush to broaden their understanding of B.1.1.529, the “omicron” variant of the coronavirus COVID-19.

While many in South Africa have felt understandably penalized by travel restrictions resulting from the initial report and detection of the variant, Stephanie Nolan at The New York Times has a fine feature on the state-of-the-art KwaZulu-Natal Research Innovation and Sequencing Platform (KRISP) in Durban and the accompanying door-to-door campaign being deployed to reach the population. The speed with which KRISP reported out its findings has contributed to the timeliness of today’s coordinated, cooperative international research effort on the variant.

Nevertheless, Darren Taylor reports for the Voice of America on a dire surge in cases. “In the past week,” he writes, “cases have reached more than 16,000, up dramatically from 2,300 last Monday, according to South Africa’s National Institute for Communicable Diseases.” Only some 36 percent of the population is reported vaccinated, although the president, Cyril Ramaphosa, says vaccine supplies are sufficient.

And in the wider international medical community, there are cautiously observed indications that the omicron variant does appear to be more infectious than the delta variant, but may carry less punch in terms of the severity of sickness it may cause. As Jason Douglas and Drew Hinshaw report today for the Wall Street Journal, “The omicron variant of the coronavirus is weeks away from becoming the dominant strain in parts of Europe, government officials and scientists say, as emerging evidence from the UK, Norway, and South Africa suggests that vaccines may offer significant protection against severe illness with the variant.”