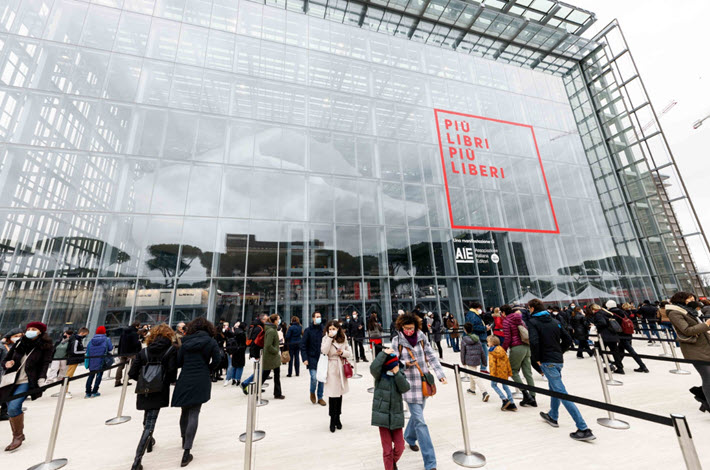 Positioning itself for the road to its turn as Frankfurter Buchmesse’s 2024 guest of honor, the Italian market is celebrating its international rights sales. 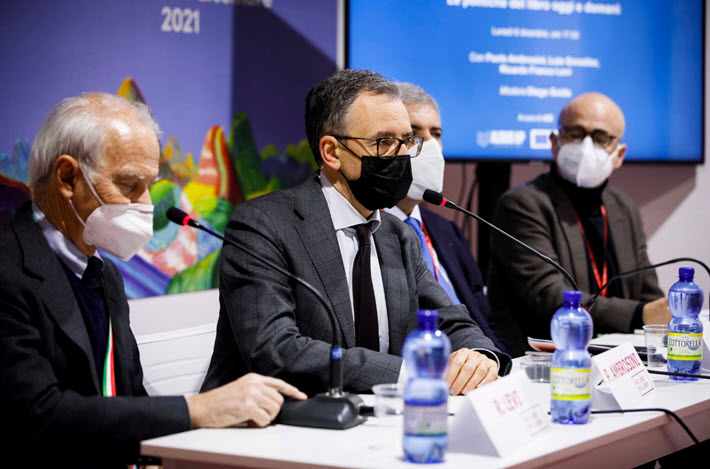 Having made several year-end reports from this month’s Più libri più liberi—the national fair in Rome for small and medium publishing companies—the Association of Italian Publishers (Associazione Italiana Editori, AIE) is going out on a high note for 2021, announcing that Italian literature and its industry are “increasingly international” with translation rights to 12 percent of its published works being sold annually into the international trade.

In the first pandemic year 2020—much of it an excruciating experience of the coronavirus COVID-19 pandemic for the nation–the AIE says it actually managed to raise its rights sales into international territories to a total 8,586 Italian works, 0.2 percent more than in 2019.

The drawback? The association is concerned to have found that small- and medium-size publishers—those putting out between nine and 100 titles per year—account for only 9 percent of this total, three percentage points less than the previous year. Clearly, then, both the success and the task ahead are becoming clear.

“The International Dimension of Italian Publishing” is the name of the report in which these and other figures were reported, a session led by AIE president Ricardo Franco Levi.

“Supporting our publishers abroad—especially medium and small ones—has always been one of our primary objectives,” said Ricardo Franco Levi.

“And Più libri più liberi confirms it again this year with our rights center,” a two-day trading floor and coupled with a fellowship program that was developed in the AIE’s new association with Elena Pasoli‘s Bologna Children’s Book Fair.

Levi also pointed to “a calendar of activities for foreign publishers aimed at their discovery of and interaction with the world of Italian literature for young readers.

“And the most important appointment on the horizon,” he said, “is the 2024 edition of the Frankfurter Buchmesse, at which Italy will be the guest of honor—an event we’ve already been preparing for, for a long time.”

At La Nuvola during the 2021 Piu libri piu liberi in Rome. Image: AIE

To get a sense for the relatively fast trajectory of international rights sales for Italian work, consider that in 2001, translation rights to only 4 percent of published titles from Italy were sold to international publishing houses.

Looking at a corresponding 6-percent decline in purchases of new titles from other markets (9,127 books), the association sees itself to be “a country that’s very open to foreign cultures and literature, a country that translates frequently but that, over the years, has also become less dependent on literary contributions from abroad,” according to commentary developed for the news media by the association’s research division.

In the long-term, the association asserts that it anticipates a balance. For the moment, imports are more numerous than exports, but the publishers’ community, cheered by this new progress, is looking to push the export side higher.

“We still buy more publishing rights from foreign publishers than we manage to sell,” the team’s discussion points clarify, “but in some sectors, like those of children’s books, illustrated works, and nonfiction titles, the situation has already reversed.”

At a more granular level, in 2020, Italian publishers bought foreign rights to:

Who buys the most rights to Italy’s literature?

There were 5,914 books purchased for international publication and/or translation.

That 9-percent figure for the amount of exported content produced by small- and medium-size publishers is particularly concerning to the association because it represents a serious setback:

The publishers, however, newly re-sensitized to the coronavirus’ role as B.1.1.529, the “omicron” variant moves quickly into Italy, point to “the exceptional circumstances of the first year of the pandemic,” and add, that the number of international rights transactions per small publisher came to only 3.1–so low as to “make every single operation expensive.”

Co-publications also are listed by the association as suffering a setback in 2020, dropping by a steep 65 percent. “However,” writes the team, “with 1,037 books, down from 2,987 in 2019), they still remain an important segment for the internationalization of Italian publishing.

Joining Levi in making the announcements of Italy’s international rights development were Carlo Ferro, the president of “ICE,” the Italian Trade Agency, which is stressing its support for the publishing sector.

“Books are still one of the preeminent means for spreading culture,” Ferro said. “Aware of this fact, the country’s economic system remains by the industry’s side and, like ICE, has confirmed its support.” 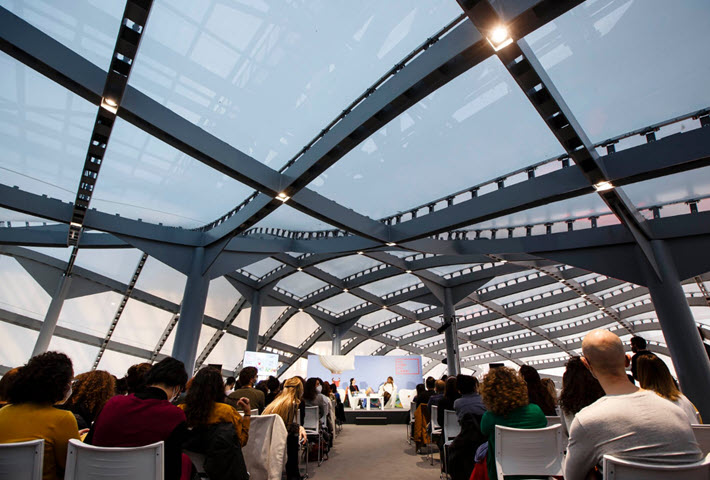 An audience in “the cloud” that gives Rome’s La Nuvola its name, for an author’s book presentation during Piu libri piu liberi 2021. Image: AIE