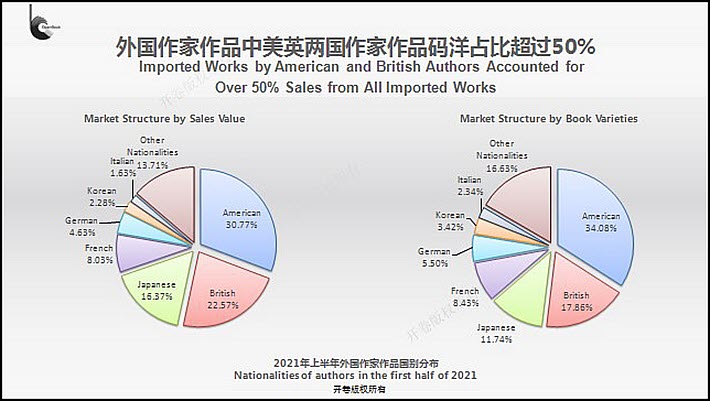 A new Beijing Open Book report looks at what kinds of books Chinese editors are buying from abroad and sales of translated titles in China. 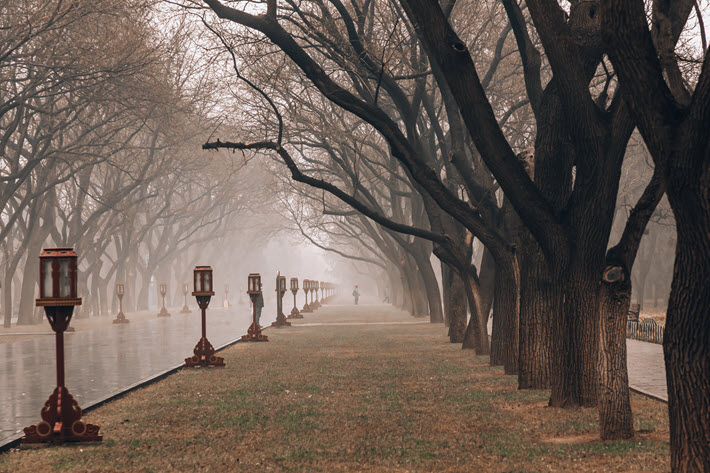 Classics and a Domestic Focus

Readers who follow Publishing Perspectives’ monthly China Bestsellers series are familiar with the work of Beijing Openbook, the independent research firm headed by CEO Jiang Yanping, who spoke at “The Markets” conference in 2018 at Frankfurter Buchmesse.

As part of today’s Rights Edition, we’re pleased to have a special report from OpenBook on the how translated books publishing in China have fared. To date, their research gives us insights into the first half of 2021—that critical transition period, of course, from the first to the second year of the coronavirus COVID-19 pandemic.

While recovery has been underway in China, the OpenBook team has been tracking considerable negative dynamics in the market’s imports of international literature, and that, of course, means that publishers and authors in other world markets may well have seen an impact on their overseas rights sales. Early in 2022, we’ll expect to be able to follow today’s report with a look at the latter half of the year, so that we can quickly gather a picture of the rights-trade going into China at the start of the third pandemic year.

Supervised by OpenBook manager Feng Xiaochui, the report shows what’s described as a “downward trend” in China’s rights buying of work by non-Chinese authors—titles that frequently appear on the Foreign Authors Fiction and Foreign Author Nonfiction Chinese bestseller lists we produce each month.

Overall, OpenBook sees the Chinese market as rising by 11.45 percent, year over year, in the first half of 2021.

Physical retail outlets have demonstrated ‘significant rebound,” while the scale and diversification in online retail are seen as broadening. Between January and June of this year, the children’s book market grew, although adult literature—the heart of the “leisure reading” sector retained a decline that had begun during 2020 under pandemic conditions. 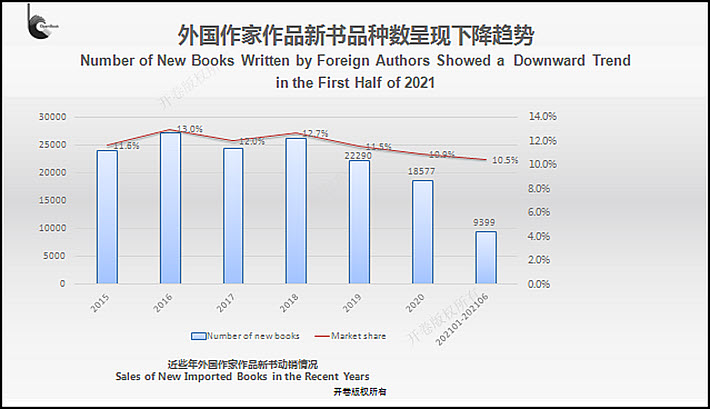 In discussion at this point, we learn that books by American (30.77 percent) and British authors (22.57 percent) dominate the overall number of translated titles published in China.

Japan was next, at 16.37 percent. That figure on the success of Japanese rights sales into China can be attributed in part to the profound popularity in China of the works of Japanese author Keigo Higashino. In our November foreign-author bestseller lists, for example, seven of the Top 20 titles are books by Higashino. France followed Japan in the first half of the year for the fourth-highest portion of international rights sold into China, at 8.03 percent. 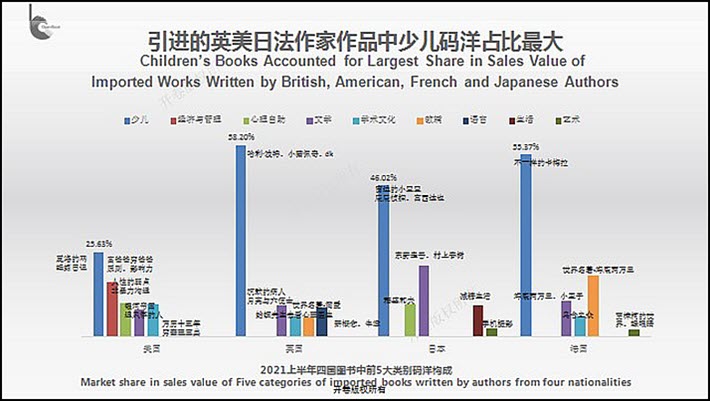 OpenBook sees children’s books accounting for 43.92 percent of the sales of foreign titles in the first half of this year in China. In sales value, foreign children’s books came to 34.63 percent. OpenBook’s data indicates that since 2015, “the proportion of the number of foreign works in the children’s sector has been increasing, but market share in terms of sales value has decreased.”

Specific areas of decline in children’s books are:

The OpenBook team attributes the decline of translated children’s books as a response to a recent rise in the popularity of China’s traditional culture, which has stimulated a fondness for domestic original work. In terms of relative sales value, the team reports, “We could not ignore the impact of some discounts on the imported books with higher list price.” 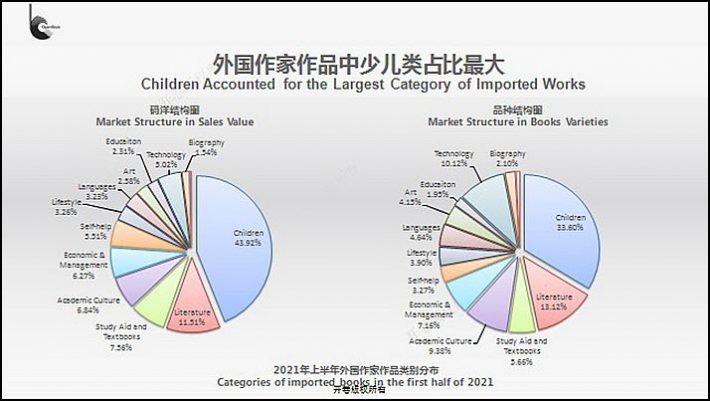 In looking at what translated books were selling, there’s an interesting reflection here of the wider bestseller lists, which often show the Chinese readership’s fondness for relatively contemporary classics.

Along with children’s books, the largest area of translated books in China reflected a robust interest in the market’s readership in lifestyle content, education, biography, and self-help. Taken together, these works, like children’s material, exceeded 30 percent of foreign titles, with computer books, natural science, economics, and management being among the leading categories. 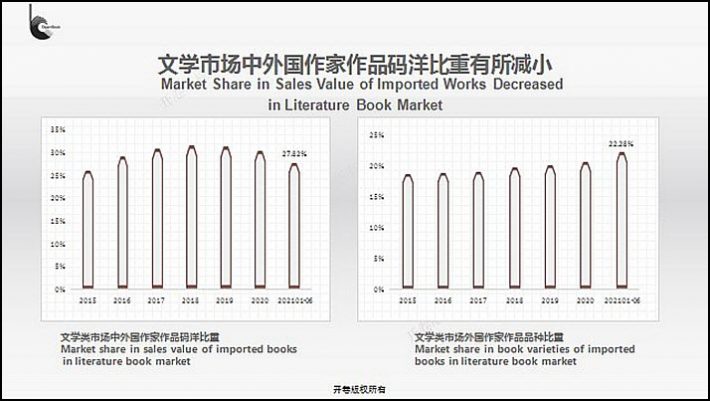 The Staying Power of the Classics

In the first half of this year, OpenBook saw foreign adult literature holding 27.82 percent market share and 22.28 percent in what OpenBook calls book variety. The team says that in recent years, it’s seen a rise in translated books in market variety against a decline in sales value.

And it’s in adult literature that rights sales of books into China appears to have been hitting the strongest headwinds.

The OpenBook group’s assessment of this includes an observation that the Chinese market has seen the strongest “domestic online literature category in the entire literature market in recent years.” That is to say an intense engagement with China’s own literature has seemed to be a part of the impact of the pandemic’s upheaval. This, then, can be coupled with a formidable preference among many Chinese book consumers for classics, whether foreign or domestic.

Our November chart, for example, shows Frank Herbert’s 1965 Dune moving onto the Foreign Author Fiction Chart at No. 19. That’s a 2016 edition from Jiangsu Literature & Art Press that’s been driven onto the market in November following the October 22 release in China of the opulent new Denis Villenueve-Jon Spaights film adaptation from Warner Bros. The foreign-specific list picks up the same Dune debut (at No. 5) and also shows Herbert’s Dune Messiah, the second title in Herbert’s six-book series, entering the chart at No. 8.

While that new activity is understood to be a tie-in dynamic to the cinematic moment, the top three spots of the overall fiction chart are being simultaneously taken over (again) by Liu Cixin’s 2008-2010 “Three Body Problem” series titles–content not unlike Dune, but established for decades in China as a stalwart demonstration of the market’s domestic fondness for its classics. Like a counter-balancing effect to something new in Western science fiction having arrived, the sturdy popularity of Liu’s work is being revisited, a touchstone.

In short, the pandemic-era performance going into the first part of this year seems to be showing us a market reaching for the familiarity of domestic work, the reliable preference for series, and the rock-solid allegiance to relatively recent classics (basically from the mid-20th century)–and some resulting pushback for international rights sales that might otherwise have gone into China.

We can offer a few more bullet points, quickly, to demonstrate the relative presence of international rights sales in the upper end of the market’s charts, January to June:

And with this interpretive look at the January to June market, an update in the new year on how the second half of 2021 has appeared will be helpful in forming an assessment of what rights directors and international-rights literary agents might expect going forward.

Should it be of help, we have an evaluation from OpenBook of the Chinese market overall—as opposed to this Rights Edition’s focus on translated titles. That article is here, and was published on August 8. 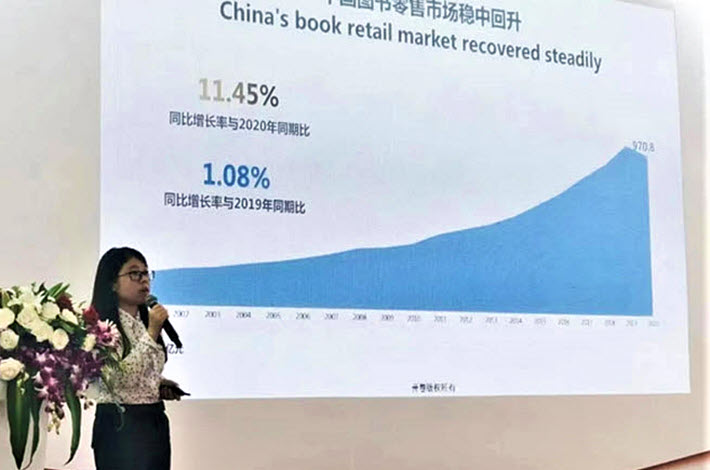