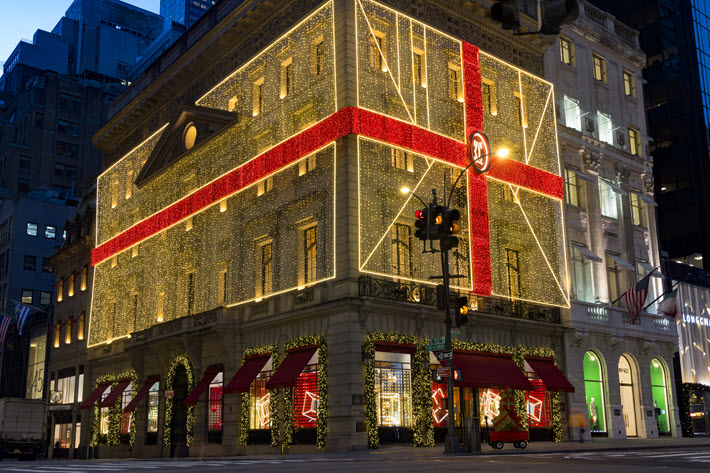 Year-to-date book sales in the American market are looking likely to converge with that of 2020 at 8 percent growth, reports Kristen McLean at NPD Books.

In today’s release (December 13) of its United States print books weekly media report for the week ending December 4, Kristen McLean, executive director and industry analyst with NPD Books and Entertainment, shows the American publishing industry pressing into the holiday run with the strength that has distinguished it and several other world book markets in the second year of the coronavirus COVID-19 pandemic.

“This past week was essentially flat” in comparison to the same week in 2020, she reports, “crossing the 25-million-unit mark about a week earlier than the seasonal norms set in 2019 and 2018, and two weeks earlier than 2017.

And this time, McLean has included what NPD Group calls its “Total Market Retail Thermometer” (from its “Retail Center of Excellence” material), to get a look at the sales revenue performance of all other non-book retail that NPD tracks as a percentage of 2019 performance.

In NPD’s “Total Market Retail Thermometer” view, the year-to-date 2021 US dollars rating has exceeded that of 2019, five weeks into the holiday season.

“Year-to-date total market dollar sales for all the non-book industries NPD tracks,” McLean says, “has already exceeded both 2019 and 2020 with several weeks to go. However, this strong growth is really about higher prices. 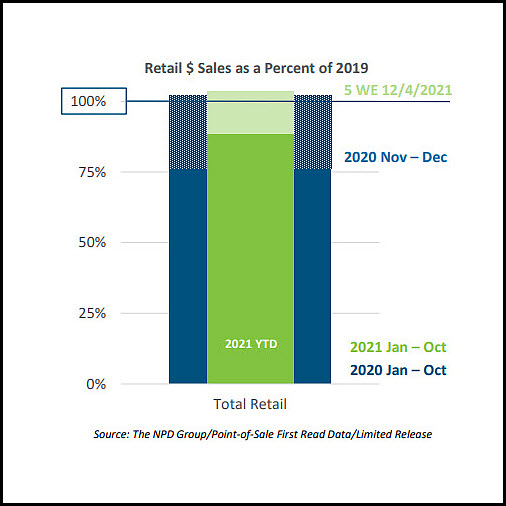 “For instance, during Black Friday week, units were up just +3 percent, but the average selling price (ASP) was +10 percent, giving the market +14 percent growth in US dollars that week. Despite higher prices, consumers are still buying, which is expected to give the United States a strong holiday season overall.”

In her look at the week-over-week performance of print, as of the week ending December 4, McLean sees the US market reaching 25 million units in weekly volume with four weeks to go to complete the year.

Unit sales rose 6 million  units over the previous week and were essentially flat by comparison to the same week in 2020.

Year-to-date performance is “coming together with that of 2020,” McLean says, “and it’s increasingly likely that we’ll converge at 8 percent year to date,” which would put the American book market 17-percent ahead of 2019 and 16 percent ahead of 2018.

You see this coming-together in the chart McLean provides us today for year-to-date performance.

Source: NPD Group/NPD BookScan through December 4, 2021, US print sales only

In content trends, McLean sees fiction dominating the American Top 10 in print, but its’ Brené Brown’s nonfiction self-help guide Atlas of the Heart: Mapping Meaningful Connection and the Language of Human Experience (Penguin Random House, November 30) that stands in the No. 1 spot.

JK Rowling’s The Christmas Pig (Scholastic, October 12), with its illustrations by Jim Field, is at No. 6 and currently listing as sold out at Scholastic’s site but available at larger digital retailers.

And Chanda Aebersold and Chanda Bell’s The Elf on the Shelf is back (B&N Distribution, 2005) with illustrations by Coë Steinwart and standing at No. 7.

More on the United States market is here, more on the NPD Group’s reports is here, and more from Publishing Perspectives on political books is here. More from us on industry statistics is here.