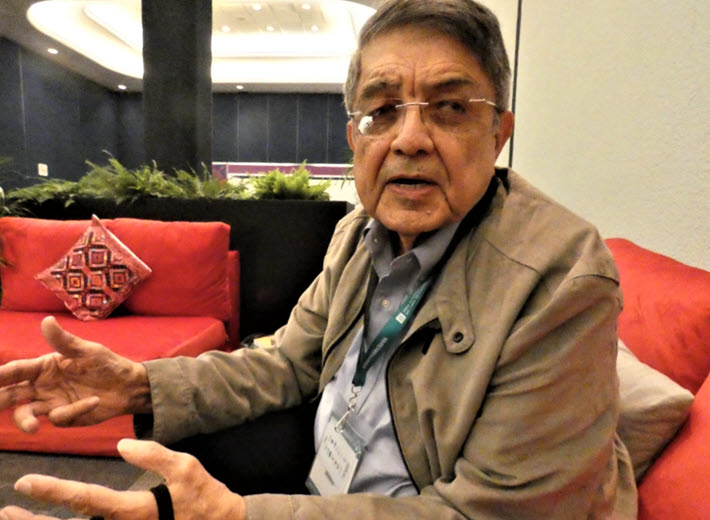 ‘Asylum is very difficult’: Nicaragua’s Sergio Ramírez talks about moving to Spain and ‘the role of a writer.’

Sergio Ramírez, 79, speaking to Publishing Perspectives in Guadalajara, confirms that he plans to return not to Managua but to Madrid.

It’s the kind of irony that has characterized much of Ramírez’s acclaimed career.

“I always separate my fiction from political expression,” he says. “I don’t think fiction books are the best instrument to bring about ideas—political ideas, ideology, and so on.”

And yet the October release from Penguin Random House’s Alfaguara of his new Tongolele no sabía bailar—Tongolele Had No Rhythm, as Alma Guillermoprieto translates it in her astute The New York Review piece—has led to his and his wife’s decision to “put an ocean” between themselves and Central America, as he told Gumersindo Lafuente for elDiario.es.

In Ramírez’s new book, 21st-century revolts are underway in Nicaragua, uprisings that are harshly repressed by the government.  The Tongolele of this title is not the exotic dancer from Mexican films of the 1940s but the code name for a government intelligence operative. And the fiction appears to have come too close to fact for the real-life regime of Daniel Ortega. 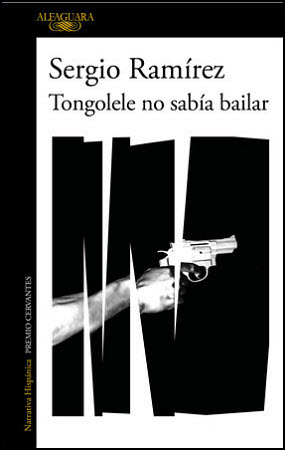 The government issued a warrant for his arrest in September. Although he had left politics in the mid-1990s and dedicated himself to his writing, Ramírez says that Managua banned the book and seized copies of Tongolele no sabía bailar in Nicaragua, following the author’s denunciation of the planned November election. As recounted by the Associated Press, Ramírez had told the press in June that there was “zero possibility” of free and fair elections in November.

“He said the 75-year-old Ortega had imposed a system of terror,” the AP wrote, “that prevents people from freely taking to the streets and that he will not tolerate any opposition electoral campaign.”

More irony: Ramírez was, of course, from 1985 to 1990, Ortega’s vice-president. He and his colleagues in the “Group of Twelve” supported the insurgency that ended the Somoza dictatorship. He was a member of the five-man Junta of National Reconstruction. By the 1990s, he’d distanced himself from Ortega.

But last month Ortega and his wife Rosario Murillo—she’s now in the role of vice-president that Ramírez once held—claimed victory in what Washington termed a “pantomime election.” It’s estimated that as much as 80 percent of the eligible electorate may have abstained from voting.

“And now,” Ramírez tells Publishing Perspectives, “there are almost 40,000 Nicaraguans trying to cross the border between Mexico and the United States. This is amazing because last year, that number of people had been very reduced. “Now, Nicaragua is part of that crisis.”

And the author—the winner of Spain’s 2017 Miguel de Cervantes Prize and Mexico’s 2014 Carlos Fuentes International Award for Literary Creation in the Spanish Language—is trying to decide, he says, where he’ll live permanently. “I don’t know whether we want to remain in Spain where we’re living now,” he says. “I’m returning to Madrid to find a definitive accommodation. “Asylum is very difficult.”

Penguin Random House tells Publishing Perspectives that a contract has just been signed for an English-language translation of Tongolele no sabía bailar to be published in the States by McPherson & Company, likely near the end of 2022.

Ramírez: ‘The Suffering of the People’

On Sunday (December 12), Frank Jack Daniel and Drazen Jorgic at Reuters wrote up one of the latest concerns for the international community from Managua, with Nicaragua re-establishing ties to Beijing, abandoning its previous long-term relationship with Taiwan.

“Nicaragua’s decision to embrace China followed a slew of sanctions against aides to president Daniel Ortega following his re-election for a fourth consecutive term in a campaign steeped in the arrests of leading opposition figures,” Daniel and Jorgic wrote. “While Nicaragua’s case is ‘unique’ in Central America because of its increasingly authoritarian bent, the international isolation of Ortega played a role in his switch to China, according to a senior US official.”

Ramírez, foreseeing such moves by Managua when faced with international sanctions following the election knows a lot oabout the international isolation that Daniel and Jorgic are describing.

“I get to be part of the international community,” Ramírez says. “Ortega is isolated. This isolation is transformed into oppression inside the country. That oppression is not going to cease.”

On the other hand, Ramírez-the-statesman says, “That isolation actually has a limit. Because there’s some kind of duality in this politic of isolation.” And what he’s talking about represented by a reported package granted in August to Nicaragua by the International Monetary Fund to help with the economic impact of the coronavirus COVID-19 pandemic. However damning the rhetoric from the Biden administration may be, Ramírez says, Ortega has “access to international resources. While he’s receiving international money, he’s going to have a level of security. It’s enough for him.

And although the legislative assembly in Costa Rica—which was his home-in-exile during the Somoza regime—moved in September to make Ramírez an honorary citizen, the direction of things now, it seems, has persuaded the author to “put that ocean” between himself and Latin America, and to finalize his move to Spain.

Ramírez: ‘The Role of a Writer’ 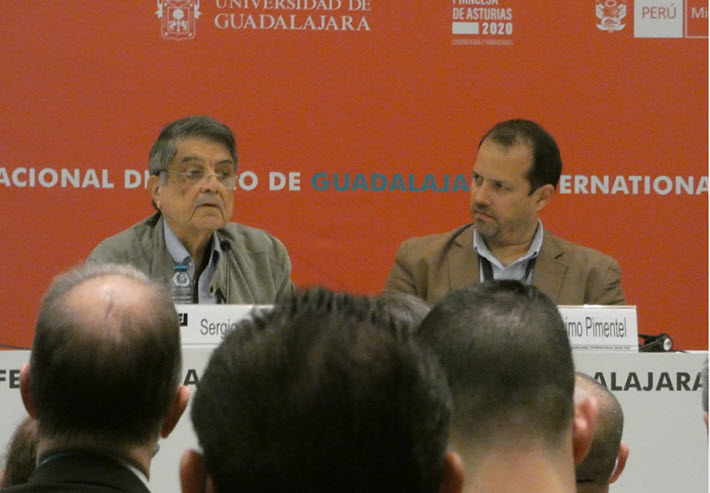 Authoritarians, Sergio Ramírez says, “do not have a sense of humor. And words hurt.”

Appearing as a speaker in the  International Publishers Association‘s (IPA) 2021 Prix Voltaire seminar at  35th Guadalajara International Book Fair, Ramírez refers to the long, “historical struggle in Latin America, not only incarceration or exile but also lives lost. The tyrannies of the southern part of the continent, which caused in Argentina so many ‘disappearances,’ dead journalists, assassinated writers.

“When you assume the role of a writer in Latin America,” he tells his audience—seated next to Jerónimo Pimentel, director general at Penguin Random House Peru—”you have two choices. You can shut up or you can write and speak up. I chose the second one. I really think there’s a responsibility far beyond just writing or creating images. If you have a voice, you need to use it.

“I chose this freely. I’m in that line of writers who are committed to a cause. And our intellectual tradition comes from Voltaire. I refer to him as the first in being aware of public causes.”

And in speaking to Publishing Perspectives, this author of more than 30 novels and short stories shows a lot of interest in how, at its founding, the United States was led by writers.

Ramírez describes this as the Latin tradition in which he has worked–both in fiction and in essays and columns. He’s the journalist and author co-existing in one creative intelligence. Most American politicians, if they produce books, are working in nonfiction to explicate their political policies. But Ramírez is a former vice-president best known today for his literary fiction.

He refers to Latin American military leaders of the past who would campaign with books in their saddles. “Some brought printing machines with them,” he says, “because ideas were very important.” So important that eventually military powers would appropriate them to their own ends. But the intellectual rigor that had underpinned this literary tradition in Latin America persisted.

And what remains today, he says, “is a kind of intellectual in Latin America who is always worried about public affairs. Carlos Fuentes. Mario Vargas Llosa. I would add José Saramago, who was always very vocal about public tolerance. And this is a way to press the public affairs and disunity of a country.

“There are writers too,” he says, “who remain in silence,” choosing not to work in the public-affairs and political sphere.

He stresses, however, that he doesn’t hold this against them. “That doesn’t make them worse writers,” Sergio Ramírez says. “Some are very good writers. It’s a personal choice.” 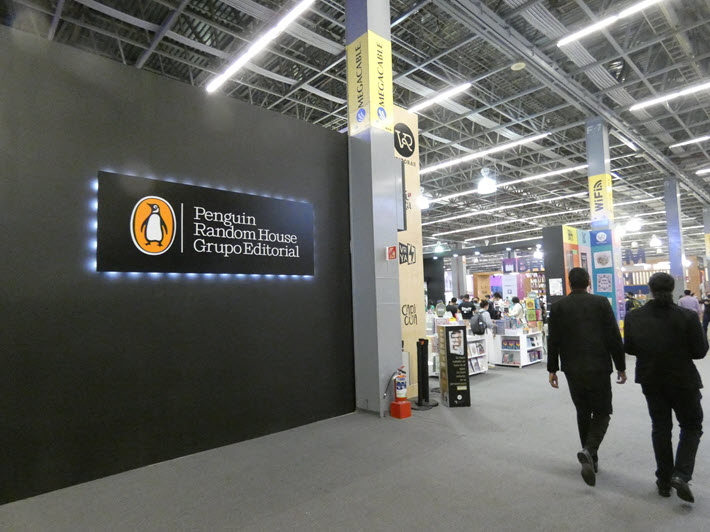