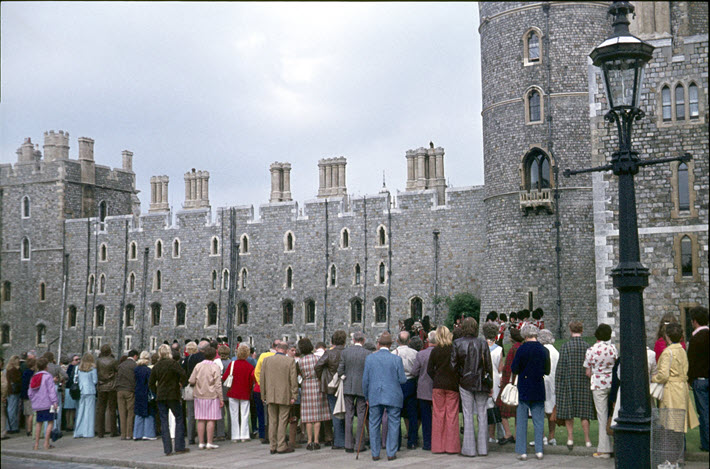 From publishing-house beauty contests to editor junkets and telephone calls limited to the afternoon, the industry has made some changes. 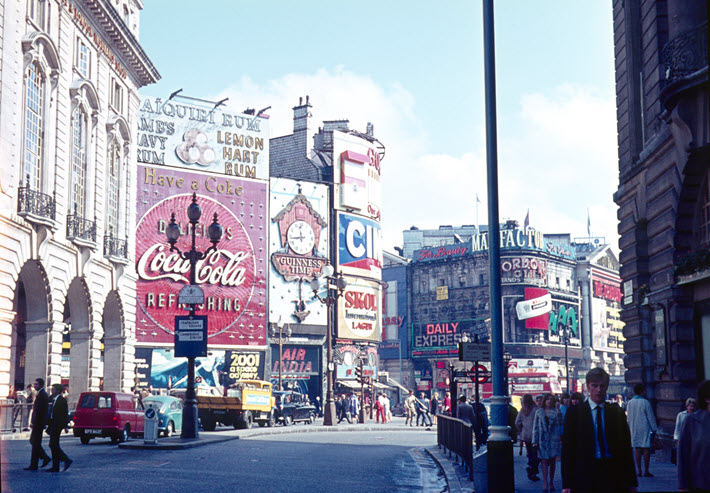 For Those Who think ‘Fings’ Never Change in Publishing 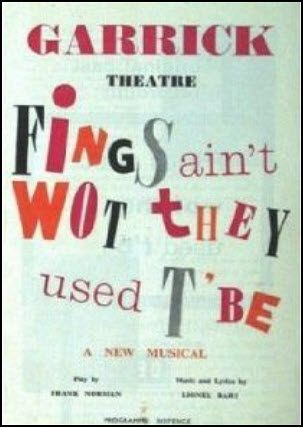 Our headline, Fings Ain’t Wot They Used T’Be, is the title of a musically unexceptional but lyrically relevant stage comedy from 1959—if you can understand the cockney dialect and British allusions.

It was written by the brilliant Lionel Bart of Oliver fame.

I thought you might be interested in the following publishing “fings” which “ain’t wot they used t’be.”

But I’d welcome suggestions of potential additions to this deeply incomprehensive and subjective list.

The image below is from the Pergamon Press in-house newsletter of 1974, a time when I worked there for the inestimable crook but brilliant publisher, Robert Maxwell. The idea of a Miss Pergamon beauty contest (see the upper right corner)—with an all-male jury—is impossible to imagine now.

The proportion of women in senior positions and throughout the industry has been an unmitigated blessing both to efficiency and profitability, not to mention morality.

Back then, the only role that was entirely female was that of the tea lady, now gone forever, thank God. 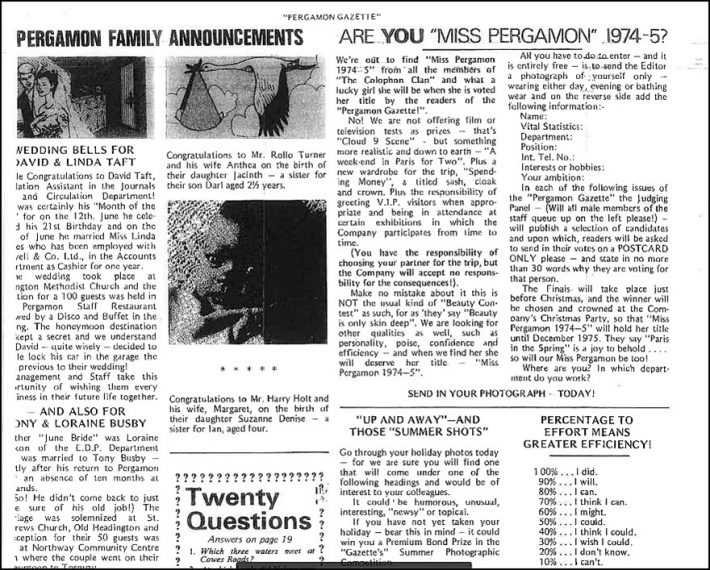 A page from the Pergamon Press newsletter in 1974. In the upper right, there’s a call for entrants in the ‘Miss Pergamon 1974-5’ contest. The prize was to be a weekend in Paris for two with a new wardrobe, spending money for the trip, and a ‘sash, cloak, and crown.’ Submission requirements included ‘vital statistics.’ Image used by permission of RELX

In 1975, when interviewing me for a job at Oxford University Press, the recently-appointed personnel manager asked me if I was, by any chance, of the “Jewish persuasion.”

He reassured me that it would be perfectly okay if I was, as they already had “one of them” on the staff.

Diversity is now a core objective of most publishers and while there may be quite a way to go, the profiles are significantly less white, less male, and less privileged than they were back then—which must be a benefit to business, customers, and society as a whole.

On the production front, the 1970s were a time of change from hot metal, letterpress, and sewn-binding printing to phototypesetting–and now, of course, digital–litho, and “perfect” binding.

There were many pitfalls along the way as we learned the new technologies and then, decades later, had to unlearn them. The one thing I remember above all else was that a correction on a proof cost £1 (£7.50 in today’s money, US$10.06).

Getting it right first time was an economic necessity. It’s now desirable but getting it wrong is more affordable.

At Oxford University Press in the 1970s and 1980s, business was conducted almost entirely by letter and typed memoranda.

There were occasional phone calls but this form of communication was slightly frowned on for reasons of expense. We were encouraged to make calls after lunch when there was a lower tariff.

Telex machines existed for urgent orders but mainly it was still the post. Letters were dictated, checked, and sent with two carbon copies, one for the file and one for circulation (the “third” copy) around the business to ensure that everyone knew what was going on.

Inbound editorial letters were opened by the publisher at a ritual known as “morning prayers.” Letters received were normally answered on the same day. While post was slower than email, in theory I am not sure it was that much slower in practice.

Book distribution, at its worst, took six weeks between order receipt and dispatch, and the cost was around 17 percent of revenue. “Fings” really have changed for the better.

Fortunately, most of the books sent out remained sent out as opposed to being returned within weeks of publication or in order to help a bookseller’s cash flow at the end of the financial year. This was a function of the rules set by the publisher, which made it hard to return a book and an understanding by the bookseller that it was their responsibility to sell the books they had purchased rather than taking the easy option of returning them to the publisher for credit.

I wonder whether the time has come for our industry to look again at whether we should move to a default position of non-returnability, which would have benefits for the environment as well as improving efficiency and reducing costs for all concerned.

There were two dominant trade unions in publishing and some others in the printing end of the business. Goodness knows how many hours were spent negotiating with these unions about increases in pay, fairness of job comparisons, working hours, holidays, pensions, and the rest.

The amazing thing is that, in spite of the decline of the influence and power of these employee unions, publishers are spending as much or more time in human resources matters than ever. Every effort to keep personnel departments small has failed and their growth has been matched only by that of legal departments which rarely existed at all before the 1990s.

What’s certain is that publishers now show much more respect to their employees and have developed flexibility to an extent inconceivable until the coronavirus COVID-19 pandemic forced us to change for the better.

Some things haven’t changed. Bestsellers made lots of money, the rest broke even or worse. But there have been significant shifts in sales channels, at least in the United Kingdom and I suspect worldwide.

The independent bookshop sector has been almost literally decimated. Public library purchases, the economic backbone of non-bestseller publishing, have fallen in real terms in the UK by 70 percent since 2000.

Even more dramatic, although perhaps less surprising, is the fall in reference-book purchases by 95 percent in the same period. Direct-mail book clubs have all but disappeared. I was co-chair of Book Club Associates in the early 1990s when in the UK, we had 2.5 million active and 1.5 million less active members internally known as “dead” or “resting.”

A Literary Guild main selection meant an order of 70,000 nonreturnable copies and even the smaller clubs—military history, sports, natural history, and so on—made many a special-interest title viable with orders of several thousand copies each.

All gone now, making the bestseller even more crucial to a publisher’s financial viability, if not its reputation.

Viewing the changing of the guard at Windsor, 1973. Image – Getty iStockphoto: Atlantic Kid

There have been literary agents since the beginning of time but a major and largely unnoticed change has been the almost universal shift from the standard commission of 10 percent of an author’s earnings to 15 percent and sometimes more.

I can’t think of any other part of the book value chain that has managed to increase its share by 50 percent, although a few very big retailers have tried and are getting close.

In addition, literary agencies have morphed from being an individual’s business or a small partnership into intellectual property corporations in their own right with all the consequential changes in administration and culture.

My predecessor, as medical editor at Oxford University Press, used to visit most of the branches of that wonderful global organization once a year. This took roughly three months and cost goodness knows how much, given that the trip included Australia, New Zealand, India, Pakistan, the United States, Canada, Nigeria, and East and South Africa.

The benefits to the business were intangible and certainly not measurable, but he had a marvelous time and he did manage to widen the list from a purely Harley-Street-cum-Guy’s-Hospital view of the medical world. This travel schedule was not atypical of the industry as a whole with a high proportion of trips coinciding with major sporting events in exotic locations.

Perhaps it’s still happening but I doubt it and COVID-19 and concerns about sustainability will surely reduce travel further.

When I started at the small, family-owned publisher George G. Harrap in 1972, they were at the point of introducing the first computer.

Its purpose, if I remember correctly, was to track expense claims. It was therefore treated with the deepest suspicion.

Then we had the generation of mainframe computers with dedicated huge air-conditioned suites, unlike the human beings in the industry who were obliged to sweat or shiver in their offices.

And these were swiftly followed by the desktop personal computer. I remember an IT director telling me in the 1980s that computers were then essentially built to crunch numbers but that the next iteration would be about crunching words. How right he was.

I suppose the underlying thesis of the song was that “fings” were better back then.

On balance, I think that “fings” may not be what they used to be. By and large, they’re much better. 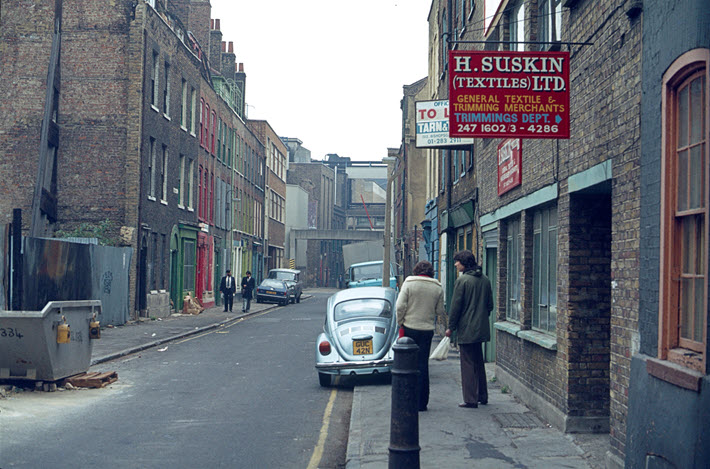