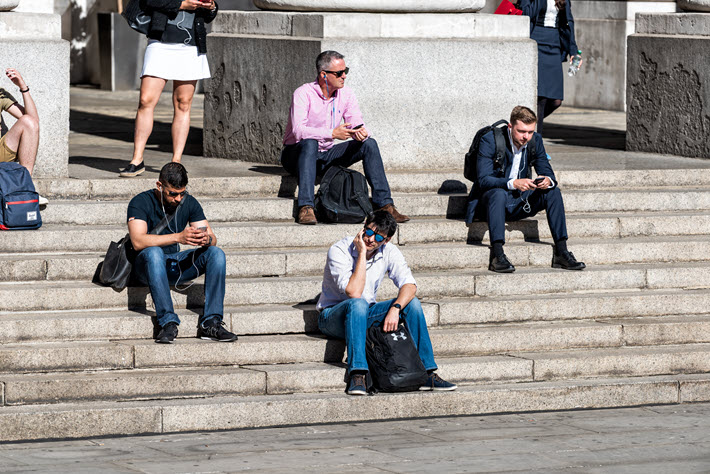 Audio consumers at the Royal Exchange in London. The new report from Nielsen cites audiobooks continuing to be ‘particularly popular among young males,’ although the heaviest users of the format are women. Image – Getty iStockphoto: KR Blokhin

A Seventh Year of Double-Digit Growth

On Monday, we looked at the newly released data from the United Kingdom’s Publishers Association, showing a huge jump in audiobook sales—71 percent—in the first six months of this year over the same period in 2019.

Today (November 30), we follow up with another report on audiobooks in Britain, this one from Nielsen Book UK, its sixth annual Understanding the UK Audiobook Consumer survey.

Not necessarily focused on so robust a bound as the big jump in two years’ time indicated by the Publishers Association’s material, the Nielsen report nevertheless asserts that “as the UK audiobook market continues to grow, consumers are increasingly listening to the format at home and for leisure and/or relaxation, more than making up for the drop-off in listening while commuting or traveling since the outbreak of the coronavirus COVID pandemic in 2020.” 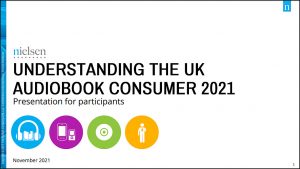 Field work for this report was conducted in August with some 2,000 UK adults aged 18 to 84, a sample designed to be nationally representative of audiobook listeners and buyers by age, gender, social grade, and region.

Care has been taken in this year’s report to match as carefully as possible the 2020 survey questionnaire to develop trend evidence reliably, while some new questions were introduced to gauge some of the impact of the COVID-19 health crisis—particularly in the area of changes in sources for purchasing audiobooks as well as print and ebook editions of the same titles.

Overall, the British market projects that 2021 will be a seventh year of double-digit growth in volume of purchases of audiobooks. The aggregate buy represents some 25 million units at a value of close to £200 pounds (US$266.9 million). 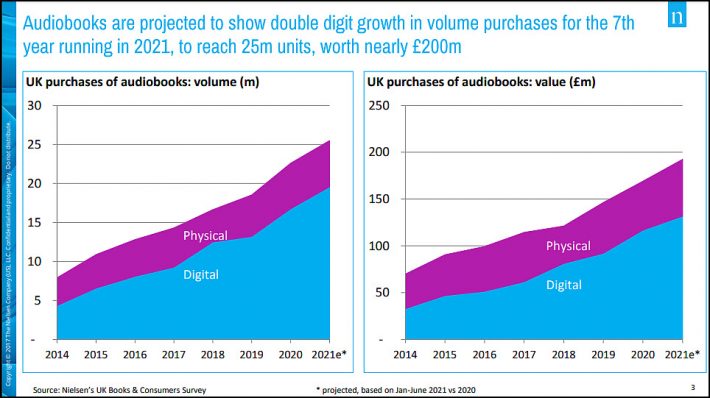 And we did put to media manager Philip Stone the same question we asked of the Publishers Association’s Jasmine Joynson for Monday’s report: what is the market share of audiobooks, compared to other formats? Stone responded with a helpful five-year tracker of figures, showing audiobooks to hold, overall, an even smaller proportion of the market than the Publishers Association estimates they hold. Having stood at 3.6 percent of volume (of sales) in the market of 2016—and at 4.2 percent of value that year—the 2020 ranking shows audiobooks at 6 percent of sales volume and 6.4 percent of value.

Neither the question nor these answers are meant to be derogatory of the strong dynamic that audiobooks hold in the British market, but just to keep some perspective on the fact that despite such strong and welcome growth over these years, the downloadable and/or streaming audiobook sector still is quite small in the wider book market as a whole. This could well change. Indeed, as many who understand the force of visual and audio culture in this and other English-language markets, it seems likely that audio content will continue to expand its presence among its sister formats. 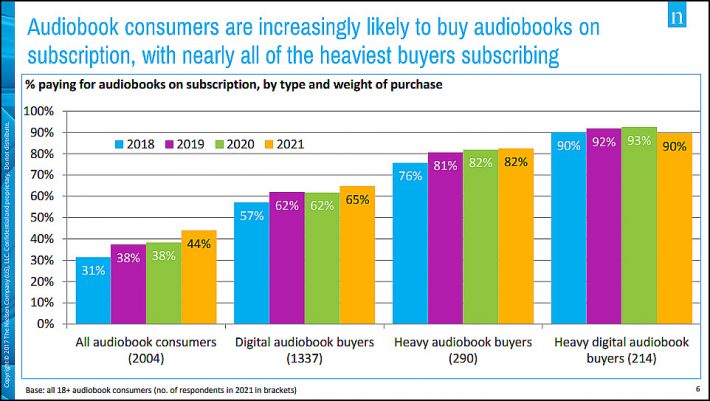 A point of interest to many will be the rising trend toward subscription in audiobook buying, as tracked by Nielsen from 2008 in the chart above. This favors the approach led by Storytel and many other subscription models, and is not necessarily the model preferred by some publishers. Those users classified as heavier buyers of digital audiobooks appear to be quite solidly in favor of subscription.

In its discussion of findings for its Understanding the UK Audiobook Consumer survey, Nielsen’s team reminds us that lockdowns in the United Kingdom did not end with 2020.

“Together with things like curiosity, multitasking, and the appeal of narration,” Nielsen’s discussion has it, “this has helped drive double-digit growth in audiobook purchasing for the 7th year running,” as we noted above. 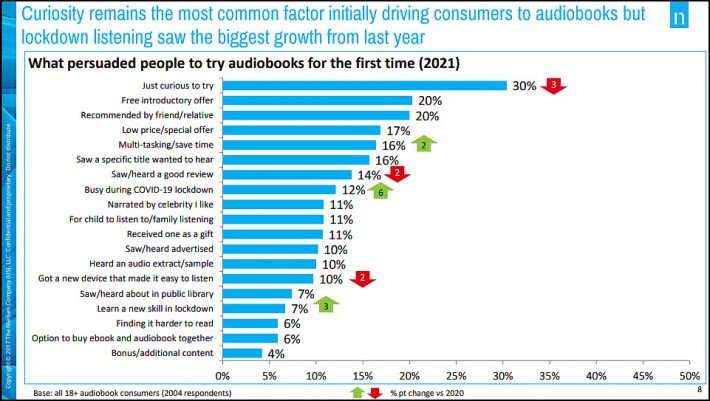 Especially encouraging in Nielsen’s report is that the downloaded audiobook format “remains particularly popular among young males, who tend to appreciate the benefits of narration, finding it easier for taking in information and learning than reading books.” Anything that can bring more men and boys to reading is something the world industry wants to encourage. The leadership of women consumers in the market is highly prized but at times, more could be done to encourage male reading, as well.

On the other hand, the researchers say they find that, “Heavy buyers are increasingly likely to be female, and new listeners in 2021 were especially likely to be women aged 18 to 34.” Looking more closely:

Women seemed in the survey to be making a move toward nonfiction in greater numbers than before, Nielsen says, so that nonfiction and fiction audiobooks were also on a par for younger women surveyed.

Indeed, “While nonfiction has been particularly important for growth in the audiobook market in recent years,” the Nielsen team writes, “fiction genres still take the top spots in terms of overall popularity, with YA and romance favored by younger women, crime-thrillers and popular fiction most popular for older females, and science-fiction, fantasy, and crime preferred by males, as seen in the chart below.

“Moreover,” the team reports, “consumers indicate that it’s fiction, more than any other type, that they’ll be more interested in listening to over the next 12 months.”

More from Publishing Perspectives on the United Kingdom’s market is  here, more on the work of Nielsen Book is here, more on the digital acceleration observed in pandemic conditions in many book publishing markets is here, and more from us on audiobooks is here.