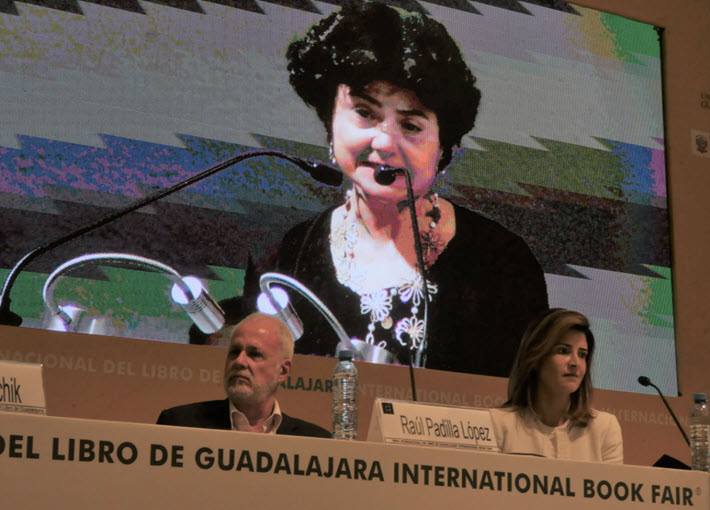 ‘Tonight, Lokman and Lebanon are having a drink with Voltaire,’ the Prix Voltaire laureate Rasha Al Ameer tells her Guadalajara audience. She is the sister of the slain Lebanese publisher Lokman Slim. 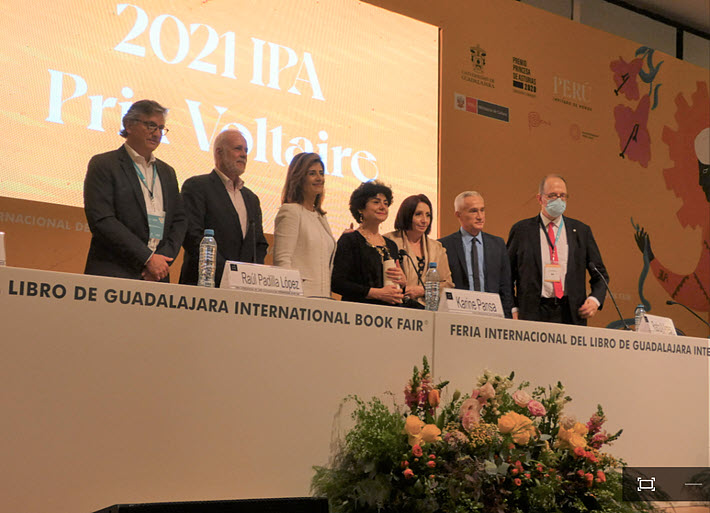 Al Ameer: ‘Having a Drink With Voltaire’

In Guadalajara tonight (November 30), the 125-year-old International Publishers Association (IPA) in association with the 35th Guadalajara International Book Fair, has formally conferred its 2021 Prix Voltaire on what may be the award’s most eloquent recipient yet.

The custom of the Prix Voltaire is to name the publishing house involved in an award. But Dar Al Jadeed‘s co-founder Rasha Al Ameer spoke with such grace, urgency, and bravery amid her palpable grief over the assassination of her brother and co-founder Lokman Slim, that the packed Juan Rulfo Auditorium at the book fair was transfixed.

Al Ameer has a great deal to say to world publishing.

Juergen Boos, Frankfurt’s president and CEO traveled from Germany to be in the audience tonight for the ceremony. And he was one of the last to leave the Rulfo Auditorium this evening, staying close to Al Ameer, speaking to attendees.

Al Ameer: ‘Lokman and Lebanon Were Both Betrayed’

After the ceremony, Al Ameer told Publishing Perspectives that the authorities in Lebanon actually know the perpetrators of Slim’s death, but that in the long-running collapse of Lebanon’s civil authority, the courts are unable to move on the case. Such events as Slim’s killing somehow are “protected,” she said. This means, of course, that in terms of normal legal recourse, the doors are slammed shut. She literally has no court of appeal.

“Voltaire is saying that it’s clear that an individual who persecutes a man, his brother—or his country—because he’s not of the same opinion or same values, is a monster.”Rasha Al Ameer

Lebanon itself and its leadership may have few spokespeople to match her.

Al Ameer speaks in devastatingly strong, measured English about the cruel corruption perpetrated by her “tiny country’s” political apparatus and the associated political forces that the government itself has said were behind the murder of her brother.

“Ladies and gentlemen,” Al Ameer said, after taking a long, aching breath at the podium and steadying herself when handed the certification of her award by IPA’s Karine Pansa, “tonight my brother and Lebanon share something.

“They were both betrayed. Lebanon and Lokman. And their killing is not an ordinary crime.

“Tonight, Lokman and Lebanon are having a drink with Voltaire. The three of them look at us and smile. Voltaire is saying it’s clear that an individual who persecutes a man, his brother—or his country—because he’s not of the same opinion or same values, is a monster.”

The ease with which Al Ameer was able to cut down ideological intolerance and political violence, the Lebanese regime, and the nightmare of her brother’s loss made it clear that this small but powerful thinker is probably the most articulate Prix Voltaire laureate named yet.

The award, as our readership knows, honors publishing valor in the face of oppression.

Our coverage of the IPA Freedom to Publish committees selections is tracking the formation of a new pantheon of courage, raising to international visibility these publishing leaders who are hounded, persecuted, often jailed, and sometimes killed for publishing the truth, speaking to power, unmasking authoritarianism.

The award carries a purse of 10,000 Swiss francs (US$10,760). Kristenn Einersson of Norway is the committed, longtime chair of the IPA’s Freedom to Publish committee and was unable to be in Guadalajara tonight, sorely missed.

And this year, the committee opted to create a special award, in addition to the main award for Al Ameer and Dar Al Jadeed: IPA has honored the late Chinese author Li Liqun, whose pen name is Li Huizi. He was an Independent Chinese PEN Center member who took his own life on July 23.

Ramos: ‘The Worst Censorship? When They Kill You’ 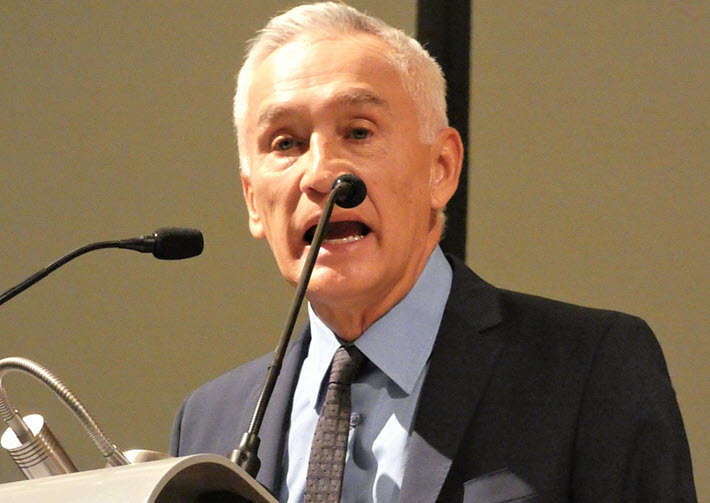 Followed worldwide for his unflinching reporting, the Miami-based Univision news anchor Jorge Ramos gave the ceremony’s keynote address, which would end with him tenderly saying to Rasha Al Ameer, onstage, “I do not exaggerate by saying that we are here because of your courage and that of your brother Lokman.”

“There is a beautiful word in Spanish that defines our job as journalists, editors, and publishers: contrapoder. We always have to be on the other side of power. And this means that, on many occasions, we have to take a stand.”Jorge Ramos

Ramos reminded the Guadalajara audience that he is a son of Mexico. He immigrated to the United States when the news medium he was working for in 1983 demanded he change a report to please the political powers of the moment. He refused and resigned, newly exposed to the treachery of censorship.

A frequent commentator on CNN and other legitimate news outlets, Ramos has become a go-to expert on the Latin American political landscape. He reminded the crowd tonight that he had challenged both Donald Trump and Venezuela’s Nicolás Maduro in person. Trump had him removed from a press conference, and Maduro had him kicked out of Venezuela after a brief detention for him and his crew. He pointed out that his dual Mexican and United States passports may well have played a role in the fact that he was released.

“You see,” Ramos said, “Trump and Maduro—leaders representing the extreme right and the extreme left—acted exactly the same way. Violently. Without tolerance. Lying shamelessly. Trying to impose their point of view. But our journalistic duty was to confront them both.

“And this is important: behind me there was a news director and a company that always supported my work. Without them, I couldn’t have asked those questions.

“There is a beautiful word in Spanish that defines our job as journalists, editors, and publishers: contrapoder,” Ramos said. “We always have to be on the other side of power. And this means that, on many occasions, we have to take a stand.”

This, of course, is the position of a publisher, and Ramos, who delivered most of his comments in English, saved his most resonate fury for the disastrous track record that his native country Mexico holds, in terms of journalists’ killings.

Switching into Spanish, Ramos told his own people, “Mexico is one of the most dangerous countries in the world to be a journalist.

“There are years in which more reporters have died in Mexico than in war zones. In 2020, Mexico was the most violent country on the planet for journalists, more so than Afghanistan, according to the Committee to Protect Journalists.

“And here,” unlike in the United States, his adopted home, “there is no government to protect them. Since 2000 until now, 145 journalists have been murdered in Mexico, according to the organization Article 19. And since López Obrador came to power, 25 press workers have been killed. Impunity is almost total; there are no arrests for most of these murders,” a comment that directly echoed what Al Ameer would tell us about the situation in Lebanon.

“The most dangerous thing that can happen to us,” Ramos said, “is that we believe that this is normal, that we get used to it and that we do not press for things to change soon. This is not normal. It is not normal that journalists are killed in Mexico just for doing their job.

“It is time that the murders of reporters stop being news,” Ramos said. “We cannot be neutral in this.”

And this was his message, Al Ameer’s message, and the message of the International Publishers Association and its Prix Voltaire tonight: Those who publish, who work in truth for a living, whether in books or in journalism or in other sectors, simply cannot be neutral in this era when so many democratic principles are under attack in so many places, the freedom of speech and publication frequently being the first to go.

“That’s what we do,” Ramos said before handing off to Al Ameer. “Doctors save lives. Architects and engineers build sustainable structures. And we ask tough questions. To the powerful.” 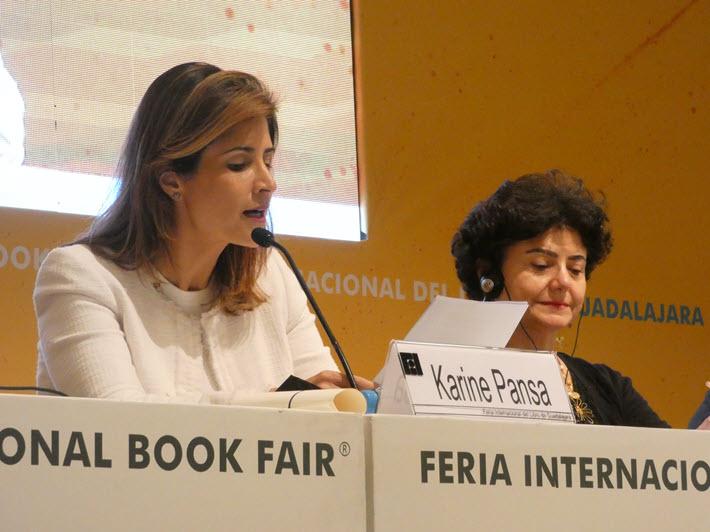 As Publishing Perspectives readers will recall, the 2021 shortlist for the Prix Voltaire has  been especially rich in talent and commitment, particularly with its inclusion of unnamed (for security) publishing houses experiencing harassment and danger under the Belarusian regime of authoritarian strongman Alexander Lukashenko.

As our readers know, F&G Editores of Guatemala City and its publisher Raúl Figueroa Sarti have won this year’s Freedom to Publish Award from the Association of American Publishers (AAP)—a member-publishing organization of the IPA. 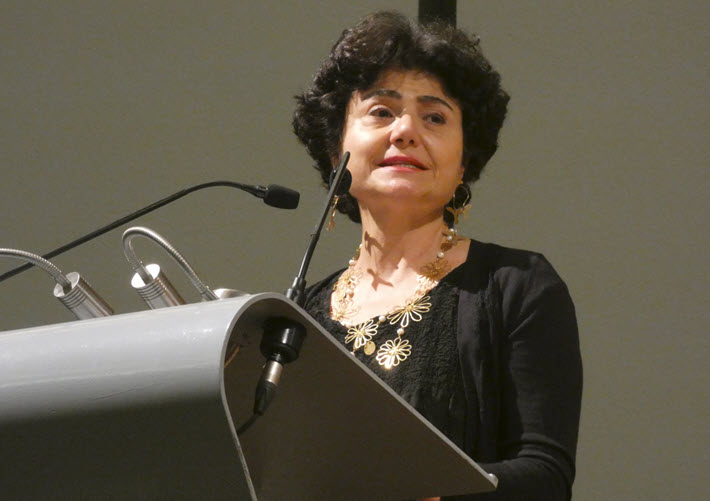 Publishing Perspectives will have more from the activities around the IPA’s Prix Voltaire at Guadalajara International Book Fair in upcoming editions.