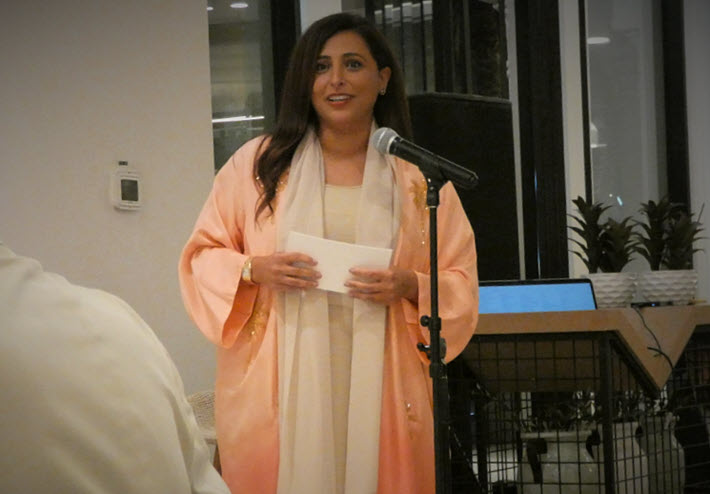 ‘Sometimes we can become prisoners of our preconceptions,’ the International Publishers Association’s Bodour Al Qasimi tells her colleagues in Sharjah. ‘My hope is to open doors.’ 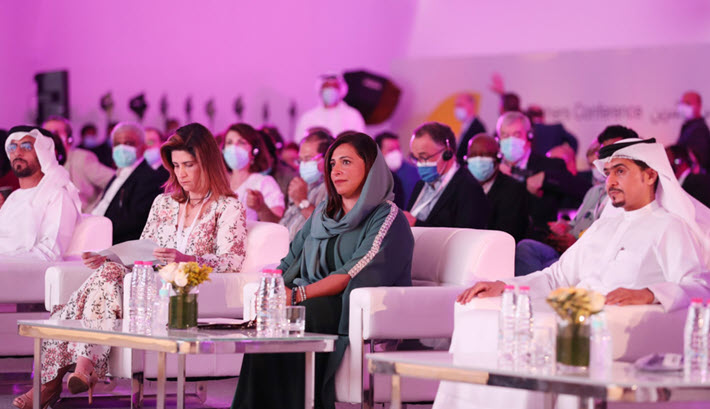 Al Qasimi: ‘A Double-Edged Sword in Some Respects’

During this week’s Sharjah Publishers Conference, which precedes the Wednesday (November 3) opening of the 40th Sharjah International Book Fair, the International Publishers Association (IPA) president Bodour Al Qasimi spoke to the issues of diversity, equality, and inclusivity that have become central to many discussions in world publishing.

As a publisher (Kalimat Group) in the UAE’s third emirate, Al Qasimi is a singularly charismatic figure in the week’s key events here, as some 550 participants in the conference’s professional program and rights-trading center set new records for attendance and business “matchmaking” dynamics.

Al Qasimi is the second woman president of the association in the modern era, Ana Maria Cabanellas of Buenos Aires’ Grupo Editorial Claridad being the first and only other female president of the IPA.

Al Qasimi: ‘I Know We Will Overcome Those Challenges’

When she held a publishers’ welcome dinner this week in Sharjah, Al Qasimi spoke to the group about a question she’d had from a colleague, the publisher Ricardo Sánchez Riancho, director general at Mexico City’s Textofilia. Sánchez Riancho is here with us, an engaging conversationalist among his peers.

“Ricardo asked,” Al Qasimi said, “‘So does your being from your background help or hinder you in your work in the publishing industry?’ I was glad he asked me this question.

“Through the work I do, I’m trying to demystify any notions about people from my background.”Bodour Al Qasimi, IPA

“My answer to him was that being from my background is a double-edged sword in some respects, especially for someone like me who has a genuine passion and purpose to try to add value to this world during my lifetime through books, publishing, reading, and literacy.

“I’ve been fortunate,” she said, “in the opportunities I’ve had in life, but there have been occasions when I’ve been subject to prejudice.

“At such times, I try to remind myself, as a publisher and a human being, that no one should ‘judge a book by its cover.'” As she flashed a weary smile, she got a chuckle at the familiar line and a round of applause from the publishers gathered for dinner.

“Sometimes we can become prisoners of our preconceptions,” she said, “which hinders us from seeing other people for who they really are. It can prevent us from seeing what they’re going through, their struggles, their ups and downs, the unexpected twists and turns in their lives and their hard-earned achievements.

“And what I said to Ricardo,” Al Qasimi said, “is that through the work I do, I’m trying to demystify any notions about people from my background. And most importantly, I’m trying to focus on doing the best work I can possibly do with a strong work ethic.

“It’s natural for us as publishers to focus on bringing in more diversity and inclusivity, so that we can mirror the societies we want to help create from the words we publish.”Bodour Al Qasimi, IPA

“My hope is to be able to open doors for other people and inspire the younger generation to embrace their uniqueness and to make a mark, big or small, in this world in which we all live.

“So thank you again, Ricardo, for that interesting question. We all know that being different or unique should be celebrated by our industry. Our role is to give a voice to everyone. So it’s natural for us as publishers to focus on bringing in more diversity and inclusivity, so that we can mirror the societies we want to help create from the words we publish.

“I enjoyed the discussions today” in the ongoing Sharjah Publishers Conference, “and I’m sure that conferences and meetings like this are always helpful in uniting publishers’ voices and unifying our efforts to create more growth for our industry in the future.

“I know we have challenges ahead of us,” Al Qasimi told the group, “but when I see you all in every event, with your energy and determination, I know that we will overcome those challenges.”

On the sidelines of the Sharjah Publishers Conference and networking schedule, Al Qasimi is continually asked for a photo: selfies are captured, television interviews are taped, warm greetings are exchanged as so many players in the international book business carefully begin to travel and gather again.

In tackling her two-year term at the helm of an organization so long led by men, Al Qasimi leads with unhesitating honesty. Having established the PublisHer networking organization for women in publishing, she always addresses the challenges women face in the business with more resolve than rancor, more offers of solutions than blame.

She’s also distinguished for the fact that she’s from a nation on the eastern end of the Arabian Peninsula. The still-young United Arab Emirates’ drive to establish itself on the world stage clearly is well-served by having such an articulate and magnetic personality in international cultural and business circles. But of course, there are those who don’t expect to see an Arab woman leading the primary international organization for book publishing.

And she’s a member of Sharjah’s royal family. Here in the emirate, she’s the Sheikha Bodour bint Sultan Al Qasimi, as well as a wife and a mother, a businesswoman, and the indispensable steward of the literature-focused policy of her father, the Sheikh Dr. Sultan Bin Mohammed Al Qasimi, Sharjah’s ruler—and an author, himself.

The regal distance of royalty isn’t necessarily the easiest fit in a publishing leadership position. For all its transformation in the past decade, book publishing remains a highly social industry, much of its business resting on personal relationship and face-to-face encounters. Trust is a key factor, goodwill is prized among business associates as well as longtime friends.

And so Al Qasimi’s unfailingly welcoming character is proving a major boon to the Geneva-based IPA, which is celebrating its 125th anniversary as an NGO in fast expansion, its member-associations numbering nearly 90, from more than 70 nations. 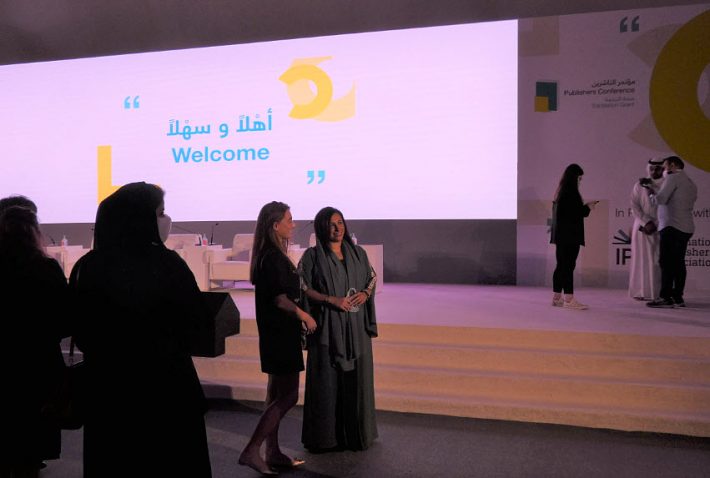 Bodour Al Qasimi during a break in the programming at the Sharjah Publishers Conference, October 31. Image: Publishing Perspectives, Porter Anderson