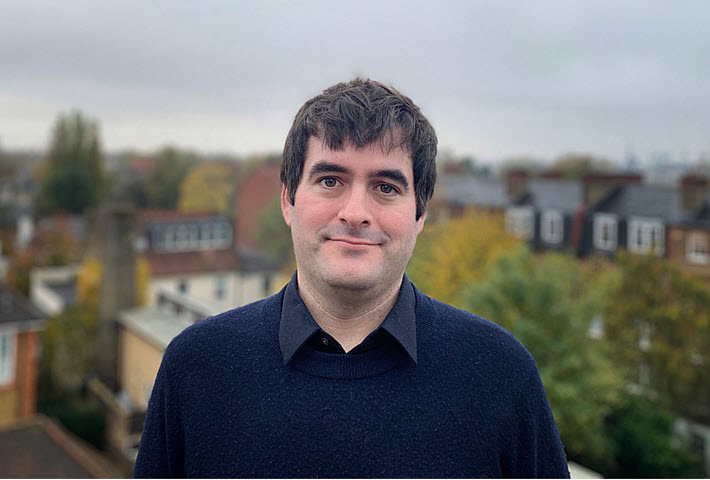 Purcell: ‘Everyone Has Adapted’

The chief of Amazon Publishing for the United Kingdom and Germany, Eoin Purcell concedes that when it comes to embarrassments of riches, “Two surprise books lead to a lot of questions.”

Not that he’s complaining. But a trade house the size of the 16-imprint Amazon Publishing doesn’t just toss in a couple of unexpected titles when an author attaches the manuscripts to an email.

“It’s been it’s been super interesting for us,” Purcell in London says in an interview with Publishing Perspectives, “to see how authors have responded [to the pandemic]. Some of them have really ramped up their writing pace. So they now have two books more than they were planning to have at this stage. And they’re, like, ‘What do I do with these? Do I publish them? Do we wait?’

“It’s a great conversation to be having when you’re when you’re dealing with great authors, but it’s a super interesting one, because, you know, the publishing process is a very planned one.”

And the fact that some authors have hit such high levels of production during the still-ongoing coronavirus COVID-19 pandemic may come as a surprise to some observers. In a June 2020 video conversation arranged by the International Publishers Association with Publishing Perspectives, the problem of “hidden impact” for writers was voiced by John Degen, the Toronto-based chair of the International Authors Forum.

“There’s this funny sort of meme on the Internet,” Degen said, “that says authors are natural introverts. So being locked down in our homes, this is the perfect opportunity to work on a book. But it ignores the fact that authors now are taking care of kids who aren’t in school, taking care of parents who are incredibly vulnerable. And so I’d say that productivity is probably way down.”

As the pandemic conditions have evolved, however, Purcell says, “It’s fascinating to see the way different folks have adapted. Not just writers but everyone has adapted in their own way. Folks have eventually found the right pace for them. There are a few who’ve had trouble getting what they expected done, too. But for the most part, the question we have is, ‘What would you do with another book I’ve written?’ rather than ‘I haven’t got the book we planned.’

The Character of a Pandemic: ‘Intensity’

Eoin Purcell, an Irishman in England who founded The Irish Story magazine and ebook press, was named to lead Amazon Publishing’s big London installation in 2014. In his then-frequent commentary on world publishing, Purcell had foreseen the potential for Amazon to “ramp up their publishing schedule up until they are publishing hundreds of books a year.” As many were focused on the rise of Kindle Direct Publishing, the self-publishing platform, Purcell was watching the trade house develop. It would end up in a leadership role as “the Big Sixth,” as some see it today.

“Customers responded” as entertainment consumers to pandemic conditions “by doing more of what they loved. That’s what we saw.”Eoin Purcell, Amazon Publishing

Now, those familiar with his capacity to see around the going wisdom to a more nuanced view of things will be interested to learn that Purcell talks less about the pandemic’s “digital acceleration”—after all, Amazon is, itself, a digital accelerator—and more about intensity when he describes fundamental elements of the contagion’s impact on the business.

Something that helps Purcell understand various consumer reactions to publishing under the contagion is that his house is a component of an entertainment conglomerate. Unlike even some of the largest book publishers, he sits very close to other major media.

“I still don’t know what that means,” he adds quickly. “Are we post-pandemic yet? Are we mid-post-pandemic? I’m comfortable saying that we’re probably coming into a different phase and I just don’t know how that’s going to look. I suggest you come back and ask me in a year’s time or six months’ time.” (And we will.)

For now, Purcell says that he and the company feel good about where things are. “We continue to be happy with the books that we’re publishing and with the outcomes for the authors, and that’s the most important question for us,” he says. “If it were a case where I was seeing outcomes that that weren’t what I was trying to deliver for our authors anywhere, then I’d be worried. But we continue to see the types of results we’d expect.”

Like any good publisher, Purcell quickly concedes that there are always those titles that can go south on you despite all hopes to the contrary.

“Obviously, sometimes you do better than than you think you will, and sometimes you do worse,” he says. “That’s the nature of publishing. We have no magic eight ball that’s going to tell us exactly the outcome for every title. But on balance, we’re happy with the way readers are responding to our authors’ books, and we’re really happy with the relationships we’ve built with our authors and our translators and the direction those are going.”

This season, one of the key issues for publishers we’ve covered is a trend toward lowering title output—and not always simply because pandemic retail scenarios prompted book-release delays or cancellations. Publishing Perspectives readers will remember our Frankfurt Conference discussion with Germany’s S. Fischer Verlage publisher Siv Bublitz, who was well ahead of the pandemic in making substantial cuts to the volume of titles that Holtzbrinck’s Fischer was producing so that more support for both authors and marketing their books could come into play. 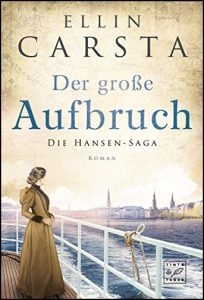 Amazon Publishing, by contrast, operates at such scale across so many borders that such marketplace and output decisions are understood a different way.

“We’re constantly making decisions about what’s the right level of publishing across our business,” Purcell says. “Sometimes that’s up, sometimes it’s down, depending on the year.

“We’re fortunate that we’re part of the large global entity that’s Amazon. That gives us a unique ability to make decisions that are global for authors and for the content. The really important thing about that is that we also have editors in the locales where we’re publishing. So while we have this infrastructure that enables us to take these decisions that are global, we can also understand the trends in our locales and make the right decisions for them.”

In an echo of what you often hear from Gabriella Page-Fort, the editorial director of APub’s translation division, Amazon Crossing, Purcell talks about strong storytelling as the real wind beneath a book’s  international wings—a stronger factor than, say, genre.

As an example, he points to Der Spiegel-bestselling author Petra Mattfeldt whose pen names are Ellin Carsta and Caren Benedikt. Her series Die Hansen-Saga takes readers through a family’s emotional journey in eight installments, starting in 1888 Hamburg. The series capper, Der Grosse Aufruch (The Great Departure) was released in August. 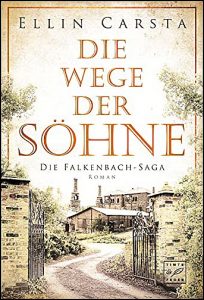 Industry wags who like to collect book covers depicting women contemplating bodies of water will have a field day with this series. Seven of the eight covers nail the meme, and even the estate lawn on the cover of No. 6, Der nahende Sturm (The Approaching Storm) features a handsome fountain with a pool suitable for wistful gazing. But before diving in for laughs about hackneyed visual motifs, it’s worth noting that Mattfeldt’s eighth Hansen book alone is drawing average customer scores of 4.5 across almost 9,000 ratings.

The author’s new series, Die Falkenbach-Saga is located on the shore of Lake Starnberg in Bavaria in the 1930s. In that series, two wealthy factory-owning families fight among themselves about how to position themselves against the coming Nazi regime to save their families’ values and wealth. The fourth in that series, Die Wege der Söhne, is set to release on December 7.

Many of our readers will remember the late-September campaign launched by the Society of Authors with translator Jennifer Croft and author Mark Haddon, calling on translation publishers to name #TranslatorsOnTheCover of published titles. 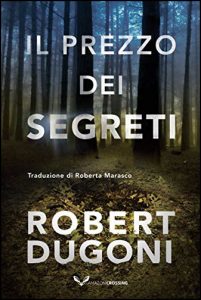 Purcell’s’ team points out that Amazon Publishing is a staunch proponent of this approach, naming translators on all pertinent book covers and paying translators a royalty across imprints and all locales in which a title is published.

Here, for example, is Il prezzo dei segreti (The Price of Secrets), an Amazon Crossing Italian translation by Roberta Marasco of Robert Dugoni’s A Steep Price. And Marasco has her credit on the cover.

The international range across which Amazon Publishing works means that some far-flung cross-cultural capability can sometimes be found on its lists.

It turns out that this is one of Purcell’s favorite elements of his publishing house’s capabilities.

Eoin Purcell points to the Scottish author Tariq Ashkanani and his Welcome to Cooper, a debut thriller set in rural Nebraska. Purcell talks about its “twisty narrative” and the “broad connection to readers across the globe” that Amazon Publishing can give to authors who may indeed be local but not necessarily local to the “classic American thriller,” as Purcell describes it, that Ashkanani is writing in that case. 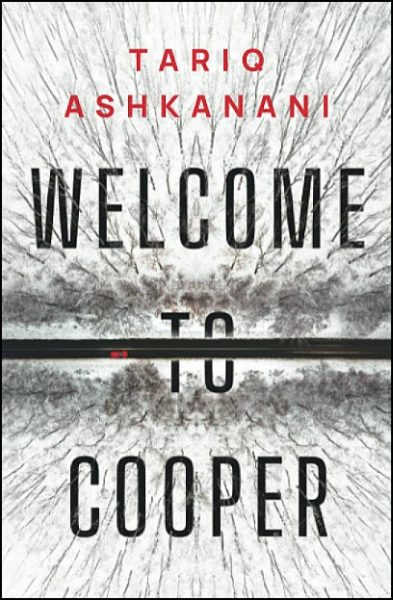 It’s “that kind of global platform,” he says, that Amazon Publishing offers, even as he marvels aloud at how some of these writers are able to capture convincingly the finer points of cultures that may not be at all local to them.

“Sometimes little things can trip you up. Small word usages that readers spot instantly and are more than happy to tell you about, little cultural touch points that don’t work across across locales. It’s something we’re fortunately able to experience across multiple languages and multiple accounts–something we spend a lot of time thinking about.”

Purcell also mentions writer Anna Karolina’s new Ebba Tapper series, Auf tod komm raus, the first installment of which has been released in Germany with an English translation anticipated a year from now.

And he mentions Kennedy Ryan, who became in 2019, the first Black woman to win a RITA Award from the Romance Writers of America. As it happened, Ryan won in the last round of the awards to be staged. By 2020, the 29-year-old prize program had been canceled amid controversies around what many saw as a lack of diversity.