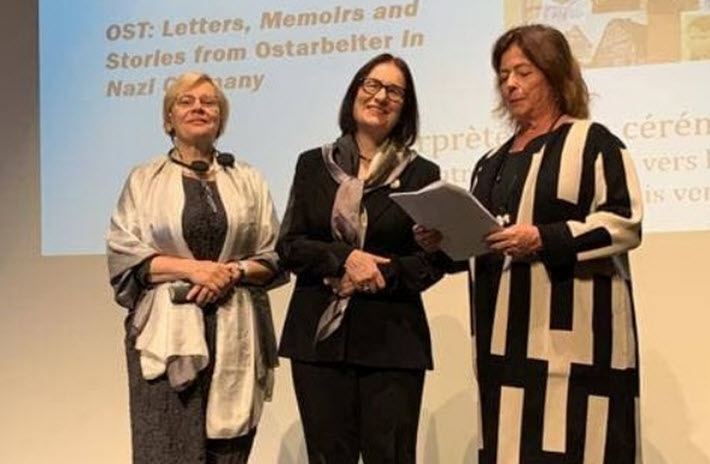 Vera Michalski, right, awards the 2021 Jan Michalski Prize for Literature to the team behind ‘The Sign Will Not Be Erased.’ The two team members onstage at the Michalski compound in Montricher are the philologist and Gulag History Archive curator Irina Ostrovskaya, left, and historian, translator, and philologist Irina Scherbakova in the center. Image: Fondation Jan Michalski

This morning at Montricher near Lausanne, the Jan Michalski Prize for Literature 2021 has been awarded to the Russian human-rights-defense organization Memorial International and a quartet of contributors: Alena Kozlova, Nikolai Mikhailov, Irina Ostrovskaya, and Irina Scherbakova. They receive the Fondation Jan Michalski prize’s purse of 50,000 Swiss francs (US$53,616).

Their work was originally published in Moscow in 2016 as Знак не сотрется. Судьбы остарбайтеров в письмах, воспоминаниях и устных рассказа. It’s translated from Russian by Georgia Thomson as The Sign Will Not Be Erased: Letters, Memoirs and Stories from Ostarbeiter in Nazi Germany. And Thomson’s English-language translation was released on Thursday (November 18) by Granta Books at 496 pages.

The book, as the Michalski jury puts it, goes about “restoring the historical truth through this reference book” which documents “the destiny of millions of Ostarbeiter.” The work, the jury says, “accomplishes the complex task of preserving oral history from obliteration and misappropriation.

“By providing a written record of the voices of civil society in a situation where history is rewritten according to political context, the work OST creates an essential memorial for the future of our society which must preserve the memories and use them well in order to confront their current challenges.”

In case the term Ostarbeiter is new to you—its root, of course, is the word ost, for east, and it stands for a sector of Nazi atrocities perpetrated on “foreign nationals”: forced labor by people whose ethnic backgrounds were primarily Ukrainian, Polish, Russian, and/or Belarusian. We quote from Granta’s explanatory material about the book:

“An Ostarbeiter was an ‘Eastern worker,’ rounded up by Nazi Germany from the captured territories in Central and Eastern Europe. 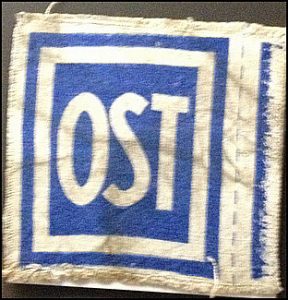 A patch used by Nazis to identify the Ostarbeiter, ‘eastern workers’ forced into labor often at ages younger than 16. Image – CC BY SA3.0

“By the end of the war, it’s estimated that approximately 3 million to 5.5. million Ostarbeiter were forced to work in guarded work camps. Many of them were younger than 16, at which age they’d be conscripted for military service.

“Ostarbeiter worked 12 hours a day on starvation rations. As ethnic Slavs, they were treated with extraordinary brutality by Nazi guards who considered them ‘subhuman’ by the standards of the Aryan master race. They were distinguished by the label ‘OST’ sewn onto their uniforms.”

In the discussion of the topic provided today by Vera Michalski’s always perspicacious team, we read, “As well as being taken from their families and distinguished from other compulsory workers by the badge OST sewn onto their clothing, they encountered working conditions closely approximating slavery—hard work, living in closed camps under constant surveillance, undernourishment, lack of hygiene and care, humiliations and punishment despite a few acts of kindness from German civilians. 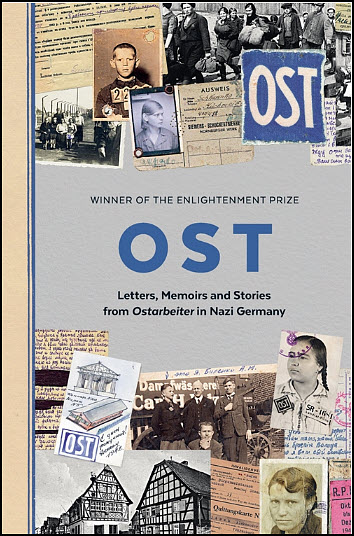 “Almost half of these adolescents were girls who were also subjected to sexual violence, from which arose tens of thousands of unwanted pregnancies. Many died of starvation, exhaustion, and bombing raids as they were not allowed access to bomb shelters, or from other abuse when they were not simply executed by their Nazi camp guards.”

After the war, many were repatriated into Soviet Russia where they often were accused of having collaborated with the Nazis, finding themselves subjected to new abuse and punishments, with some sent to gulags for “re-education.”

As the Michalski Foundation points out, “It’s only since the 1990s that the question of the Ostarbeiter has found its place on the public stage; first through the initiative of the Greens in the German Bundestag before the Russian non-governmental organization set out to have them recognized.”

The work previously has won the Enlighteners Prize at Art Space in Moscow.

Since 2018, a traveling exhibition Postscriptum: Eastern Workers in the Third Reich, has been helping to widen awareness of the Ostarbeiters’ ordeals at the hands of those who participated in their suffering. We’ll embed for you here a video produced as part of that exhibition.

More from Publishing Perspectives on Fondation Jan Michalski is here, more on translation is here, and more from us on publishing and book awards programs is here.