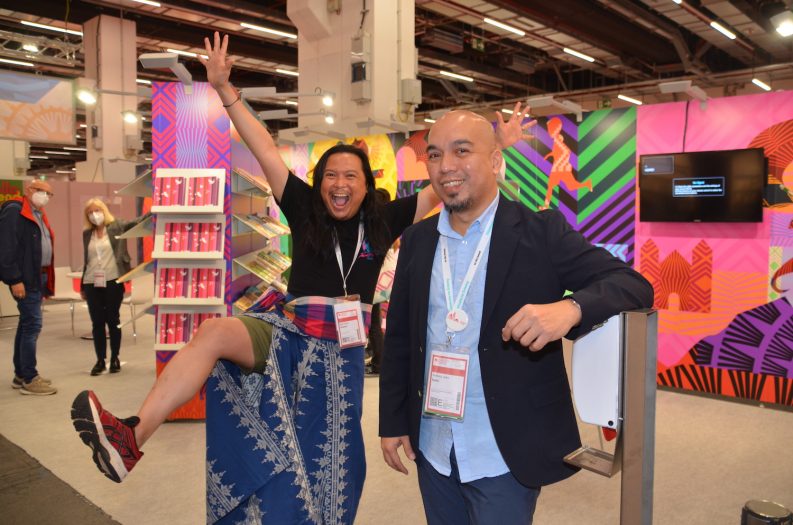 Talking up the idea of becoming Guest of Honor Philippines at Frankfurt, the stand organizers offered work from 15 publishers. 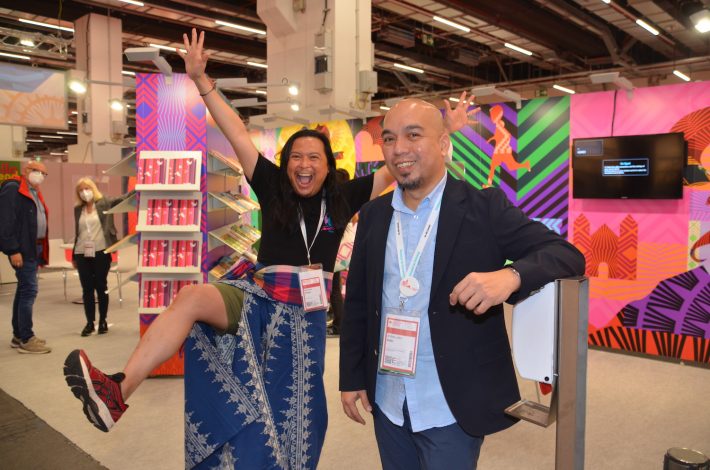 A sense for the Philippines’ aesthetics and exuberance were displayed on the market’s national collective stand at Frankfurter Buchmesse, a presence put together by the country’s National Book Development Board. The organization has been exhibiting at Frankfurt since 2014 and plans to bid for the Philippines to be guest of honor at the trade show in 2025.

Titles from some 15 publishers were displayed on the vibrant stand, which was painted in vivid colors, rather like the famously decorative “jeepneys,” those jitneys converted from Jeeps for public transport in Manila.

“We have children’s books, YA, graphic novels, and contemporary literature here,” Balisi said, “and we’ve been talking to Litprom“—a German company that promotes the Global South—”as well as to graphic-novel publishers to exchange ideas and maybe sell some rights.”

There are approximately 850 publishers in the Philippines, most of them educational.  In 2019, the total book market was estimated at US$94 million, with 80 percent of revenue coming from educational content. National Book Store is the main retail chain with 200 stores nationwide.

The market had been growing until the coronavirus COVID-19 pandemic struck. Reportedly, things are coming back, now, in part thanks to financial support from the government.

The theme of the collective stand at Frankfurt was “Myth, Magic, and the City: Reclaiming Our Narrative.” It was envisioned by Charisse Aquino-Tugade, National Book Development Board executive director, and designed by Jowee Alviar of Team Manila.

Balisi said that the design was intended to “weave together images from Philippine mythology and iconic images of the city. So you have the tikbalang—half man, half horse; the pink sails of the vinta, our traditional boats; and the brightly coloured jeepneys being chased by a boy.”

The effect, as he described it, was “a series of panels, each one serving as a piece in the narrative creating a rich tapestry of Philippine culture and identity.”

Balisi is also an author, himself.  He studied anthropology and has written two social science textbooks as well as short fiction that appeared in an anthology.  He joined the National Book Development Board in 2017 and is says he’s still writing when he has time.

“Our participation in the fair this year,” he said, “is another step on our long journey to be guest of honor.”